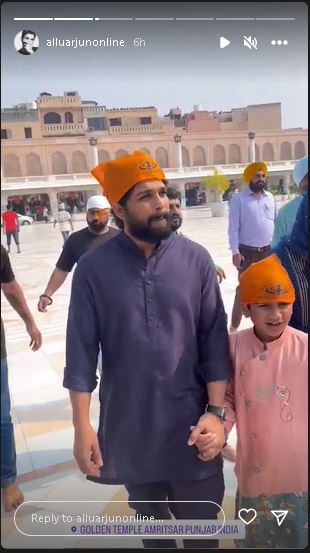 South actor Allu Arjun, on Thursday, visited the Golden Temple, Amritsar, on the occasion of his wife Sneha Reddy’s birthday.

Taking to Instagram, the ‘Pushpa’ actor shared a string of videos on his story in which he could be seen taking blessings at the Golden Temple.

The actor shared a picture of the Temple and captioned it as, “MAGICAL”.

The superstar along with his wife and kids had donned traditional attires, which made them look like a beautiful family.

Allu Arjun is known for his amazing masala entertainer films like ‘Ala Vaikunthapurramuloo’, which is currently being remade in Bollywood as ‘Shehzada’, ‘Sarrainodu’, ‘Arya’, ‘Arya 2’ and many more. The actor enjoys a very big fan following.

Recently the actor was seen representing India globally as the grand Marshall in the India day parade in New York.

Meanwhile, on the work front, he will be next seen in Pushpa 2 along with Rashmika Mandanna and Fahadh Faasil.

The official release date of the film is still awaited.