At the centre of the row is a scene with Zeeshan Ayyub, in the role of college student Shiva, playing the Hindu god Mahadev in a theatre production 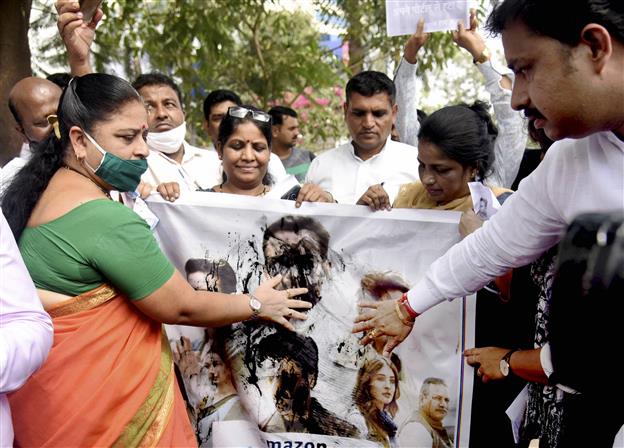 BJP workers stage a protest against Amazon Prime over its controversial web series Tandav, at Bandra in Mumbai. PTI

The cast and crew of Amazon Prime Video series “Tandav” on Tuesday said they have decided to implement changes to the political drama to address concerns.

At the centre of the row is a scene with Zeeshan Ayyub, in the role of college student Shiva, playing the Hindu god Mahadev in a theatre production.

In an official statement, the team reiterated that they had no intention to hurt anyone’s sentiments.

“We have utmost respect for the sentiments of the people of our country. We did not intend to hurt or offend the sentiments of any individual, caste, community, race, religion or religious beliefs or insult or outrage any institution, political party or person, living or dead.

“The cast & crew of ‘Tandav’ have made the decision to implement changes to the web series to address the concerns raised towards the same,” the statement read.

The team also thanked the Ministry of Information and Broadcasting for the guidance and support in the matter.

“We once again apologise if the series has unintentionally hurt anybody’s sentiments,” the statement said. — PTI