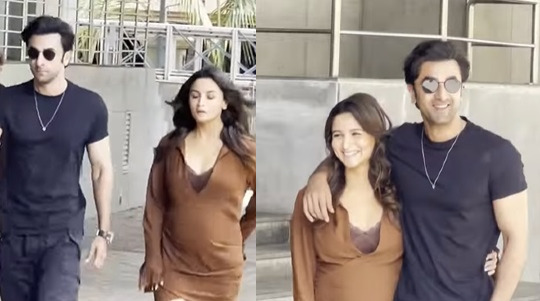 Alia Bhatt and Ranbir Kapoor, who are expecting their first child, were spotted in Mumbai on Saturday. The couple were attending the special preview of song Deva Deva from their upcoming Brahmastra. The director of Brahmastra, Ayan Mukerji was also present on the occasion.

During their outing, Alia and Ranbir smiled and posed for the paparazzi. Alia looked stunning in an all-brown mini dress with her baby bump quite visible. She teamed the dress with a pair of heels. The 29-year-actress kept her hair loose and went for minimal makeup look with her pregnancy glow doing the trick.

Their fans poured love on the video as they couldn’t get over Alia’s baby bump.

Take a look at their videos:

Alia also shared some photos in the brown dress on her Instagram. In the caption, she wrote, “All set to see deva deva with the press … & my little darling #DevaDeva out on the 8th of August! "

Alia’s maiden production Darlings was released on Netflix on Friday. The movie that stars Alia along with Shefali Shah, Vijay Varma, Shefali Shah and Roshan Mathew opened to some good reviews.