Kundra and Thope were produced before a magistrate's court here 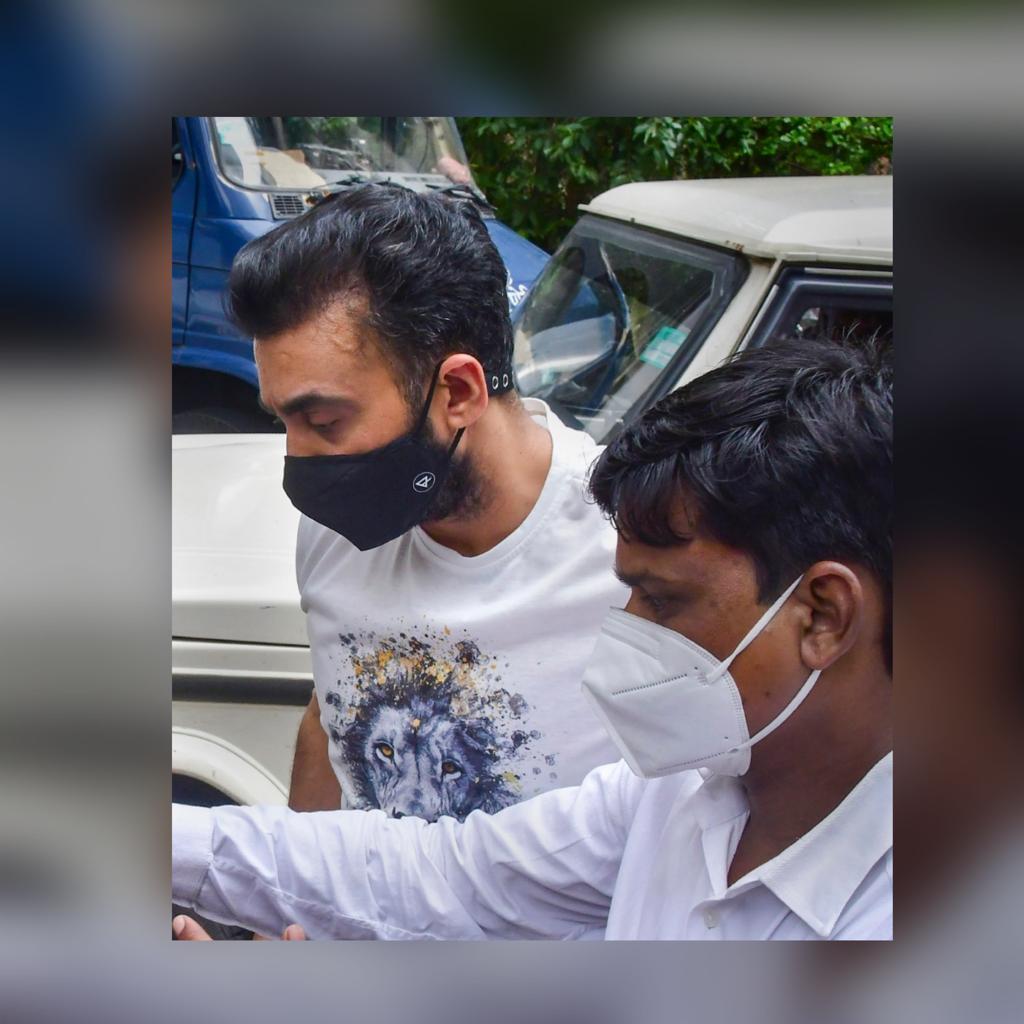 Raj Kundra, brought to property Cell Unit of Crime Branch office, after being produce in Esplanade Court as he was arrested in the pornography-related case, in Mumbai on Tuesday, July 20, 2021. — PTI

Kundra (45), husband of Bollywood actor Shilpa Shetty, was arrested by the Mumbai crime branch on Monday night in a case, which it said, related to the alleged creation of pornographic films and publishing them through some apps.

The police claimed there were several WhatsApp chats that revealed Kundra was involved in the financial dealings of apps and their contents.

The police also said three women have come forward with complaints in the case, saying they were "forced to act in pornographic movies".

The accused persons took advantage of struggling models, actors and other workers, and made them work in these pornographic movies, the police said, adding these movies were shot in rented bungalows in Mumbai.

Kundra was taken into custody after being booked under relevant sections of the Indian Penal Code and the Information Technology Act.

The police also arrested another person, identified as Ryan Thorpe, who was working on a senior position with an app firm, from his office along with Kundra after an enquiry into the matter, an official said.

Kundra and Thope were produced before a magistrate's court here, which remanded both of them in police custody till July 23.

The police, while seeking maximum custody of Kundra, told the court that the businessman was economically gaining by making and selling pornographic material.

In their remand note, the police alleged that the accused persons "made profits in lakhs in this illegal business of making pornographic films and uploading the same via some mobile apps for which subscription fees is taken from viewers".

The police further alleged that the pornographic material was uploaded on an app 'HotShots' that was developed by a company, Arms Prime Pvt Ltd, owned by Kundra.

They said another arrested accused Umesh Kamat, a former employee of Kundra, told police that the app was later sold to Kenrin Pvt Ltd, a c owned by Kundra's relative Pradeep Bakshi.

The police said they have seized Kundra's mobile phone and its contents need to be scrutinised and also his business dealings and transactions have to be looked into.

They said Kundra's custodial interrogation was required as he had to be confronted with the other accused in the case.

Appearing for Kundra, senior counsel Aabad Ponda and advocate Subhash Jadhav opposed the police's plea for remand and said the investigation into the case can be carried out without custodial interrogation.

Ponda argued that the police ought to have issued summons to Kundra first and recorded his statement, instead of arresting him directly in the case that was registered in February this year.

The magistrate, after hearing arguments, passed an order remanding Kundra and Thorpe in police custody till July 23.

As the case hit headlines, an actress claimed in an undated video in circulation on Tuesday that she was offered a role in a web series allegedly being produced by Kundra but was asked to audition for the part in the nude.

In the video, actress Sagarika Shona Suman said she had received a call from Umesh Kamat, a co-accused, during the coronavirus-induced lockdown and was offered a part in a web series being produced by Kundra.

She claimed after she showed a willingness to act in the web series, Kamat allegedly asked for an audition in the nude via video call.

Suman, who claims to be part of the film industry for the past three to four years, said when she joined the audition via video call, three people had joined in, "one of whom may have been Kundra".

Earlier, the police on Monday said Kundra appears to be the "key conspirator" of the case.

"There was a case registered with the Crime Branch Mumbai in February 2021 about the creation of pornographic films and publishing them through some Apps. We've arrested Mr Raj Kundra in this case on 19/7/21 as he appears to be the key conspirator of this. We have sufficient evidence regarding this," police commissioner Hemant Nagrale said in a statement on late Monday night.

An FIR was registered against Kundra after a woman approached the police and made certain allegations in her complaint, another official had said.

On that basis, the FIR was registered and the case transferred to the Crime Branch.

Kundra was booked under Indian Penal Code Sections 420 (cheating), 34 (common intention), 292 and 293 (related to obscene and indecent advertisements and displays), and relevant sections of the IT Act and the Indecent Representation of Women (Prohibition) Act, the official said.

This is the second case that Kundra faces in connection with the alleged creation of pornographic content.

He had applied for anticipatory bail last month in connection with a case registered earlier by the Maharashtra cyber police in 2020.

In that case, also, the cyber police had registered an FIR against various platforms, which, they alleged, were involved in showcasing pornographic content.

The sessions court is yet to hear the anticipatory bail plea. — PTI