With ‘Venom: Let There Be Carnage’ released theatrically, trade has its hopes high 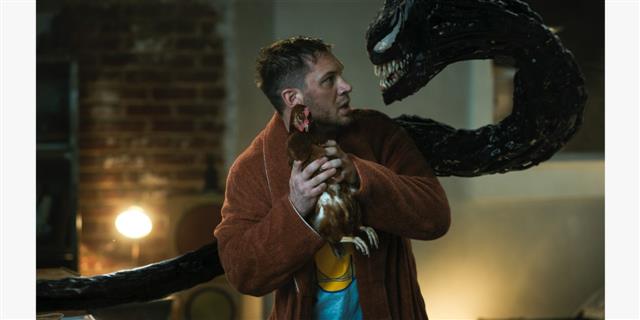 A still from ‘Venom: Let There Be Carnage’.

Amidst the ongoing discussion abou the fate of big screen entertainment post COVID-19, Sony Pictures’ sequel, ‘Venom: Let There Be Carnage’, has managed to shatter all pandemic-era benchmarks with a stunning $90.1 million domestic debut in the US. The Tom Hardy and Woody Harrelson biggie also made huge waves internationally with a blockbuster opening of $13.8 million in Russia, the largest ever for Sony in that market.

And now the epic saga revolving around one of Marvel’s greatest and most complex characters, is all set to conquer the Indian box-office in Hindi, English, Tamil, and Telugu in 3D, IMAX, 4DX.

The slick Andy Serkis directorial has released today and trade analyst Ramesh Bala says, "To say that the franchise has a huge following in India would be an understatement. The extended closure of cinema halls across the country has made people hungry for big-screen entertainers that offer them not just emotional engagement but staggering visual effects and this film promises to be the whole package. I think it will energise the trade circles, bring audiences back to theatres in droves and smash box-office records."

Trade analyst Sreedhar Pillai added, "The fact that the film is releasing in multiple South-Indian languages will help it to reach a large demographic of potential and pre-existing Venom fans and the time of the film’s release right in the middle of the festive season, is also just perfect. It us sure to live up to the success it has already enjoyed globally."

Girish Johar, producer and film business expert says, "Venom has done fantastic business in Hollywood. With the pandemic being a little on the subside and the vaccination process being increased, there is a lot of curiosity among audiences. They have been waiting to enjoy big screen entertainment again. I am indeed very optimistic because the film has not only got Box Office numbers overseas but it has also got fantastic feedback and reviews. I really hope that the same process is replicated in India as well."

Trade veteran Atul Mohan says, "The largest number of ticket buying fans is waiting to see a film like this for a long time on the big screen. Sony Pictures’ strategy to address the linguistic needs of a diverse and multi-lingual fan base should act as the right push."

Rajender Singh Jyala, chief programming officer, INOX Leisure Limited says, "Venom: Let There Be Carnage’ has created a new weekend box office record in the US post-pandemic. WE've seen in the past, Marvel enjoys a great fan following in India, hence there is lots of buzz around the film."

Thomas D'souza, Senior Vice President Programming, PVR Limited says, "Superheroes from the Marvel Army are enticing the audiences back to the cinemas. The enthusiasm of audience captivated by Marvel films is very contagious indeed and we are excited about ‘VENOM: LTBC’, which has had a great opening in other countries."