He’s turned 92, the party is into its 100th year. I was born an Akali, will die an Akali, says Parkash Singh Badal 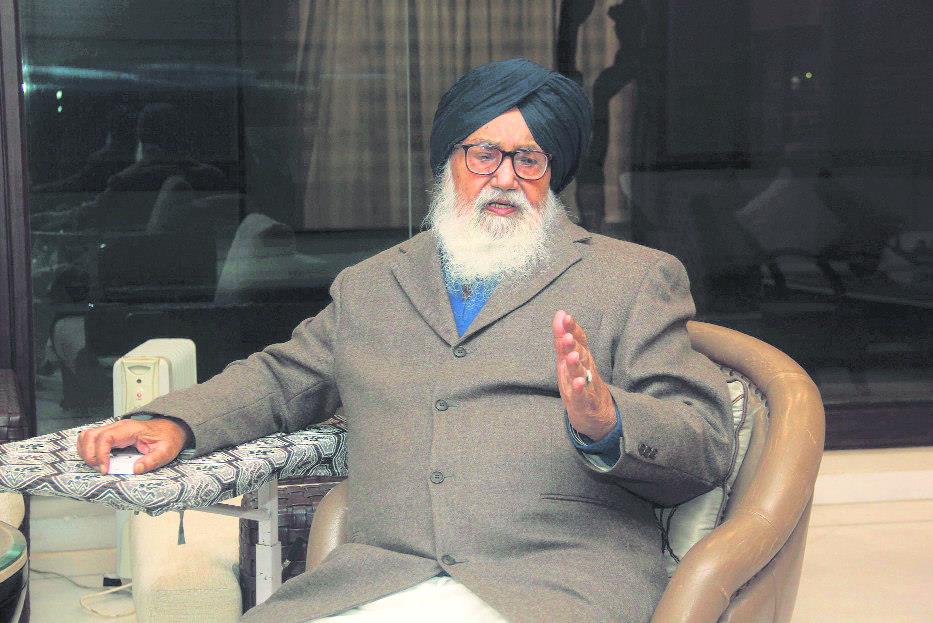 Former Chief Minister and party patriarch Parkash Singh Badal speaks about the history and evolution of the Shiromani Akali Dal. Excerpts from an interview:

How did you get associated with the Shiromani Akali Dal?

My father and grandfather were active participants in the ‘Singh Sabhas’ during their times. I made no effort to get connected or be associated with the party. I am a born, thoroughbred Akali. I will die an Akali.

At one point of time, SAD had even tied up with the Congress in the state.

I, personally, was never connected with the Congress. In 1957, the Akalis contested as Congress candidates in connection with a planned ‘Regional Formula’ concerning our demand for a Sikh state. Soon, our leader Master Tara Singh found that ‘regional power’ actually meant no power for the Sikhs. Congress Chief Minister Partap Singh Kairon did not listen to our demands. In fact, I was arrested during that time and sent to Hoshiarpur jail. Minister Kartar Singh, who was from our party, came and met me there. I told him not to send me out of jail or else people will start doubting my integrity.

What in your opinion has been SAD’s strength?

Commitment to the cause of Sikhism is the strength of our party. I will cite one small example. I did not attend the wedding of my own daughter while in jail. There are hundreds of stories of fellow workers who sacrificed their personal interests, even bigger than mine, during the long journey of making our party relevant in the Indian polity.

The original SAD has fragmented into smaller groups with tall leaders walking out of the core group, including Longowal, Talwandi, Barnala and Tohra. Was it because leaders were disillusioned with unfulfilled promises for Sikhs?

The SAD has always remained one. When our respected leaders, including Harchand Singh Longowal, Jagdev Singh Talwandi, Gurcharan Singh Tohra and Surjit Singh Barnala, chose to walk away, it was their personal choice. They failed to click separately because people identified themselves with the original party, which was ours. This was clearly indicated in subsequent election results. We formed five governments. Yes, people do sometimes get sentimental as in 1989 when the Simranjit Singh Mann-led SAD won nine out of 13 Lok Sabha seats. However, soon people realised that their thinking was more aligned with us and they returned to the fold.

After Ranjit Singh Brahmpura, Sewa Singh Sekhwan and Rattan Singh Ajnala formed Shiromani Akali Dal (Taksali) not so long ago, senior leader Sukhdev Singh Dhindsa had spoken of the need for a change in the party leadership (read, Badals). Your reaction?

I will not like to comment on what senior leaders say. We have had another election for the party leadership (Sukhbir, 57, the former Punjab Deputy Chief Minister became the SAD chief for the third time in a row on Saturday). I don’t know why certain forces are reacting to my son Sukhbir Badal’s place in politics. He has earned it with his hard work. His work speaks for itself. He is born and brought up in an environment of politics. When a child of a doctor, lawyer or even a journalist, for that matter, joins the same profession, what is wrong in Sukhbir joining politics? Our country is replete with examples.

The Bharatiya Janata Party, originally Jana Sangh, had never supported the SAD demand for a separate state for Sikhs. How did the alliance come about for the SAD, which was an ethno-nationalist front for safeguarding Sikh identity?

Our party passed a resolution to ally with the BJP when Atal Behari Vajpayee was the Prime Minister in 1997. We identified our requirements with the roadmap for development he showed us during his political journey. We did interact a little before that. You see, secularism is an idea very often not properly interpreted even by the media. Like, Sikhs by faith are truly secular but we often see that they are branded as hardliners. No religion teaches communalism. Can we ignore the fact that our alliance partner has given us the oil refinery, AIIMS campus, a Central University and world class roads, just to name a few?

Differences between Akali leaders is not a new occurrence. Leaders like Master Tara Singh and Sant Fateh Singh too had developed differences.

We never questioned our party leadership, so I will not like to offer any comment. We were only dedicated workers and carried out the task entrusted to us without ever desiring to be given any post. Master Tara Singh was a very tall leader whom I consulted during crucial moments in my journey.

The Shiromani Akali Dal is often referred to as a party of demonstrators.

The image is linked to our inborn habit of standing against ‘zabar janah’ (injustice). Not tolerating injustice is ingrained in the mind of an Akali. Everyone remembers SAD’s participation in agitations during Emergency imposed by Indira Gandhi in 1975. Ours was the only party, in the entire country, which protested against the government from day one till the end and filled the jails. Once dedicated to a cause, an Akali never turns his back.

I have no words to offer for the tragedy that occurred on the pious occasion of martyrdom day of Guru Arjan Dev at our sacred shrine in 1984. Thousands died without any justice. The same happened during riots after the assassination of Indira Gandhi. No real justice ever came to hundreds butchered on the streets all over the country. Who can forget the callous reaction of Rajiv Gandhi when he said that ‘earth shakes when a big tree falls’.

How does the party react to the demand for Khalistan?

Khalistan was an emotional public issue under the conditions prevailing in the state at that time. The SAD does not demand a separate nation. Our leaders had sided clearly with India during Partition. During the wars of 1962 and 1965, Sikhs had shown their commitment for the country on the national borders.

Punjab could not get Chandigarh as its capital despite repeated party announcements and agitations.

What would be the priority of SAD at this moment?

We are demanding the SYL canal waters. Very simply, under the riparian principle, the parent state where the water flows has the right to the flowing water. In our case, water is being given to Haryana and Rajasthan. Under the existing conditions of underground water levels falling very rapidly all over the state, our party workers are being forced to come on the roads.

The SAD seems to have lost its steam in demanding more power for states under a federal structure. What do you have to say on that?

We are sitting quiet, but are still very clear about the desirability for states being given more autonomy on issues concerning the state administration. Now we have to look to the Centre for even small things. Each state has a different makeup and needs attention accordingly. Many more states think on our lines but the power structure in our country does not allow it.

Do you find any difference in the SAD of earlier times and today?

Youngsters of today want power. We were brought up on the path of struggle. This is the biggest missing link in the youth of today. We walked our way from bottom to top, while they would like to paratroop from the skies.