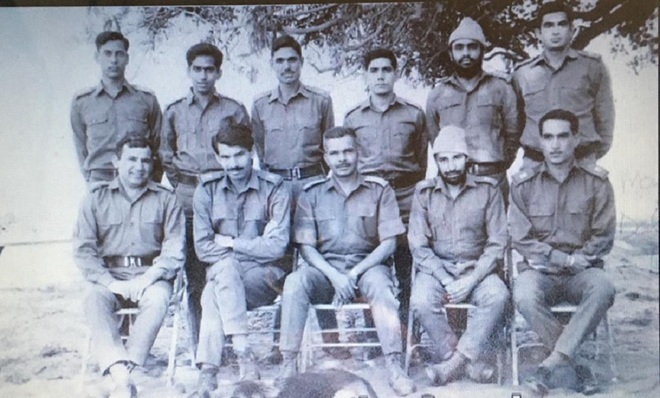 In this group photograph of the 3rd Grenadiers, Lt Col Ved Prakash Airy, MVC, is seated in the centre. To his left is Maj Hoshiar Singh, PVC, and to his right, Maj SS Cheema, SM.

On December 3, 1971, at last light, the PAF simultaneously attacked the forward Indian airfields, including the Advance Landing Ground at Faridkot. When the expected pre-emptive ground attack by Pakistan did not materialise, the Indian Army decided to cross the International Border on the western front and enter the Shakargarh Bulge at dusk on December 5, with troops advancing on a broad front between Degh Nadi in the north and Ravi river in the south-east. The plan of the 54 Infantry Division, spearheading the advance, envisaged launching of operations against Zafarwal-Rajian-Dhamtal from general area Mawa-Galar, establishing a bridgehead across Basantar Nadi and capturing the Supwal Ditch.

The task allotted to 54 Infantry Division also included the destruction of Pakistan’s 8 (Independent) Armoured Brigade and the capture of Zafarwal. After some preliminary operations en route, its 47 Infantry Brigade was ordered to establish a bridgehead west of Basantar Nadi to include areas Barapind-Lalial RF-Sarajchak and south-west shoulder of Supwal Ditch during phase 1 of the Divisional attack, followed by capture of Jarpal and Lohal in the second phase.

The Pakistan army had predictably concentrated the bulk of its armour to the west of Basantar between Supwal Ditch and Zafarwal and waited for the enemy armour to enter the dragon (chakravyuh). The Indian armour entered the chakravyuh and smashed it, but not without losing Second Lieutenant Arun Khetarpal, its Abhimanyu.

During the 1971 war, from the battles fought on the western front between Degh Nadi and Bein river emerged two Param Virs (Major Hoshiar Singh of the 3rd Grenadiers and Second Lieutenant Arun Khetarpal of The Poona Horse); eight Maha Virs, including Lieutenant Colonels VP Ghai, VP Airy and Havildar Thomas Phillipose, and many more who outperformed themselves and won Vir Chakras and other awards for their bravery.

Lt Col Ved Prakash Ghai, an alumnus of Mission School and DAV College, Dehradun, while commanding 16 Madras, raised in 1819 as the 2nd Travancore Nair Infantry, led it from the front and blunted three determined counter-attacks by the enemy to dislodge his battalion from the bridgehead established by his Madrasis. He was killed in action but not before ensuring that his gallant Thambis held on to the bridgehead they had established at a heavy cost.

Lt Col Ghai was awarded the Maha Vir Chakra for outstanding command of his battalion during the bridgehead battle. The excerpts from the battle account read:

At 7:30 pm on December 15, during phase 1 of the Division attack, Lieutenant Colonel Ved Prakash Ghai, commanding 16 Madras, led his battalion for the capture of Lalial and Sarajchak as part of the bridgehead operation. The positions were captured after some of the sharpest hand-to-hand encounters. The enemy launched many counter-attacks at night to dislodge the battalion but under the inspiring leadership of Lt Col Ghai, his men beat back all attacks.

As the day dawned, the enemy again launched a determined counter-attack supported by artillery and armour. With utter disregard to personal safety, Lt Col Ghai moved fearlessly from one Company position to another encouraging his men. Inspired by his fearlessness, bravery and leadership, the battalion repulsed the attacks with heavy losses to the enemy. However, a stray bullet by the withdrawing enemy caught him in the chest, wounding him seriously. Before he could be evacuated, Lt Col Ghai died on the battlefield but not before ensuring that his battalion held onto the bridgehead for three nights and two days steadfastly against all possible odds.

Havildar Thomas Phillipose from Kerala was a Non Commissioned Officer in 16 Madras. During the 1971 war, his and the platoon’s dare-devilry during the bridgehead battle proved beyond doubt that the Madrasis (men in Indian Army belonging to Kerala, Tamil Nadu, Karnataka, Andhra Pradesh and Telangana) are no less martial than the maliciously created martial classes by the British.

Havildar Thomas Phillipose was platoon commander in one of the companies of 16 Madras occupying the bridgehead across Basantar. During a counter-attack, after causing heavy casualties, the enemy captured a portion of the bridgehead after overpowering one of the forward sections of his platoon. Realising the criticality of the situation, Havildar Thomas rallied the meager strength of his platoon, sounded the battle cry ‘Veer Madrasi Adi Kollu-Adi Kollu-Adi Kollu (Brave Madrasi Hit and Kill – Hit and Kill – Hit and Kill)’ and led the dash with bayonets drawn. The spontaneous action inspired the small force of Madrasis to the hilt. During the dash, although he received a bullet on his left shoulder, wounding him severely, Thomas did not stop. The charge led by him was so determined that the enemy fled without giving a fight.

For his conspicuous gallantry, Havildar Thomas Phillipose was awarded the Maha Vir Chakra. Major PV Sahadevan and Naik Sahadevan of 16 Madras, too, performed beyond the call of duty and earned Vir Chakras.

Lieutenant Colonel Ved Prakash Airy, an alumnus of Government School, Karnal, took over the command of the 3rd Grenadiers in April 1971. In the morning hours of December 5, the battalion, as part of 47 Infantry Brigade, was ordered to cross the IB and ‘Bash on Regardless’ (the motto of 54 Infantry Division).

On the night of December 5/6, the 3rd Grenadiers crossed the International Border. The first interference from the enemy’s infantry and armour came up at Bhaironath. With the bold planning by Lt Col Airy and dauntless courage by his paltan, by the first light on December 6, not only was the defended locality captured, but also taken were three prisoners of war and two Sherman tanks with Patton turrets.

The battles fought and won so far were only part of the preliminary operations. For the main task, the 3rd Grenadiers spearheaded Phase 2 of the 54 Infantry Division attack and, under the leadership of Lt Col Airy, did more than enough to earn the title of ‘PVC Battalion’ by capturing the heavily defended Jarpal deep inside Pakistan.

During the iconic battle, the 3rd Grenadiers not only captured the heavily defended Jarpal, but with support from the tanks of The Poona Horse and the guns of Divisional Artillery, including those of 161 Field Regiment and 75 Medium Regiment, held on to it defeating repeated enemy counter-attacks.

The 3rd Grenadiers was tasked to capture the heavily defended localities of Jarpal and Lohal on the night of December 15/16, with a view to establish a bridgehead on Basantar Nadi for the tanks to break out. Lt Col Airy led his troops fearlessly even when his men were fighting the enemy hand-to-hand. Though the casualties of the battalion were marginally high, both objectives were captured. But after regrouping, the enemy counter-attacked in the morning hours on December 16, followed by the attacks supported by the tanks to dislodge the Grenadiers from the bridgehead but all the counter-attacks were ruthlessly beaten back one after the other.

During the battle, unmindful of his personal safety, Lt Col Airy moved from one Company to the other, with just his cap balaclava as headgear, motivating his men to hold the captured ground. Noticing the firm resolve of the Grenadiers, the enemy finally retreated with heavy losses.”

During the battle of Jarpal, ‘C’ Company of the 3rd Grenadiers under the command of Major Hoshiar Singh beat back repeated counter-attacks. Maj Singh was awarded the PVC.

The ‘B’ Company of the 3rd Grenadiers, under the command of Major SS Cheema, which was defending Jarpal adjacent to the ‘C’ Company of Maj Hoshiar Singh, too, repulsed repeated counter-attacks against all possible odds. For his exemplary leadership, Maj Cheema was awarded the Sena Medal (gallantry). Lance Havildar Jaswant Singh and Grenadier Ram Kumar also made the battalion proud by winning Vir Chakras.

After winning the toughest battle, Lt Col Airy, before endorsing the bravery of his battalion’s officers and men, did the honour to the bravehearts of the supporting arms, including Second Lieutenant Khetarpal of The Poona Horse, Captain Satish Sehgal of 75 Medium Regiment, Major Prahalad Toro of 161 Field Regiment and Captain RN Gupta of 9 Engineer Regiment.

Regarding endorsement of the bravery of Second Lieutenant Khetarpal, there is a piece of history that personifies the strong inter-arm camaraderie. Maj Cheema, commanding ‘B’ Company of the 3rd Grenadiers, along with his forward platoon, while fighting the enemy infantry with baited breath and at a visible distance, watched Arun in action. Even after his tank got hit, Arun did not abandon it (since the tank gun was still firing) and singlehandedly destroyed three enemy tanks from as close as 75 yards before dying a hero’s death. After the battle, Maj Cheema (from Infantry) narrated the most conspicuous bravery of Second Lieutenant Khetarpal (from Armoured Corps). And Lt Col Airy, a thorough professional, proudly endorsed the submission.

After the war, a senior General officer from the Pakistan army remarked, “If two armoured regiments (13 Lancers and 31 Cavalry) of our army could not evict two Indian infantry companies (Hoshiar’s and Cheema’s of 3rd Grenadiers) supported by just a squadron of armour (of The Poona Horse), it was foolhardy to pitch 35 Frontier Force battalion against them. It was nothing short of hara-kiri, suicidal.”

Incidentally, C (Sikh) Squadron of 13 Lancers, at Partition, formed part of The Poona Horse. So, during the 1971 war, in effect, the ‘son’ was fighting the ‘father’. And among the defeated 13 Lancers (by The Poona Horse) was the Officer Commanding B Squadron, Major Jehangir Karamat, who later became Pakistan’s COAS.

Lt Col Airy also displayed a high level of morality and professionalism by recommending Lt Col Mohd Akram Raja, Commanding Officer of 35 Frontier Forces, his counterpart, whose body was recovered with bullet marks on the forehead and right hand with a firm grip on his gun, for the highest gallantry decoration in Pakistan. The handwritten citation did not go unnoticed. Lt Col Raja was awarded ‘Hilal-i- Jur’at’, Pakistan’s second highest gallantry decoration.