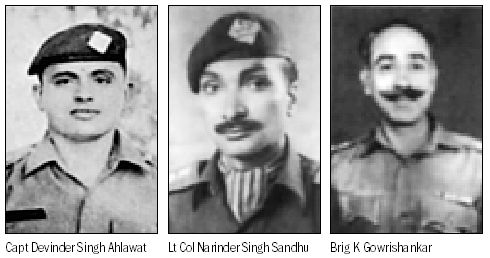 The community hall in Beri village in present-day Jhajjar district of Haryana has an old black marble stone on which are engraved in golden letters the names of the bravehearts from the villages around who laid down their lives in the service of the nation during World War I and II. A close look at the long list reveals that Gochhi village has the maximum number of names. It also has the maximum number of families with a military background, some even going back to five generations.

Captain Devinder Singh Ahlawat was a third generation soldier; his grandfather fought in World War I and his father was part of live action in World War II and also during India’s wars in 1947-48, and 1962. Devinder, son of Lieutenant Colonel Subha Chand Ahlawat, was born on July 4, 1947 at Gochhi village in Rohtak district of then undivided Punjab.

After a year in Government College, Rohtak, he joined the National Defence Academy and was commissioned into 10th Battalion of The Dogra Infantry Regiment on December 15, 1967. The battalion was raised by Lt Col Kapur Singh Ahlawat on June 1, 1966. 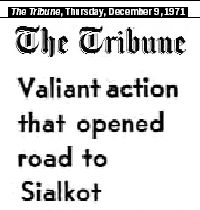 Dogras have throughout outperformed themselves in all the wars fought since World War I, but a battalion earning two Maha Vir Chakras within just about five years of its raising speaks volumes of the training, commitment and dedication of its men and officers. 10 Dogra is proudly referred to as ‘Terrific Tenth’.

While raising 10 Dogra, Lt Col Ahlawat, also incidentally from Gochhi, never imagined that his own bhatija (nephew) would join it and make his battalion proud.

The India-Pakistan border in Punjab generally follows the Ravi river between Gurdaspur and Attari and Sutlej between Ferozepur and Fazilka. There are three bridges over these two rivers at Dera Baba Nanak (DBN), Hussainiwala and Sulemanke. Of these, the bridges at DBN and Sulemanke were under Pakistani control. The areas east of these two bridges gave the Pakistan army readymade bridgeheads where from it could launch its strike formations across the border into Indian territory.

It was necessary to eliminate the Pakistani enclaves at DBN and Sulemanke to prevent Pakistan from using them as launch pads for any offensive. 10 Dogra and 71 Armoured Regiment were tasked to capture the east-end of DBN bridge near the enclave, which was heavily fortified by the enemy with concrete pillboxes and bunkers.

In the first phase, ‘Alpha’ and ‘Bravo’ companies of 10 Dogra were to capture the depth bundh, bundh junction and river bundh. In the next phase, ‘Delta’ company commanded by Major Inder Singh and ‘Charlie’ company by Devinder Ahlawat, now a Captain, were tasked to capture the link bundh, rail bundh and road bundh.

The companies made steady progress in decimating the Pakistanis and clearing the bundhs allotted to them. Devinder’s company was to follow ‘Bravo’ and clear the most formidable link bundh in the second phase. And the intrepid Ahlawat led his company from the front and cleared the supposedly impregnable bundh which cost him his life, but for the ultimate cause and in the best traditions of the Indian Army. The grateful nation recognised the conspicuous bravery of Captain Devinder Singh Ahlawat and awarded him the Maha Vir Chakra, posthumously. The battle account reads:

“During the 1971 India-Pakistan war, 10 Dogra was tasked to capture Dera Baba Nanak bridgehead on the night of December 5/6. As per the battalion attack plan, ‘C’ company led by Captain Devinder Singh Ahlawat was to capture east-end of the bridge on which the enemy defences were based on a series of concrete embankments with anti-tank guns and heavy automatic weapons. The company, led by Captain Ahlawat, came under heavy machine gun fire from a concrete pillbox. With complete disregard to his life, Captain Ahlawat charged onto the pillbox, grabbed the burning hot machine gun barrel with his right hand and threw a grenade into the pillbox with his left, killing the firing crew, thus making it possible to continue the momentum of the attack and capture of the objective soon thereafter. In this action, Captain Ahlawat lost his life and his body was found with six bullet wounds on his chest, and his hand still clutching the machine-gun barrel.”

Captain Devinder Singh Ahlawat met his date with fate unmarried but not unsung — the black marble sacred stone in Beri Community Hall has his name, too, engraved in golden letters. In his honour, the Army Welfare Housing Complex in Sector 56 in Gurugram, is also named after this braveheart.

Having taken over 10 Dogra just a few months before the war, Lt Col Sandhu, an alumnus of Khalsa College, Amritsar, for his dynamic leadership and bold execution of the attack plan, was awarded the Maha Vir Chakra. The battle account reads:

“On December 5, 1971, 86 Infantry Brigade Group was ordered to eliminate the Pakistan bridgehead across river Ravi, north of Dera Baba Nanak. The area consisted of a series of embankments defended by an elaborate system of concrete defence works housing machine guns, anti-tank weapons and other small arms. 10 Dogra battalion, under the command of Lieutenant Colonel Narinder Singh Sandhu, was allotted the task of capturing the east-end of the bridgehead, which was the hub of the enemy defences in the area. Lieutenant Colonel Sandhu led his battalion most skillfully when the men fought from bunker to bunker to capture the objective. In the bitter fighting, he was seriously wounded in his leg; however, with complete disregard to his own safety, he continued to lead his men with cool courage and determination. His exemplary conduct and inspiring leadership so enthused his men that the vital objective was captured with minimum casualties to the battalion.”

The conspicuous courage and outstanding leadership of Brigadier Krishnaswamy Gowrishankar, Commander of 86 Infantry Brigade, originally from Corps of Signals, too, did not go unnoticed. For his boldness and originality in planning and execution of the offensive, he was awarded the Maha Vir Chakra.