What started as a humble effort to help the neglected has now become a mission for ensuring the overall development of differently abled and destitutes. Conceived in the serene environment of Gurdwara Dehra Sahib, Lahore, the Pingalwara society has been taking care of the needy for decades. Tribune correspondent PK Jaiswar & lensman Vishal Kumar explore the legacy of messiah Bhagat Puran Singh and the philanthropic services rendered by the society. 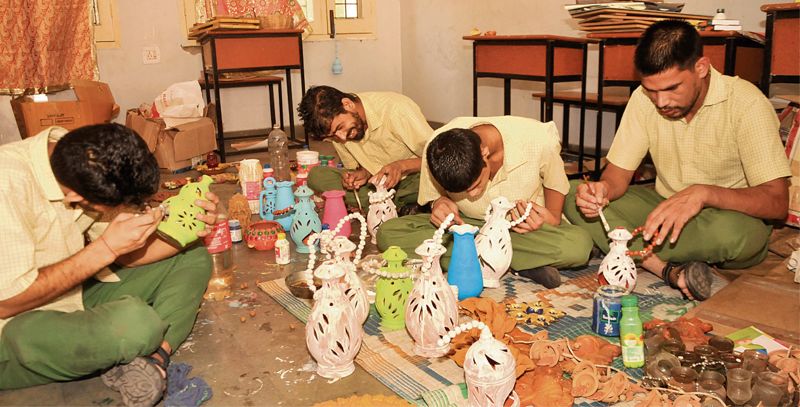 Special children give final touches to the craft work made by the students of Bhagat Puran Singh School at the Manawala branch of Pingalwara.

OVER the years, All-India Pingalwara Society has been doing a yeoman service for society and humanity by providing shelter to the destitute, handicap, elderly and mentally challenged people. They are also making them independent by involving in different constructive works.

Founded by Bhagat Puran Singh in 1957 after the Partition, the society is currently being run by its president Bibi Dr Inderjit Kaur. Now, it has seven branches. Besides having it’s headquarters and main branch near the inter-state bus terminus, Amritsar, it has its branch at Manawala, Pandori Waraich village, Chandigarh, Sangrur, Jalandhar and Goindwal Sahib. At present, it has 1,792 inmates and most of them are mentally challenged patients besides those suffering from other diseases, including cancer, TB and AIDS.

Like many other NGOs, the Pingalwara society also faced challenging times during the Covid-19 pandemic, when donations dried up. It managed to continue with their endeavour to serve the society. It has been preparing food at its langar hall.

“The school for the deaf and dumb children is unique in many aspects as it provides free education to children with sign language. A large number of students of Punjab are getting education here. The technical help for running the school is provided by US-based NGO Hope of Hope,” said Darshan Singh Bawa, Chief Administrator, of the Pingalwara society.

The Pingalwara society at present also runs two diploma courses in hearing impairment and intellectual disability. The society also have one-of-its-kind facility in the region for developing the sense organs of mentally challenged children at its Bhagat Puran Singh School of Special Education.

The Pingalwara society boasts of achievements made by their students in Special Olympics. Seven students of the society have brought laurels to the city by winning medals at Special Olympics in 2015, 2017 and 2019. This year also, a girl participated in the skating competition in Russia.

The society has been doing its bits for environment cause. It has adopted zero-budget farming that became a role model for many farmers to follow.

The society’s Bhagat Puran Singh Prosthetics Centre has been providing artificial limbs to patients suffering with disabilities such as prosthesis, orthosis, spinal braces, cervical orthosis, etc. Since its inception this facility, which is unique in North India, it has fitted with prosthesis, orthosis or assistive devices to 7,341 patients and 1,085 assistive devices have been repaired.