A shot in the arm for Indian shooters

Hosts India won an impressive 30 medals in the first international event for many shooters in over 15 months. It gave a glimpse of preparedness going into Tokyo Olympics, but the players know who they would be up against — the best in the world 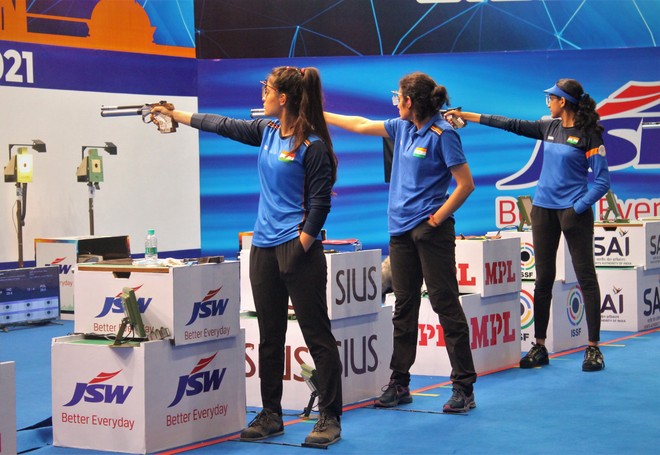 It’s the last day of the ISSF World Cup in New Delhi. The team competition in trap discipline is being played out and skeet shooter Mairaj Ahmad Khan has walked in to watch the proceedings. Looking relaxed, the 45-year-old is at the Karni Singh Shooting Ranges to push for his training proposal with the National Rifle Association of India (NRAI) officials. After the meeting, he is at the final range. “Ah! He is too slow, the target is well past him,” Mairaj indulges in commentary after a quick glance at the commentary box, which is empty.

For someone who has had disappointing outings in two back-to-back World Cups, Mairaj is relatively calm and composed. For sport watchers, his scores were a bit alarming. A meagre 113 at the Cairo World Cup in February was followed by a decent score of 121 at the New Delhi competition. Mairaj failed to make the final of either competition. It must be said, though, that the veteran lost his chance in a four-man shoot-off for two places in the finals.

“I am not worried at all about the scores. I want to peak at the right time and am in the middle of my preparation phase for the Olympics. I’m trying to fix issues with equipment and trying a few things with my technique,” Mairaj says. “I was sick in Cairo. I dragged myself for the team competition... But I do not want to make it an excuse. I wouldn’t have worried a lot even if I was perfectly OK.”

Elite sportspersons don’t go all-out every day, every competition — it’s all about peaking at the right time, at events that define their professional careers. In the Olympics year, they have their eye on an Olympics medal.

Fifteen shooters have earned India quota places for the Games, though it’s not certain that they themselves would be in Tokyo, for the final team selection would be on form and experience.

Conceding that his personal coach Ennio Falco has influenced his approach to major events, Mairaj relays a backstory from the 2016 Rio Olympics. Mairaj had an average outing at the Pre-event training (PET), a day before the competition. “Ennio was happy. He said: ‘It’s good you didn’t put in a lot of effort today.’ I have come to realise that sometimes you have to take a foot back in training. Shooting 75/75 in PET doesn’t count,” says Mairaj of his experience in Rio, where he finished a creditable ninth with a qualification score of 121.

To explain this in layman’s terms, the Khurja man says: “My coach always says: ‘You have one bottle of water at your disposal, now do you want to drink it in a World Cup or at the Olympics?’ Guess we know the answer.” Mairaj plans to fly to Italy soon, where apart from getting his stock fixed, he has plans to take part in the Italian Grand Prix and the Lonato World Cup before heading to Tokyo. “I’ll be ready for the Olympics by June.”

Back in the arena

In the pistol range, Rahi Sarnobat is equally relieved. The first major international event after a long gap is what she was yearning for. Rahi’s qualification score of 581 may not be enough to seal a spot in the final in Tokyo, however. Chinki Yadav, who won gold in 25m Pistol, qualified for the final with 580, while Manu Bhaker shot a modest 576.

Considering the time away from international shooting, and that she was coming into this competition on the back of a heel injury, for Rahi it was a decent enough outing. “My scores will improve. But more than the performance, I was keen to compete against international shooters as it is a different feeling altogether,” Rahi said. “I came here to soak this atmosphere. And I almost won a gold, so all in all I am happy.”

The big tick is, however, from the 10m Air Pistol competition, raising hopes of a medal at Tokyo. Trailblazing teen Saurabh Chaudhary and his older teammate and reigning world No. 1 Abhishek Verma gave glimpses of what they’re capable of — qualification score of 587 and 583 at Delhi would have easily put them into any major international final.

Between them, the duo won all gold medals in World Cups in the 2019 cycle and looked set to start this season with the same result, before Iran’s Javad Foroughi pipped Chaudhary in New Delhi.

“While other shooters have a set plan to peak before the Olympics, I keep it fairly simple. I need to keep myself motivated and doing well at major competitions is the only way forward for me,” Verma said of his training mantra. “I had a fairly satisfying World Cup. I may leave for Switzerland in May to get my Morini pistol serviced and be ready for the Games.”

Overall, the home contingent did well in the first international competition in over 15 months, winning 30 medals, including 15 gold. Understandably, there has been a lot of hype regarding the team’s performance, but scratch the surface a bit, and the picture is anything but rosy.

Of the 30 medals, 16, including 10 gold medals, were won in non-Olympic categories where team representation was next to nothing. Take, for instance, the 25m Rapid Fire Pistol mixed team — it had only two entries and so the gold medal match was played between two Indian teams, and Tejaswini and Vijayveer beat Abhindya Patil and Gurpreet Singh 9-1.

The biggest gain for Team India came in form of the emergence of two Chandigarh-based shooters, Ganemat Sekhon and Vijayveer Sidhu.

Ganemat, only 20, became the first Indian woman skeet shooter to win a medal, when she finished third in women’s Skeet competition. Vijayveer, in his first major international meet, came within a whisker of gold in 25m Rapid Fire Pistol.

“Indian shooters should enjoy wins. But the next competition could be harder as the Delhi World Cup was impacted by Covid-19 restrictions and many countries, including China, Russia and even Serbia, stayed away,” said an international shooter, who did not wish to be named.

Apart from tougher competitions in the lead-up to the Tokyo Games, the Indian shooting contingent has a few internal rifts to sort out before thinking too far ahead.

Celebrated pistol coach Jaspal Rana and pistol ace Manu Bhaker have had a falling out. At the heart of the problem is the emergence of Chinki Yadav in the 25m Pistol competition. Chinki has come out of the Madhya Pradesh Academy, where Jaspal is a coach.

Before Chinki, Manu was a straight pick for representing India in 25m Pistol, which could have been her third competition in Tokyo, besides 10m Pistol and mixed competition. However, a combination of a dip in form and Chinki’s upward graph has raised question marks over Manu’s future with India in the 25m pistol event.

The duo was not on talking terms during the World Cup. NRAI president Raninder Singh had to intervene and Ronak Pandit has been appointed as pistol manager of the team for better coordination.

A dip in form by a few shooters — including Apurvi Chandela, Anjum Moudgil and Tejaswani Sawant — has caused worries in the rifle contingent as well. Apurvi had a torrid time at the World Cup, to the extent she did not register a shot in the 10m Air Rifle women team bronze medal match.

Apurvi’s loss of form in the World Cup and the selection trials earlier has opened a debate over the composition of the mixed team for Tokyo. Anjum and Tejaswani, too, have had average outings.

However, Deepali Deshpande, rifle coach with the senior team, said it was wrong to question their form. “I am not worried... Rather, I am happy that they are struggling now and not in Tokyo. We still have time to fix these issues. Do not worry, we will be ready for Tokyo,” Deepali said.

After two Olympics in which India won medals, they fired a blank in Rio. Hopes are high this time, and worry is impossible to escape from.

The surge in Covid-19 cases worldwide may put a spanner in the training-competition plans of the Indian contingent. The test competition in Tokyo is all but ruled out and foreign athletes will not get any opportunity to compete at the range before the Olympics. The National Rifle Association of India (NRAI) has already hinted that the team may have to be put in a bio-bubble before the Olympics.

However, the majority of the team has plans to travel to Europe to select their ammunition or for the tune-up of guns. Skeet shooters Mairaj Ahmad Khan and Angad Veer Singh Bajwa are to fly to Italy to get stocks mended. Sanjeev Rajput wants to travel to Germany for his ammo selection. Similarly, Abhishek Verma has plans to visit the Morini factory in Switzerland. If the team fails to travel to Europe for local tourneys, then the ISSF World Cup in Lonato (May 7-17) and Baku (June 21-July 2) will be the only two competitions left for the Indians to get match-ready.

Pistol team’s high performance coach Samaresh Jung has sounded the alarm bells. “We need to be really careful since the cases are rising up. We need to look at the competitions and where we want to go... Obviously, performance is important, but the whole world does not travel. We can have local events. Our trials are very competitive.”

*These shooters have earned India a quota place