A tribute to Major Hoshiar Singh, Param Vir from 3 Grenadiers : The Tribune India

A tribute to Major Hoshiar Singh, Param Vir from 3 Grenadiers 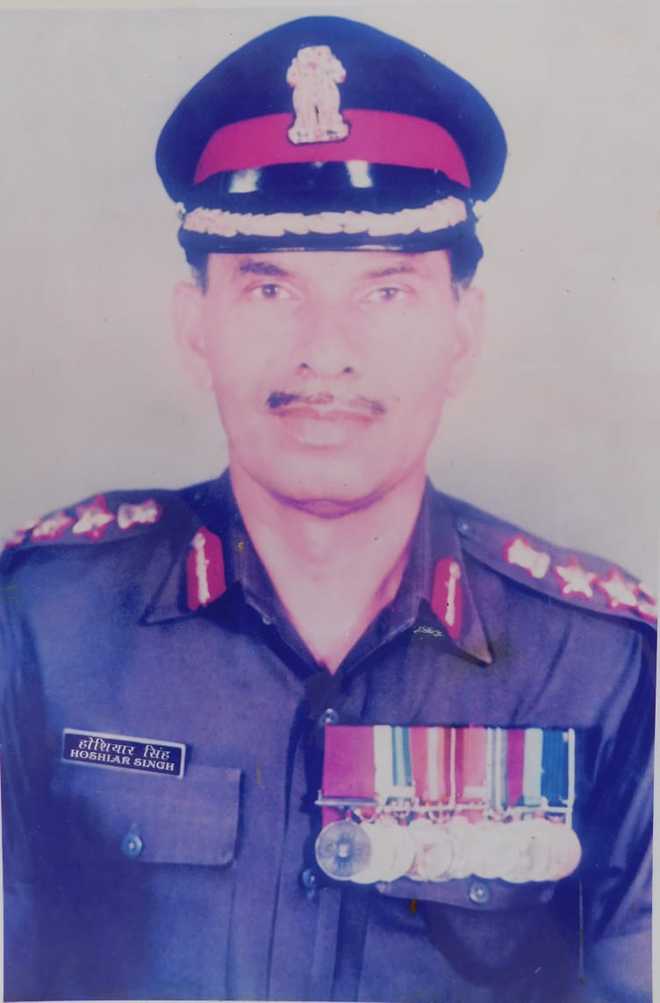 A photograph of Maj Hoshiar Singh, who retired as Colonel

Col Hoshiar Singh, PVC, undoubtedly, is a shining jewel in 3rd Grenadiers’ crown but old-timers from 2nd Jat Battalion too claim him as theirs, and rightly so; they fondly refer to him as “Mhara Hoshiare”.

Son of Ch Hira Singh Dahiya, Hoshiar Singh was born on May 5, 1936, at Sisana village in Rohtak district of undivided Punjab. Sisana is now in Sonepat. After matriculation from Jat Heroes Memorial High School, Rohtak, and first year at Jat College, also in Rohtak, he was enrolled as a Sepoy in 2nd Jat Battalion (Mooltan). An outstanding volleyball player, Hoshiar Singh was referred to as Hoshiare by his teammates. For possessing leadership and officer-like attributes, Hoshiare was selected for the Army Cadet College and commissioned into 3rd Battalion of the Grenadiers in June 1963.

3 Grenadiers, one of the oldest infantry battalions, was raised on August 4, 1768, at Bombay as 1st Sepoy Battalion. Since then, it has fought gloriously in all the wars, inland and overseas. The impressive tally of the gallantry awards won by its tall and sturdy Grinders (Grenadiers are commonly referred to as Grinders) is testimony to the stuff they are made of. Hoshiar Singh carried forward the rich legacy and took it to the highest level by earning the Param Vir Chakra during the Battle of Basantar (Jarpal) in the 1971 third round with Pakistan in the western theatre.

The Battle of Basantar encompasses the entire gamut of battles and skirmishes that took place in the Shakargarh sector, that includes ‘Jarpal Complex’ and the surrounding areas. It was an area of strategic importance. If the enemy continued to hold Jarpal and the area around, it would threaten the Pathankot-Jammu road, the lifeline of Jammu and Kashmir. 3 Grenadiers was tasked with capturing Jarpal across Basantar nullah before the enemy reinforced the defences around it.

It was for his exploits during this iconic battle to capture and hold Jarpal that Hoshiar Singh, now a Major commanding Charlie company of 3 Grenadiers, was awarded the PVC, the highest gallantry decoration in the face of the enemy.

“On December 15, 1971, 3 Grenadiers Battalion was given the task of establishing a bridgehead across Basantar river in Shakargarh sector. For accomplishment of the mission, the enemy locality named Jarpal had to be captured first. Major Hoshiar Singh, who was commanding the left forward company, was ordered to attack and capture Jarpal, which was well fortified and held in strength by the enemy. During the assault, his company came under intense artillery shelling and effective crossfire from the enemy medium machine guns. Undeterred, Major Hoshiar Singh led the charge and captured the objective after a fierce hand-to-hand fight.

The enemy reacted sharply and put in three successive counter-attacks supported by armour on December 16. Major Hoshiar Singh, unmindful of heavy shelling and tank fire, went from trench to trench motivating his men and encouraging them to remain steadfast and fight. Inspired by his dauntless leadership, his company repulsed all counter-attacks, inflicting heavy casualties on the enemy. Again, on December 17, the enemy launched another massive counter-attack with a battalion supported by medium artillery fire. Though seriously wounded, Major Hoshiar Singh, with total disregard to personal safety, continued to inspire his men by going from platoon to platoon even under intense artillery shelling.

When an enemy artillery shell landed near the machine gun post seriously injuring the crew and rendering the machine gun inoperative, Major Hoshiar Singh, realising the importance of machine gun fire, immediately rushed to the machine gun pit and though seriously wounded, manned the gun inflicting heavy casualties onto the enemy. The counter-attack was repulsed yet again and the enemy retreated, leaving behind 85 dead, including Lieutenant Colonel Akram Raja, their commanding officer, and three other officers. Major Hoshiar Singh, though seriously wounded, remained with his Charlie company and refused to be evacuated till the ceasefire.

From the Battle of Basantar emerged not just one but two Param Virs; on one flank of Jarpal, while Major Hoshiar Singh was beating back infantry counter-attacks one after another, on the other, a young subaltern, Second Lieutenant Arun Khetrapal of Poona Horse, took on the enemy armour within 200 yards and knocked down the enemy tanks one after another till his own tank was hit and the fearless boy from Poona Horse went down with his tank named ‘Famagusta’, posthumously earning the topmost honour for his regiment.

After the war, the Indian Army did well to post Major Hoshiar Singh, PVC, to the Indian Military Academy as company commander, Sinhgarh Company, where he proved to be a tremendous inspiration for the cadets and turned the company into the champion company for much of his tenure there. Later, as Colonel, he commanded 3 Grenadiers, his own battalion, with distinction.

After 35 glorious years in olive greens, the Param Vir from 3 Grenadiers retired in 1988. He made Jaipur his second home but frequently spent time in his village Sisana and motivated the young generation to continue to follow the good old Haryanvi tradition of being part of the defence services.

After a brief illness, Col Hoshiar Singh, PVC, breathed his last on December 6, 1998. The ace volleyballer Hoshiare of 2nd Jat and the fearless Hoshiar Singh of 3rd Grenadiers had been an epitome of regimental spirit. All his three sons consciously attempted to follow in his footsteps. Two made the grade and were commissioned into Grenadiers. One even availed the parental claim and served in 3 Grenadiers, his father’s battalion, the PVC Battalion.

Col Hoshiar Singh, PVC, undoubtedly, is a shining jewel in 3rd Grenadiers’ crown but old-timers from 2nd Jat Battalion too claim him as theirs, and rightly so; they fondly refer to him as “Mhara Hoshiare”.

Established: A draft royal warrant was prepared in October 1948 for the institution of Param Vir Chakra in the name of the British sovereign as, during the dominion period, such a step would have been necessary to give the award status within the Commonwealth. On further consideration, this course was abandoned and the medal was created and was instituted by the President of India on January 26, 1950, with the award effective from August 15, 1947.

Eligiblility: Officers, men and women of all ranks of the Indian military, paramilitary and members of the nursing services of the Armed Forces.

Awarded for: The most conspicuous act of bravery, or some daring or pre-eminent act of valour or self-sacrifice in the face of the enemy on land, at sea or in the air. The decoration may also be awarded posthumously.

The award of the decoration carries with it the right to use PVC as a post-nominal abbreviation. Provision has also been made for the award of a Bar for second (or subsequent) award of the PVC.

(now Honorary Lieutenant) Yogender Singh Yadav, the living legend. He was just 19 years and two months old when he displayed the stuff he was made of during the Kargil war in 1999.

and one from the Air Force. However, no PVC awardee has so far won the award the second time.