Airports in region: Way short of expectations : The Tribune India

A commercial flight hasn’t landed in Shimla since March last year. A Delhi to Kullu (Bhuntar) flight can cost Rs20,000 at times. Gaggal in Dharamsala, too, has limited connectivity. Himachal has cut VAT on aviation fuel to 2% from 25%, but it will take much more for air travel to take off 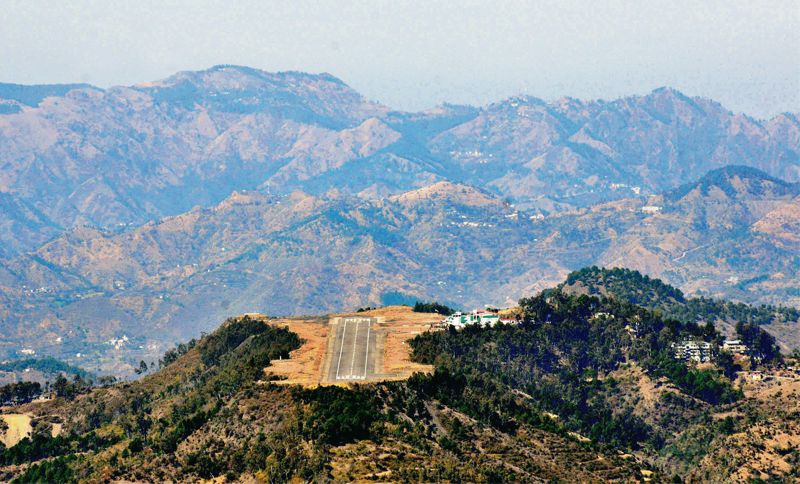 Jubbarhatti airport 23 km from Shimla | No commercial flights since March 2020 | Shimla-Delhi fare could touch around Rs20,000 when an ATR-42 was landing here

HE’S had a ringside view of the tourism industry’s expansion over the past three decades, but Dinesh Sood, who owns a travel agency in Shimla, still can’t wrap his head around the erratic and poor air connectivity to Himachal Pradesh. “There has been talk of extension of runways for as long as I can remember, with no progress whatsoever. How long can you deny tourists and locals air travel that is regular, reliable and economically viable? Why not set up a centrally-located airport in the state with a longer runway?” he asks.

All three airports in the state — Bhuntar in Kullu, Gaggal in Kangra and Jubbarhatti near Shimla — have short runways owing to geographical constraints, requiring limited passenger capacity (load penalty), especially during take-off. This, in turn, results in the fare shooting up sharply. Very often, one-way tickets for the Shimla-Delhi and Kullu-Delhi flights can touch Rs20,000 and above.

There have been no commercial flights at the Jubbarhatti airport since March last year. Connectivity to Bhuntar and Gaggal, too, was severely affected during the pandemic, but is limping back to normal.

Chief Secretary Ram Subhag Singh, while agreeing that short runways is the biggest hurdle, says the fact that none of the airlines has smaller aircraft adds to the problem. “We have taken up the matter with the Civil Aviation Ministry about leasing out ATR-42-600 aircraft, which can operate with improved load capacity. The Minister had asked us to reduce the 25 per cent VAT on aviation turbine fuel, which we have cut to 2 per cent. So we hope to get planes that are better suited for our shorter runways.”

Kullu hotelier Budhi Prakash Thakur concurs that non-availability of small planes makes the air travel business unviable in the hill state. Thakur himself had to shut down the charter flights he operated on the Shimla-Chandigarh route for three years during summers. “Our requirement is ATR-42 aircrafts that are designed to cater to short landing and take-off distances. The 25 per cent VAT on turbine fuel also did not help,” he says.

A greenfield airport at Mandi is a dream project of Chief Minister Jai Ram Thakur, but with more than Rs1,000 crore required for land acquisition and construction, it is unlikely to become a reality without financial backing from the Centre.

The option of operating and promoting heli-taxi services from Shimla, Dharamsala and Kullu to Chandigarh and within the state, too, has not been very successful. Pawan Hans operates two-way services from Shimla to Dharamsala, Kullu and Chandigarh with a limited load capacity of 440 kg for an 11-seater helicopter; the 10-kg luggage limitation is a dampener. As is the absence of a helipad close to Shimla. Thakur says one reason why helicopter services from the state capital have not picked up is because one has to travel 23 km to Jubbarhatti (a journey of almost 45 minutes) to take the flight. “The luggage limitation of 10 kg is another factor, and services at times are suspended if there aren’t enough passengers, thus making it unreliable. The fare for a Shimla-Chandigarh trip is Rs3,445, Shimla-Kullu Rs3,828, and Shimla to Dharamsala Rs4,750.”

The Prime Minister had launched the subsidised air travel service under the Centre’s UDAN (‘Ude Desh ka Har Nagrik’) scheme from Shimla on April 27, 2017. The regional connectivity plan projected that tourists could fly to Shimla from New Delhi for just Rs2,000. The reality is that at present, there is no commerical flight to Shimla.

Irregular air connectivity, especially to Shimla, has been the biggest inhibiting factor for high-end tourists, who do not wish to undertake arduous and time-consuming road journeys. Some hoteliers had even offered a minimum seat guarantee to ensure fixed flights to Jubbarhatti, the tabletop airport located 2,196m above sea level, but with little success. At present, the runway dimension of the Shimla airport (1,189m X 30m) is only suitable for a 42-seater plane with load penalty, due to which the incoming Alliance Air flight could have a maximum of 30 passengers and the outgoing one only 15.

According to a study conducted by the Airports Authority of India (AAI) through RITES, the cost of the embankments and earth work for the proposed extension of runway and provision of an isolation bay would work out to be Rs425.59 crore, which excludes the land acquisition cost — all to be borne by the state government. The length of the runway would increase only marginally even after undertaking all these works.

The rate being quoted by landowners for acquisition ranges from Rs50 lakh to Rs1 crore per bigha. In all, 182.19 bighas have to be acquired, including 59.18 bighas of forestland for which permission has to be sought from the Centre.

The progress has been slow and considering the financial implications, the possibility of work being taken up in all earnestness seems bleak.

Set up in 1992, it has the best air connectivity in the state. The fact that it is used by disciples and followers of the Tibetan spiritual leader Dalai Lama to reach McLeodganj makes it a popular circuit, with considerable traffic round the year.

The length of the runway is 1,372m X 30m, which is suitable for landing of a 72-seater aircraft though with load penalty. A bigger aircraft can land here only if the runway is extended. Land measuring 1,849 bighas will have to be acquired by the state government.

Though there is a proposal to extend the runway by 3,010m, the huge bill of Rs500 crore for acquiring 144 hectares has stalled execution of the plan. In case the runway is extended, international flights can land here, giving major impetus to the tourism sector and bringing fares down for domestic flights.

Located 10 km from Kullu and close to 50 km from Manali, the Bhuntar airport’s runway (1,128m with a width of 30.5m) is suitable for landing of a 72-seater aircraft with load penalty. The first commercial flight from Bhuntar, a 16-seater Dakota operated by Indian Airlines, took off in 1959. There were no flights from 1971 to 1976 due to development work. It was in 1982 that flights resumed with former PM Rajiv Gandhi piloting the first flight. Post-Covid, the airport has only one Air India flight (Delhi-Kullu) operating six days a week via Chandigarh and on Sunday, there is a direct flight from Delhi.

An ATR-72 can carry up to 50 passengers when it lands, but during take-off, the capacity is restricted to 25. This results in the one-way fare from Kullu to Delhi crossing Rs20,000. A study by IIT-Roorkee recommends construction of a bridge for the runway to be extended over the Beas, or diversion of the river. The tentative cost of diversion is Rs81.34 crore, besides taking three to four years to stabilise. This would help extend the runway length by 660m. The diversion cost will have to be borne by the state government; there’s been little progress on the project. Diversion would involve acquisition of 343 bighas at over Rs250 crore.