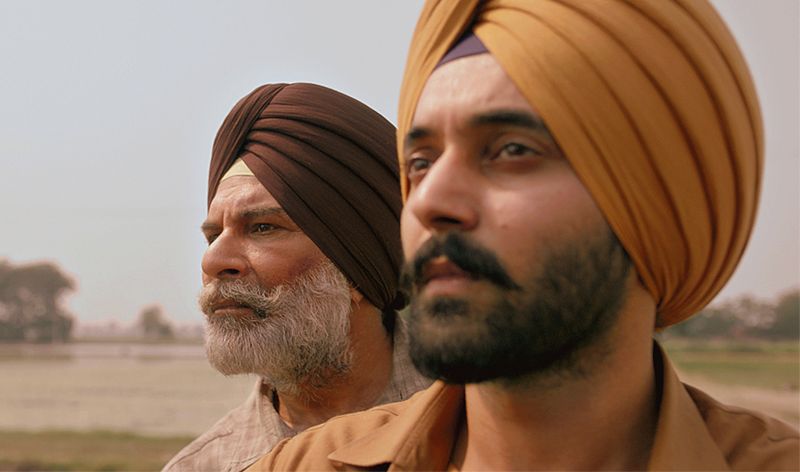 Pavan Malhotra (left) and Paramvir Cheema in a still from web-series Tabbar.

STREAMING on SonyLIV, the web-series ‘Tabbar’ (which means family in Punjabi) is gathering much appreciation for breaking the clichéd persona of loud-mouth Punjabis. A major share of this credit goes to its director Ajitpal Singh (44) and the lead actor Pavan Malhotra, both of whom were surprisingly not the original choices. But then, as Ajitpal says, patience is something he has in abundance. “I wait quietly, preparing for the moment.”

It’s this quality, along with painstaking research and hard work, that has won this self-taught filmmaker many prestigious awards. His debut film ‘Fire in the Mountains’ premiered at the Sundance Film Festival this year in February and won eight awards, including Jury and Audience awards for Best Film and Best Director. It also got him this web-series. “I had read the screenplay, particularly episode one, and I had really liked it. I wanted to be a part of it, to direct it. But someone else was already on board and I was still busy with ‘Fire in the Mountains’ that was yet to go to Sundance,” says Ajitpal.

Sundance has been lucky for this Punjabi, who grew up in Gujarat. When this science graduate decided to be a filmmaker, inspired by ‘The 400 Blows’, a French New Wave drama film, his first screenplay won the Sundance Grant as part of Sundance Screenwriters Lab 2012. The decade-long journey, however, to reach there hasn’t been easy, but the learning along the way has made him master the visual language, which comes across clearly in his other productions as well.

“I don’t like my characters to talk much. I want them to convey emotions through the visual language and not through dialogues. My stories are always simple but told through complex and layered characters.”

Whether it is Omkar and Sargun in ‘Tabbar’ or Chandra and Dharam in ‘Fire in the Mountains’, his characters are multi-layered, adept in the language of emotions that speaks without words. Most of them are also autobiographical. Chandra was based on his cousin’s life and fate, while Omkar has many similarities with his father, a retired Armyman, who tried farming and later running a movie theatre in Bathinda, but couldn’t due to the militancy problem in Punjab. The family had to shift to Ahmedabad where his father, having lost everything, had to start from scratch as a security guard again. “Omkar is a flexible believer just like my father, while Sargun’s unflinching faith comes from my mother. Their on-screen conflict due to this dichotomy has helped my parents understand their problem better,” laughs Ajitpal.

On his not treading Bollywood’s beaten track about Punjabi stereotypes in ‘Tabbar’, which has been shot in Bassi Pathana, near Fatehgarh Sahib, he says, “But most real people from any community are a mix of all kinds of qualities. Having grown up in Gujarat, I have hardly come across a stingy Gujarati; most of them are quite generous. Perhaps, there is not enough time for research in mainstream cinema,” says this writer-director, who started off as a documentary maker and also worked as a researcher with director Rolf Lambert on his German/French documentary films that were shot in India.

On the web series’ similarities with Bollywood blockbuster ‘Drishyam’, Ajitpal says he hasn’t watched it. “During the shoot, some crew members did point this out but only the basic premise seemed the same. I didn’t watch it because then I’d have made a conscious effort to give it a different treatment and that would have affected my honest interpretation of the story, that’s close to my heart,” says the man who’s educated himself on world cinema, as well as Satyajit Ray’s films nearer home.

“I have watched over 50-60 movies from the ‘Sight and Sound’s’ list of world’s 100 best films,” he adds. ‘Pather Panchali’ remains his go-to film, as does ‘Hazaaron Khwaishein Aisi’, with Raj Kapoor, Guru Dutt and Adoor Gopalakrishnan among the filmmakers he likes.

And while he may never be comfortable making a hardcore Bollywood masala movie, he confesses to watching ‘Veer-Zaara’ a number of times.

Will there be a season 2 of ‘Tabbar’? Ajitpal smiles mysteriously, “Let it be the makers’ prerogative to spill the beans on this one.”