Once a hub of Punjabi literature, this book market has gone through ravaging moments, mindless govt decisions 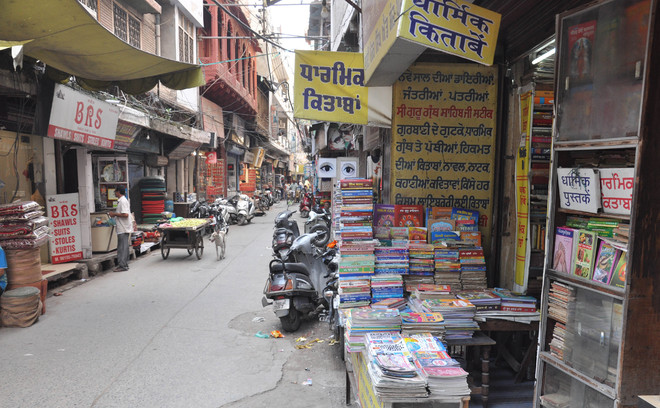 Amritsar’s Bazaar Mai Sewan was once considered the world's largest setting of Punjabi books. But as of now, all glory has been lost in the mists of time.

With 25 publishers abounding the Bazaar Mai Sewan, it was considered once the world’s largest setting of Punjabi (Gurmukhi) books. But as of now, all glory has been lost in the mists of time.

The original area starting from Darshni Deorhi to Chowk Ghanta Ghar, which was more than 200ft, has been reduced. Several historic buildings, including Udasi Akhara, Sangal Wala Akhara, Gianian Wala Bunga and Hathi Khanna dotting the bazaar are all gone.

Meanwhile, a big chunk of the history was demolished by the government for the construction of Galiara around the Golden Temple in 1988. Most of the book sellers and publishers were moved to other markers, while many left the business. Today, you could say the market is totally no-nostalgia-evoking, unrecognisable remnant of its past grandeur. Only shops of drafting materials, hotels and religious symbols can be seen. A scanty of booksellers is the only reminder.

During the much-condemned attack of the Indian Army on Akal Takht in 1984, a number of shops were reduced to ashes. Come 1988, the government’s decision of Galiara at the expense of market left many sellers in turmoil. Many were displaced.

Narinderpal Singh, owner of Mehar Singh and sons, laments: “They didn’t care about its legacy during the Galiara’s construction. The business of books is perfect, but the new generations of the publishers are not adopting it. Religious literature is high in demand. We are sitting at the heart of Sikh world and customers from all over the world visit us. The government ruined our market.”

They didn't care about its legacy during the Galiara's construction. The business of books is perfect, but the new generations of the publishers are not adopting it. Religious literature is in high demand. We are sitting at the heart of the Sikh world and customers from all over the world visit us. The government has ruined our market. —Narinderpal Singh, owner of Mehar Singh and Sons

Gursagar Singh, owner of Singh brothers, recalls: “There was a great time of the market, when it was the hub of the Punjabi literature. The business is good, but owing to scenarios several prominent publishers have switched to other occupation.”

Balwinder Singh, former Head of the Guru Ramdas School of Planning at Guru Nanak Dev University, sai: “I have submitted a thesis for MPhil on Bazaar Mai Sewan to my guide BS Brar. Once, it was world’s largest market of Gurmukhi books. Now, it’s almost ruined; the market witnessed huge changes during the 20th Century.”

Establishment of printing press and publishers

Shrouded in mythical past

The Bazaar Mai Sewan started early in the Ranjit Singh era (1780-1839). It was Maharaja Ranjit Singh, who dedicated this bazaar to a lady named Mai Sewan. She was the wife of a military commander Fateh Singh Kaaliawaala. Mai Sewan was known for her dedicated services at the Durbar Sahib and was one of the most respected figures among the locals. Interestingly, a myth also runs parallel to the belief. It is said that it belongs to Mai Sewan, a devotee of the third Sikh Guru — Amardas ji. Once, she expressed her desire of wanting her name to live forever to the master. The Guru is said to have complied with the demand. When fifth Guru Arjan Dev developed the city and allotted land to the settlers, a bazaar leading to Guru Ke Mehal (residence of Guru) was dedicated to Mai Sewan.