An IITian’s walk by Ganga, from Bengal to Uttarakhand : The Tribune India 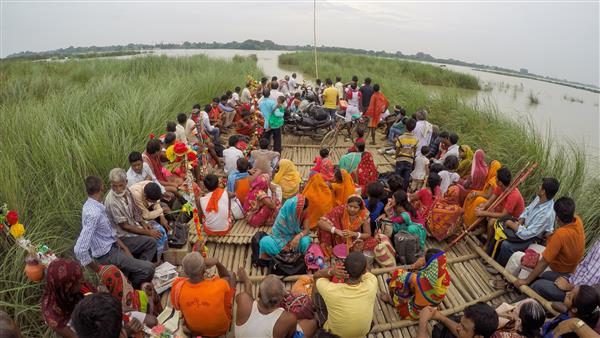 Crossing the Ganga with pilgrims at Sultanganj in Bihar.

“Scope of a river or scope of defining a river is as vast as the river itself. It can’t be contained in one description.” These words from Siddharth Agarwal sum up his 3,000 km walk along Ganga — from the sangam in Bay of Bengal to its source in the Himalayas. And it is much more than just water, he says.

Completed in over 10 months in 2016-17, the walk presented a unique way of knowing the ecosystem. Through assimilation. A documentary, ‘Moving Upstream: Ganga’, brings alive this journey. Siddharth recounts the hiccups, the connections and the learnings when he negotiated the maze of varied landscapes, languages and cultures with Ganga being the constant companion.

The film showcases unheard voices to challenge the dominant narratives around development and living. It brings forth beauty of the river as also the tragedy of the new and old engineering projects. Most of the time the screen is graced with people engaged in farming, catching fish, repairing boats, dancing, walking through the dry floodplain, herding animals, praying...

They are not subjected to an urban gaze that reduces them to dull countrymen. They assert themselves, offer ecological wisdom and divulge their sorrows. These people have seen their houses washed away due to barrages, villages submerged by dams, mountains cut to make way for highways. They are worried about roads damaging forests, bigger vessels pushing out smaller boats, dwindling fish but that doesn’t stop them from offering food and shelter to whoever comes walking.

The 105-minute film talks about issues that don’t get space in the usual news cycle. Those living along the river are witness to its slow shift that takes away their land while acceding territory elsewhere. However, building of the Farakka Barrage to divert water towards Kolkata port has altered the river’s natural course. “Earlier, it would erode soil only during the monsoon but the process now carries on all year around,” says one villager.

In Bihar, people worry how the vessels ferrying consignments under the proposed inland waterways transportation will operate. The project is likely to impact the much-feted Ganga dolphin. In Uttarakhand, the Char Dham Highway project promises quicker pilgrimage by clearing the forests.

Most poignant part of the film is the sequence on workers from Nepal employed on the road projects in the Himalayas. Labouring in another country, unable to negotiate the wages and living conditions, they remain faceless outsiders, except to the walker.

Directed by Shridhar Sudhir, the film is a visual delight. It moves from the vast floodplains of Bengal and Bihar to the ghats of UP and the narrow valleys of the Himalayas — the journey being as much about the inner world of the walker as about the river. When he finally takes a dip at Gangotri, the symphony of action and introspection seems complete. The journey has resonated with others who subsequently took similar walks along Ken and Betwa, the two rivers in news for the proposed interlinking.