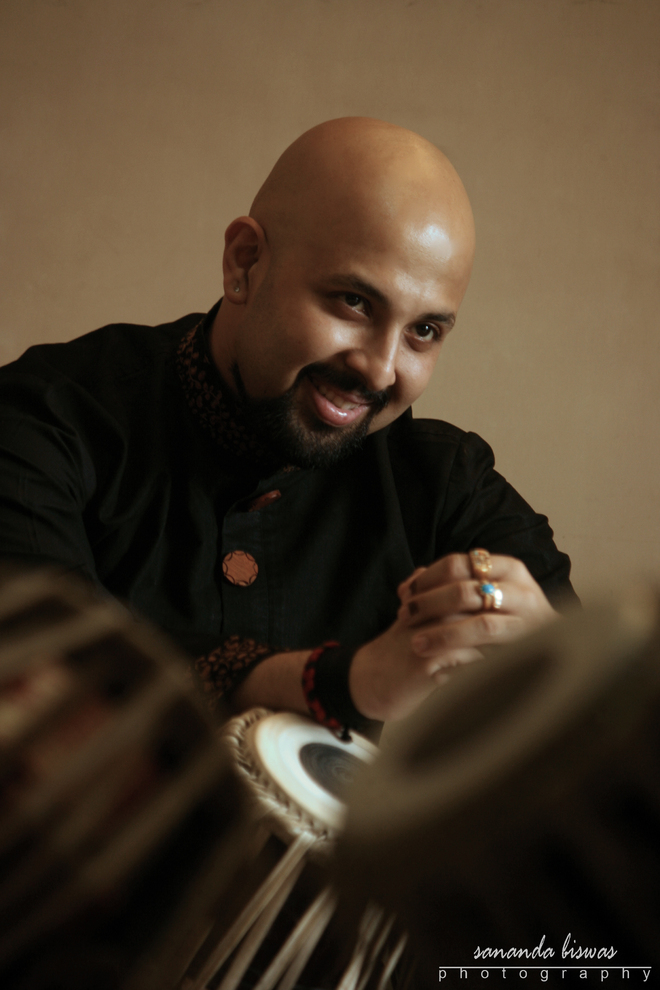 Son of tabla luminary Pt Anindo Chatterjee, Anubrata is one of India’s finest young tabla players. Having inherited the traditional repertoire of various gharanas from his father and his grand guru, the legendary Pandit Gyan Prakash Ghosh, he is upbeat about future projects.

Anubrata feels the audience has significantly changed since Anindoji’s era. “I believe music is just a reflection of society that we live in and is thus ever changing,” he opines.

Bridging the gap between connoisseurs and lay people has been his endeavour even as he presents purely traditional repertoire with immaculate tayyari (technical proves), nikaas (delivery) and laykaari (mathematics) which sweeps the uninitiated off their seats.

Anubrata believes a lay person can be transformed into a connoisseur if he is drawn to the details of Indian music through an appealing performance. He feels too much emphasis is laid on fully understanding classical music to enjoy it. “It is absolutely alright not to understand the details of our art and yet enjoy it. Just like when you visit a movie theatre, you do not have the knowledge of cinematography or filmmaking but have an enriching experience,” he adds.

As the West understands us

Anubrata feels western audiences research any music that appeals to them. “They try to connect to Indian music’s soul and have evolved over the years,” he says.

Recalling a funny anecdote, he says, “In 1975, my father was accompanying legendary sitarist Pandit Nikhil Banerjee at London’s Wigmore hall. The audience misunderstood his appreciating nods to Nikhilji’s aalaap and asked the organisers for a ticket refund. They thought the latter was erring, which my father disapproved of! The audiences have evolved much since then.”

Anubrata’s organisation, Matra, organises regular workshops and shows in India and abroad to spread awareness. Its short-duration concerts, called ‘Beats And Pieces’, present pure classical music to lay people. “Every 15 minutes, there is a new raag, taal, artiste and energy. I have only compromised on the duration and not the musical content,” he insists. Most audiences, he feels, have avoided classical concerts finding them too long and boring.

While he wants ‘Beats and Pieces’ to be a TV show, for now he plans to take it online in the wake of the pandemic which has also put several of his plans on hold. These include The Koto Tabla Project with Japanese Koto maestro Yumi Kurosawa. The two artistes have done over 15 shows in the US and got featured at the National Gallery in Washington DC. They were scheduled to perform 15 more shows this year.

During the lockdown, the artistes suffered immensely, with social distancing hitting the concert scene hard. But Anubrata is neck-deep in online video gigs, classes through Matra, which also offers stage performance tips and traditional repertoire training to young and established tabla players.

Talking about the future, he says he plans to do a biographical documentary on his father, “a living legend”.

His musical mantra is individuality. “Justice would be done to the great ustads only when you infuse your individuality into their repertoire,” citing his father’s example and that of several other masters who have shaped tabla’s traditions.