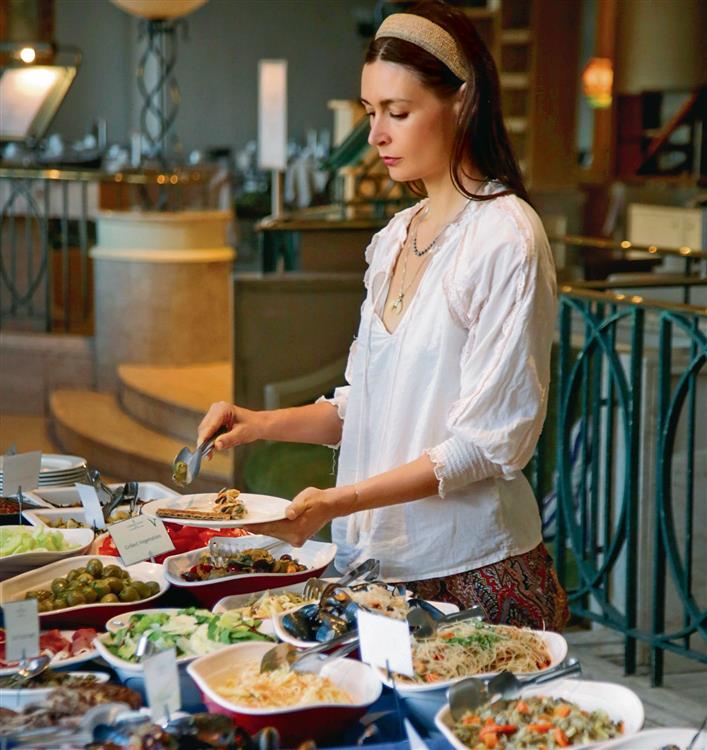 Summer in India can be a torture with the blazing sun skyrocketing mercury to an almost unbearable 50ºC at notorious hotspots. This is the season when, as early 17th century Hindi poet Bihari commented, ‘even shade pines for shade’ (chhahon chahati chhanh) and deer and lion gulp draughts of water from the same fast-drying puddle while the dreaded cobra rests under the shadow cast by its mortal enemy, the peacock. Sanskrit poet Kalidasa, in his lyric poem Ritusamhara, lists things that promise some respite from the heat. Sandal, rays of moon, pools of water and pearls mentioned in these verses have provided inspiration for beautiful baramasa miniature paintings. In Ayurveda, greeshm ritu is the time when nature sucks energy from our body. It is grahan kaal, in contrast to aadan kaal in autumn, winter and spring when the bounties of nature replenish the resources our body has drained out during summer and monsoon. Time to return to heat. Ayurveda makes an interesting distinction between the physical sensation of heat — external (taap) and internal discomfort (daah). Its carefully calibrated prescriptions for the diet to beat the heat include ingredients that have time-tested cooling and rehydrating properties. There was a time when this traditional knowledge had filtered down to the grassroots and women in the kitchen or professional cooks advised by family physicians changed recipes with the cycle of seasons.

Things have changed, and not necessarily for the better. Modern lifestyle has played havoc with our eating habits. For some inexplicable reason, most Indians insist that even at the height of summer, food should be served hot!

On the European table

The world, unlike India, isn’t obsessed with garma-garam khana, even when the sun is scorching. Interestingly, cold cuts are enjoyed in countries with extremely cold climate. The smorgasbord is an integral part of the culinary identity of Scandinavian countries — Sweden, Denmark and Norway. This spread of cured meats, boiled ham and pickled fish is equally relished in Germany and Russia. The ‘cold table’ in Europe is laden with a variety of cheeses, yoghurt, bread and butter. Though largely meaty in composition, it offers many a vegetarian option.

Mezze occupies a significant place in the Mediterranean diet. Though there are a few hot (temperature-wise) dishes, the cold fare offered is mostly vegetarian, with olives, eggplant, cheeses, tomatoes, capsicums and fruits like figs and grapes. Dolma — rice wrapped in vine leaf — is popular in Greece while Turkey takes pride in baba ganoush that bears a striking resemblance to Bihari chokha and dahiwala baigan ka bhartha — both served and enjoyed at room temperature.

Moving on to Spain, we can tickle our palate with a wide array of tapas — bite-sized snacks of flesh, fowl, fish and seafood. Majority are cold to touch. Legend has it that when a king entered a tavern to wet his parched throat with a glass of sweet sherry, a caring bartender covered it with a slice of bread, lest a fruit fly be drawn to it and drown. Tapas incidentally translates as ‘on top’. With passage of time, it became customary to place a savoury nibble on it. The salt in the snack would stoke thirst and encourage the patron to order more drinks. Nowadays, quite a few tapas lovers make a meal of it, moving from one watering hole to another. In Belgium, different kinds of beer are served with complimentary platters of thinly sliced salami and assortment of cheeses.

The subtle sushi is here

In Japan, sushi has evolved as a culinary art form and is arguably the most subtle player in the cold food arena. Glutinous rice provides the layer on which fish or shrimp and eggs are placed before getting wrapped in seaweed. Sushi is served with pickled ginger, pungent wasabi, soy sauce and sake (rice wine). It is a light nutritious option for summers. In the beginning, sushi was only available in niche restaurants catering to expat Japanese in cities where Indo-Japanese joint ventures were operational. Here again many enterprising Indians are making an effort to improvise it for the desi palate. Nowadays, it may be ordered as takeaway in an attractive box in most metros and mini-metros. Still exotic and very expensive but not too difficult to master and manage at home with a little effort and expense. A few of us have the appetite for sashimi — raw thinly sliced prime quality fish — though prawn cocktails are devoured without blinking.

Try out the chilled soups

Leading the pack of new cool kids on the block is gazpacho. This wonderfully refreshing chilled Spanish soup is prepared with capsicum, cucumbers and tomatoes. Close on its heels is the chilled Korean soup with pleasantly pungent radish discs, with or without noodles. Among the popular chocies is bibim nyengmun, Korean cold noodles served with hard-boiled egg and kimchi-fermented shredded cabbage. These recipes have great future as light, well-balanced meal in summer once these are suitably Indianised.

In what is, at times, referred to as the ‘New World,’ there has never been a dearth of cold foods. Mexico has wowed the world with myriad tacos, enchiladas and tortilla-based wraps with tangy salsas. In recent years, Tex-Mex cuisine has made steady inroads into Indian hearts. Fajitas and gazpachos are no longer strangers to us.

Sandwiches to the rescue

Then there are the sandwiches: open and closed, not always toasted or grilled. Many in summer like to have a soup and salad meal at lunch and have a sandwich when feeling peckish. Bombay chutney sandwich, fruit sandwich in Old Delhi and innovations like corn and spinach sandwich/ paneer tikka or jangli tandoori chicken sandwiches have a niche market at Subways where the tikka is relished at room temperature. Story of the birth of sandwich and its many forms from hotdog to hamburger, including delicate finger sandwiches at high tea, makes for a fascinating narrative. Even a brief peep into that scrumptious array would be a digression. Suffice it to note that the popularity of Indian avatar of sandwiches like pav vada is registering a remarkable rise in distant lands.

Before we part company, dear readers, we would like to share with you something that has intrigued us for long. Why has cold cuisine not developed on the subcontinent? Is it the weather in which cooked meats and vegetables spoil fast and become life-threatening health hazards? Or is it that uncooked food was supposed to be unclean ritually and potentially polluting?

To be fair, it must be conceded that there are many regions in India that have delightful cold foods for summer. Our all-time favourite is pakaal from Odisha that is called panther bhaat in Bengal and Assam. Cooked rice is kept aside in a pan with water overnight to allow it to ferment lightly. It is served for lunch the next day with accompaniments as frugal as a slice of pickle to an elaborate multi-textured and chromatic ensemble of bhaja (both vegetarian and non), bhorta, bodi and papad — all served at pleasant enough, cold-to-touch temperature. After splurging on lavish cold lunch, all you can do is have a long restorative siesta. Once considered the poor man’s repast, pakaal has been adopted as summer delight by the elites. Talking of fermented foods, in Gujarat, dhokla, locha and khandavi are not consumed hot and are an integral part of nashto-farshan relished in the course of main meal. In Maharashtra, puri is paired with shrikhand or amras at room temperature. In the countryside in Deccan, thecha (pounded chutney made with amla, garlic, onions and chillies — akin to salsa) is enough to form a complete meal when served with jowar ki roti or multigrain thali peeth. Different varieties of rice — lemon rice, tomato rice and curd rice — are packed in banana leaf to be handed out as nutritious packet meals that peasants carry with them to fields and others to their place of work. In Awadh, dhuli urad ki khilwaar daal and sikore wali masoor daal are served cold, and in Bihar and eastern districts of Uttar Pradesh, chokha is greatly relished cold as is the sattu and dahi chiwada. In the Northeast, fermented fish, soya beans and bamboo shoots add a delightful cold touch to the meal.

We have nothing against foreign cold recipes making way to our table but would love to see our cold repertoire to be eclectic — mixing and matching the indigenous with the exotic. The summer menu should be balanced, giving equal consideration to therapeutic and aesthetic elements. After all, potatoes, tomatoes and many fruits have come to us from distant foreign shores! With little effort, expense and some imagination, you can fortify pachari, kachumbar and upkari to transform these from an accompaniment to main dish. Do experiment and easily beat the heat this summer.