A deep sense of hurt and anguish is sweeping the Lakhimpur Kheri belt of Uttar Pradesh’s Terai region days after eight people died in brutal violence, five of them allegedly mowed down by vehicles belonging to Union Minister of State for Home Ajay Kumar Mishra and his aides.

The unprecedented nature of the crime — use of SUVs to silence protesters — has shocked locals, lending the ongoing farmers’ agitation a huge fillip in terms of cross-community support and rage. The larger refrain is that if this can happen to some today, it can happen to others tomorrow. 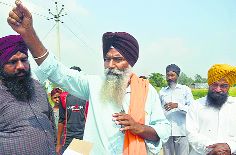 Random people in the area where BJP MP Ajay Mishra’s writ runs large are now questioning, even if in undertones, whether protesting is a crime and whether there are limits to political arrogance and egos.

Days before the killings that left four Sikh farmers and four non-Sikhs dead, Mishra had, in a public meeting, proclaimed in respect of the ongoing farmers’ protests, “Aise logon se kehnaa chahtaa hoon, sudhar jao nahi to saamna karo aake… hum aapko sudhaar denge, do minute bhi nagi lagenge (I want to tell these protesters they should either mend their ways or face me. I will mend their ways. I won’t take even two minutes).”

“He was true to his word. It did not take more than a few minutes to kill people,” says Gurmeet Singh Randhawa of Kheri Sikh Sangathan, who was part of the protest that turned bloody on October 3. Randhawa says three farmers died on the spot and two people in the hospital later, after vehicles belonging to Mishra rammed into protesters who were returning home.

“We protested peacefully in a local playground until 3 pm that day. Deputy CM Keshav Prasad Maurya was to attend the ‘dangal’ Ajay Mishra had organised at Banbirpur village. Maurya’s helicopter was to land at the spot but he was forced to change his route. Having made our point, we told the Lakhimpur administration that we would return home peacefully. Both sides agreed to the route farmers would take to walk back. Minutes later, three SUVs rammed into unsuspecting protesters along the same Tikonia-Banbirpur road. Someone in the administration has a lot to answer for,” Randhawa says, claiming a planned conspiracy to “teach farmers a lesson”.

This Friday, local police confirmed the ownership of two SUVs: Thar Mahindra leading the convoy that hit protesters belongs to Ajay Mishra, the Fortuner that was behind belongs to Ankit Das, learnt to be close to Mishra. A Scorpio was driven away.

Thar Mahindra and Fortuner are still lying burnt along the Tikonia-Banbirpur road, testimony to the retaliatory violence the protesters unleashed, allegedly beating three people to death.

Counter FIRs now await action, one against Ajay Mishra and son Ashish, alleged to have escaped from Thar while firing shots, and the other by the family of the vehicle’s driver Hari Om, allegedly lynched by protesters. Videos supporting the claims of both sides have gone viral, with communities across the board demanding justice.

“This is not about Sikh farmers alone. All communities are calling for justice. The incident goes to show that democracy in the area is at its last legs. The state would be naïve to ignore the anger that is simmering; 70 per cent of India are farmers,” says Dhani Ram Maurya, a retired Chief Engineer from the Kanpur division.

Ground investigations reveal that farmers who had gathered to protest at Tikonia on October 3 were predominantly Sikhs, but not all were Sikhs. Pawan Kashyap, the brother of journalist Raman Kashyap, one of the five who died after allegedly being run over by the SUVs, says there were protesters from other communities as well.

“My brother had specially gone to cover the agitation. We are also a farming family. We have concerns too. It is most unfortunate that farmers are now being labelled as Khalistanis. We deserve justice, not some General Dyer type action we received on October 3,” says Pawan.

“Whoever was there should be punished,” says Ram Dulare Kashyap, the deceased’s father, ahead of the October 12 memorial service that local Sikh congregations have scheduled for the four dead farmers and Raman Kashyap.

The congregation, expecting thousands of attendees from UP, Punjab, Uttarakhand, Rajasthan, Bihar, Madhya Pradesh, West Bengal and Maharashtra, will serve as a massive mobilisation platform for the farmers’ movement, already over 10 months old.

“The more the sacrifices, the greater the strength of the movement. No sacrifice will go in vain,” says Saheb Singh, a local Sikh farmer who was part of the protest that day.

The October 12 ‘antim ardas’ planned at the same Kheri ground where farmers had gathered on October 3 is expected to see the presence of top farm union leaders Rakesh Tikait, Darshan Pal and Balbir Singh Rajewal.

Not a one-off protest

It may surprise many, but the farmers of Lakhimpur Kheri district in central UP have registered the strongest presence in all major farmer agitation related events since these began last year.

Every month on the 19th, groups of local farmers go to Delhi borders to sit in the ongoing dharna against farm laws. They return on the 24th.

“Nighasan registered the highest presence on Delhi borders the day Tikait cried after being removed from the borders. My wife and I go and protest at Delhi borders regularly. We also ran a mobile recharge service on the Delhi border,” says local farmer Karamjit Singh, who resides a kilometre from the spot of the violence.

Lakhimpur Kheri farmers also participated massively in the September Muzaffarnagar mahapanchayat and Bharat Bandh and in agitations across Sitapur and Nighasan belts of the parliamentary segment.

Although there are claims of the October 3 congregation in the area featuring anti-social elements — an angle the UP police say they are probing — the common perception is that all protesters were farmers even though some were wearing T-shirts sporting Jarnail Singh Bhindrawale’s pictures.

“You can’t help what people wear to protests. In any case, there were only very few such people present that day,” says Jarnail Singh, a Lakhimpur farmer, days after Tikait, while reacting to the matter, said, “Bhindrawale was a saint to some people, though he was a terrorist for the state.”

Some latent anxieties do exist with respect to potential infiltration of the farmers’ agitation by unwanted elements. Divisions on the issue are clear between the BJP and non-BJP workers, with the former claiming that Khalistan elements attended the October 3 protests.

“We have lived in harmony with our Sikh farmers for decades. Those who killed my son cannot be farmers. They were outsiders and anti-nationals who executed the crime in a planned way,” says Vijay Mishra, father of Shubham Mishra, 26, among the eight deceased in the violence.

He adds that none among the visiting politicians came to see his family.

“Our crime is that our son was a BJP worker. Was he not a human being? Priyanka Gandhi never contacted us though she said outside that we asked not to see her,” Mishra adds.

Claims and counter-claims apart, the perception gaining ground in the area doesn’t seem to favour Ajay and Ashish Mishra, who have, in the past, faced charges that were never proved.

For the first time in the region’s association with the junior Home Minister, his son joined investigations in the Kheri violence case — a development farmer protesters and leaders are viewing as their singular victory.

Future developments are likely to see a stronger farmer movement with possible impact on UP, Uttarakhand and Punjab elections due in 2022.

In the 2017 Uttar Pradesh elections, the BJP had bagged all eight Assembly segments of the Kheri Lok Sabha constituency, which has a significant Sikh vote of nearly 70,000. The party repeated the performance in the 2019 General Election, with local Sikhs widely believed to have backed it.

Protesters look keen to strike back politically though union leaders have always said their agitation is apolitical. “We may not contest, but we hope our movement will oppose the BJP. We are fed up with the falling procurement prices of paddy, hefty cane dues, rising costs of inputs and farm labour, animals destroying our fields and the farm laws,” says Babbaljit Singh, a farmer protester and a close friend of Lovepreet Singh, 19, who died on October 3.

With farmer sentiments hurt, the BJP may need to revisit electoral calculations. It may find it hard to sack Mishra, fearing the alienation of the dominant Brahmin base in UP, but can it afford to alienate the farmers?