‘Sant Sipahi’ Brigadier Sant Singh, twice Maha Vir Chakra awardee, retired in 1973 after a glorious military career. He remained associated with the War Decorated of India Trust till he breathed his last in 2015 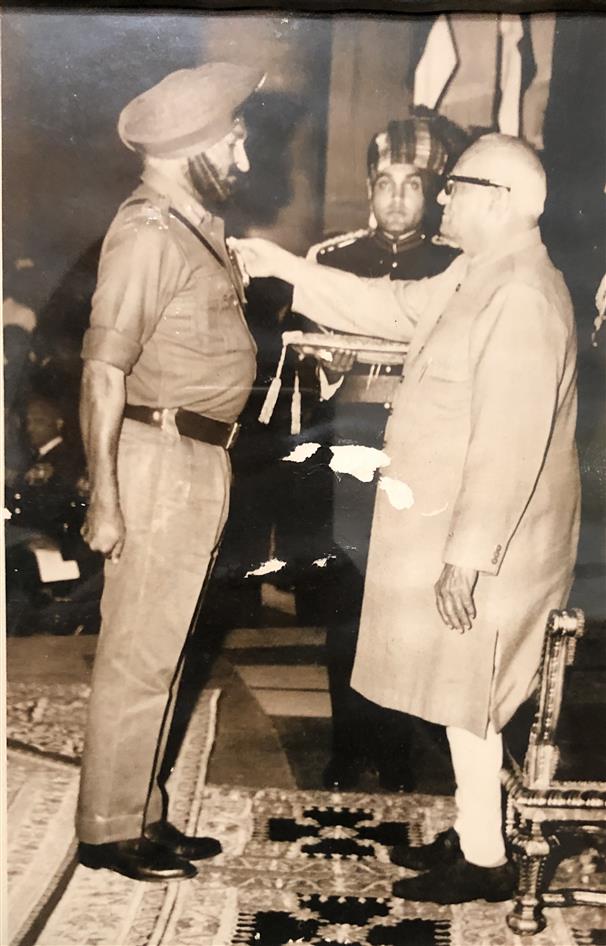 The Bar to MVC from President VV Giri after the 1971 war.

During the 14-day lightning campaign (it actually was 15 and a half on ground on all three fronts) between India and Pakistan in December 1971, among 513 bravehearts who went beyond the call of duty and earned the gallantry decoration, 11 were Brigadier-rank officers — seven fighting on the eastern, two on the western and two on the northern front. Two earned Bar to the Maha Vir Chakra (MVC), the award won the second time. Brigadier Sant Singh earned the first MVC during the 1965 India-Pakistan war. He dared again during Operation ‘Cactus Lily’ in 1971 and earned the Bar to his MVC.

Brig Sant Singh is affectionately known as ‘Sant Sipahi’, the ‘Saint Soldier’. Son of AS Gill, Sant was born on July 12, 1921. He belonged to a marginal Jat Sikh farming family in Panjgrain Kalan in the princely state of Faridkot. After Intermediate from RSD College, Faridkot, Sant was enlisted in July 1941 as a clerk in Faridkot State Forces Engineer Field Company when World War II was on.

Noticing his aptitude as a leader, Sant was recommended by his British Commanding Officer for an Officer’s Commission. After six years in the ranks, on February 16, 1947, Sant was commissioned into 1st Battalion of the 14th Punjab Regiment as Emergency Commissioned Officer. During Partition, the regiment was allotted to Pakistan and Second Lieutenant Sant Singh was transferred to 2nd Sikh Light Infantry Battalion.

During the Junagarh operation in November 1947, Second Lieutenant Sant Singh, as Intelligence Officer of the battalion, at personal risk, provided vital information about the moves of the Junagarh forces that resulted in an almost bloodless takeover, and smooth amalgamation of Junagarh into the Indian dominion.

Sant Singh, now Lieutenant Colonel, went on to command the 5th Sikh Light Infantry from 1964-68. It was during his command that in 1965, against all possible odds, the battalion captured the most formidable, all-defying and heavily defended Chuh-i-Nar feature on Balnoi Ridge in the morning hours of November 3, 1965.

Chuh-i-Nar, the most dominating feature, is located south-west of the Mendaha-Balnoi road in the Poonch sector. It was used as a border post by the Indian troops till 1956. Thereafter, it remained unoccupied. On August 10, 1965, it was discovered that the Pakistanis had not only occupied but also developed it into a strongly-defended area. An attempt was made to get the post vacated through the good offices of the UN observers as the ceasefire was in force since September 22.

The feature dominated the LoC between Bhimber Gali, Mendhar and Balnoi and its occupation by the Pakistan army would result in total isolation of Balnoi from Mendhar and Krishna Ghati. Therefore, Chuh-i-Nar had to be captured at any cost. Since this would be a major ceasefire violation, there was the risk of restarting the war. But seeing the importance of the feature, the recourse to war was considered acceptable.

Attempts by earlier two battalions of Poonch-based 93 Brigade to dislodge the enemy from Chuh-i-Nar had not succeeded. The attacks and counter-attacks, partial successes and failures commenced in early October 1965 and continued for over a month, with the casualties mounting and no end result. Finally, in the first week of November, the seemingly impossible task of capturing Chuh-i-Nar was handed down to 5th Sikh Light Infantry.

On November 2, on receiving the 10th Guru’s holy verse “Nischay Kar Apni Jeet Karoon” from Lieutenant General Harbaksh Singh, the Army Commander, the battalion commenced advance to the Forming Up Place (FUP) with its Commanding Officer, Lt Col Sant Singh, in the lead.

And under the dynamic leadership of their CO, famous for leading the battalion always from the front during attacks, the Panjvin (5th) did what the Sikh Light Infantry is known for: ‘fateh’ at any cost. The Indian post on the Balnoi Ridge, occupied by Pakistanis and named Chuh-i-Nar, was recaptured by 5 Sikh Light Infantry and the post (feature) named ‘OP Hill’.

For the outstanding gallantry of its officers and men, 5 Sikh Light Infantry earned two Maha Vir Chakras (including Sant Singh, the CO), one Vir Chakra and four Sena Medals.

The battle account of the conspicuous gallantry of Lt Col Sant Singh reads:

“On the night of the 2/3 November 1965, Lieutenant Colonel Sant Singh, Commanding Officer of 5th Sikh Light Infantry, was given the task of clearing an objective which, notwithstanding the ceasefire, had been encroached upon by the Pakistani forces. This was a difficult feature and strongly defended by the enemy. Despite enemy mines, machine gun fire and intense artillery shelling, Lieutenant Colonel Sant Singh pressed home the assault.

Lieutenant Colonel Sant Singh removed his patka from under his pugree, tied it tightly on the wound, got up with the help of his radio operator and with manageable quick paces forward joined the assault. And after half an hour of close quarter battle, including hand-to-hand fighting, the enemy withdrew, leaving behind its dead and wounded.

Taking advantage of the captured position, and also to exploit the success, Lieutenant Colonel Sant Singh quickly organised a Company strength of his men and led an assault onto the adjacent objective which also had been encroached upon by the Pakistani forces. Despite continuing automatic fire and artillery shelling, the men dashed forward, dragged the enemy out from bunker-to-bunker and cleared the subsidiary objective as well.

After its recapture, OP Hill has been strongly held by a Company of an Infantry battalion deployed on Mendhar-Balnoi ridge with a mountain artillery battery deployed permanently 3,500 yards south-east of it. The writer was the Battery Commander of the above gun battery from 1988 to 1991.

“During the 1971 India-Pakistan war, Brigadier Sant Singh, MVC, while commanding a sector on the eastern front, achieved spectacular results with a mixed force, having one regular battalion, advancing 38 miles almost on foot, to secure Mymensingh and Madhopur in eight days. During the advance, in spite of very stiff opposition from the enemy, he cleared heavily defended positions at several places. Throughout these actions, Brigadier Sant Singh, MVC, personally led and directed the troops, often exposing himself to enemy MMG fire and artillery shelling. His personal gallantry, leadership, skillful handling of meager resources, audacity, improvisation and maximum use of local resources were responsible for the successful and rapid advance against the much stronger enemy in well prepared defensive positions.

Throughout, Brigadier Sant Singh, MVC, displayed conspicuous gallantry and inspiring leadership in keeping with the highest traditions of the Army.”

Sant Sipahi Brigadier Sant Singh, twice Maha Vir Chakra awardee, retired from the Army in 1973 after a glorious military career spanning more than three decades. The highly decorated Brigadier remained associated with the War Decorated of India Trust till he breathed his last on December 9, 2015.