Cats can really surprise, but never as much as when they wield the brush and colour the canvas 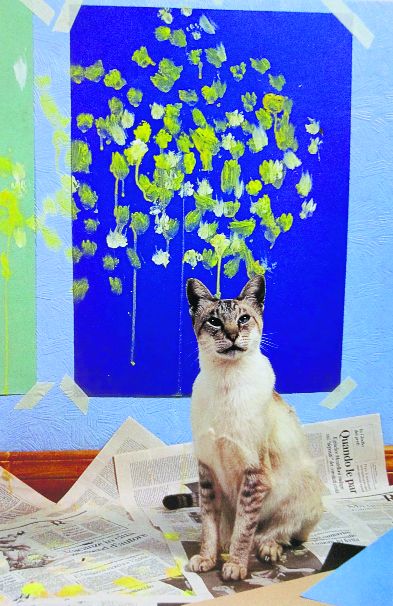 Wong Wong, the cat, posing in front of her work

The Oriental cat: there are of course those snub-nosed, silk-haired Persians, the elegant Siamese, the golden-hued Abyssinians, the chocolate-coloured Burmese; but am I going to write about them? No. I am going to wander through the poetry and the mystery of the Oriental cat that folklore and literature is so rich in: not only in ancient Egypt where the cat was worshipped once, but the long centuries through which this creature has been loved and admired…

Cats, as with all animals and certainly the so-called higher animals, also communicate with more than mew and grrr and hissss. We know they do (other things).

Even in my small circle, I am not known to be a cat-lover: I need to, therefore, retrace my steps back in time, perhaps, to explain where it all began, this idea of doing a short piece on cats and what they do. Ursula Dohrn, and her wonderful mother, Lucy, used to be warm friends of ours in Zurich, and each time I went across to Ursula, I was greeted not only by her but also by her numerous cats. They were there, everywhere, grey and black and speckled: nestling between her feet, purring and nuzzling, clambering on to her shoulder, stretching full length on the carpet, on their backs, slinking away and then coming back at leisure. I was spared the physical attention but the discomfort on my face must have been visible for Ursula to say to me, a bit laughingly, on one occasion: “You are an art historian, Brijinder; no? Just look at others, your peers. Stella Kramrisch lives surrounded by her cats; and of course, Annemarie Schimmel, whom you saw just the other day in Bonn, you told us. They all love cats.” Art historians are meant to love cats, she concluded. I remained unconvinced, however, despite hearing those iconic names, both considerably senior in age and status. But then, as if to close the argument, she followed this up by sending me a book by Professor Schimmel: “The Oriental Cat, Mysticism and Poetry”, written in German, to which I have some access, and in its umpteenth edition.

I viewed the book with respect, and read large parts of it, but went no further. Many years later, however, the cats returned. In Los Angeles, on a lazy Sunday afternoon, my host took me to two sales of de-accessioned books put up by major libraries in the neighbourhood. There they were, table after table laid out with de-accessioned books, added to by donor book-lovers, all selling for pennies, as it were. I spent hours browsing, picking, buying. But what I was stuck by was the number of books on cats that there were. Titles like “A Cat is Watching”; “Tonya and Peach”; “Shasta and J.B. White”; “Mabel and Grouch” (all names of cats); “Collected Correspondence of Cats in Love”; “Why Cats Paint: A Theory of Feline Aesthetics”. Whimsicality and observation written all over these books, but also love. Out of those burgeoning groups, I picked one: the last named. And it is to that book, and what it says, that I return in this short piece.

The book contains a range of serious statements when it presents different cats: each with a name and the style he/she prefers or paints in. Thus, there is Smokey, who is described as a ‘Romantic Ruralist’; Pepper, a ‘Portrait Painter’; Misty, a ‘Formal Expansionist’; Charlie, the ‘Peripheral Realist’. Each cat is quite beautifully photographed, posing as it were in front of his/her work. And it is stated right at the beginning that while it has been known for some time that some domestic cats are able to make marks with paint — the fact is explained by biologists as an instinctive form of territory-marking behaviour — here is ‘a cogently argued theory, based on recent evidence’ that ‘clearly supports the view that some cats’ marks are aesthetically motivated and should be regarded as genuine works of non-primate art’. LA Times thought that the work ‘provides clear interpretation of individual works while avoiding polemics and premature judgments’. That is exactly what one needs — avoiding polemics and premature judgments — approaching this rather arcane subject.

But the book does not shy away from citing ‘doubting-Thomases’ who see all this as entertainment. It even goes into incidents or events where painter-cats were brought in to fool or just provide hilarity to people. The most delightful of these ‘acts’ featured ‘the best-known painting cat’ which was part of the ‘Mrs Broadmores’ show. The account, which goes back to the ’80s of the 19th century, bears telling. The celebrated Barnum and Bailey Circus, travelling in England, featured this item, which was widely, lustily, advertised. There was no ‘Mrs Broadmore’, in fact: a man of big build by the name of James Blackmun, who used to work as a clown, dressed himself up as a female, and did a wicked impersonation of a rather stupid upper-class matron.

‘She’ — this Mrs Broadmore — brought with her a cat, naming her Mattisa and claiming that since she can paint anyone’s portrait, asked the audience who would they like her to paint. Before the audience could respond, however, the cat reached out to the ear of her mistress, as if whispering, and Mrs Broadmore said the cat prefers to paint ‘that lady in the red hat’. The crowd went quiet; the cat dipped her paw in the red paint; and daubed the canvas in front of her with some marks. Mrs Broadmore then pretended to critically examine the portrait and made some remark like ‘she has done a good job, but the nose is too pointed, and the chin is double’. But she also asked the audience to pronounce its judgment.

By now everyone had realised that all this was a practical joke and there were peals of laughter, everyone shouting that the portrait was excellent. It all ended on a jocular note, with Mrs Broadmore offering to sell her ‘portrait’ to the ‘lady in the red hat’ for a couple of shillings.

So, from so much seriousness to this: where does it all leave us? I don’t know. Back to the need for ‘avoiding polemics and premature judgments’?