Creation and strengthening of milk procurement infrastructure and dairy cooperatives under National Dairy Plan Phase I or Mission Milk in villages not covered under Operation Flood has ensured sustainability in India’s self-sufficiency in milk production. As per an independent evaluation of NDP-I by National Council of Applied Economic Research, Mission Milk has also fetched higher incomes for dairy farmers despite the challenges posed by the pandemic. 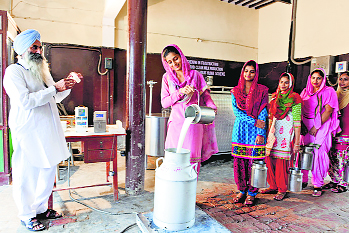 HARINDER KAUR of Yusufpur Darewal village in Jalandhar district has been rearing four milch animals since the past decade or so and she used to sell milk to private vendors. In the past three years, after she became a member of the Jalandhar Milk Union, she has been selling milk to a cooperative, part of the Punjab State Cooperative Milk Producers’ Federation Limited (Milkfed), popularly known as Verka. As part of the expansion of dairy cooperative coverage in areas which were not covered during Operation Flood (1970-96), Kaur and many other women farmers were provided training about rearing animals. Village-level infrastructure was set up for the collection of milk under the National Dairy Plan (NDP-I), a World Bank-assisted project implemented by the National Dairy Development Board (NDDB) from 2011-12 to 2018-19.

Mission Milk was envisaged for meeting the growing demand for milk, estimated at over 200 million tonnes (MT) by 2021-22. A scientifically planned multi-state initiative as launched to increase productivity of existing herds through a focused programme on animal breeding and nutrition. Another critical element of the programme was to create a village-based milk procurement system (VBMPS) through the setting up and strengthening of dairy co-op societies in areas hitherto not covered under the three-phase implementation of Operation Flood.

Kaur says she and her family used to take around 30-35 litres of milk daily to the private vendors located about 15 km away, but now, with the setting up of a dairy cooperative society in her village, she is able to sell the milk in the village itself with price realisation much higher than what she used to get from the private vendors. “For buffalo and cow milk, Verka pays us Rs 50-55 per litre and Rs 34-35 per litre, respectively, depending on the milk solids’ content, while in the case of private vendors, they used to pay Rs 22-25 per litre,” Kaur adds. She says the payment is transferred every fortnight to her bank account, while in the case of private vendors, the payment used to be delayed. In addition, Verka also provides feed and veterinary services.

Tetri Devi, a dairy farmer from Nagjuwa village in Lohardaga district of Jharkhand, has seven cows and supplies 30-35 litres of milk daily to the Jharkhand State Cooperative Milk Producers’ Federation, also known as Medha. Four years ago, she used to own a desi (indigenous) cow; its milk used to be used entirely for consumption by the family consisting of six members. Once Medha dairy created infrastructure for milk procurement in villages, including Nagjuwa, dairy farmers like Tetri Devi have not looked back as milk is now collected twice a day at village dairy societies, which in turn supply it for processing to the Medha dairy.

Thousands of farmers like Harinder Kaur and Tetri Devi have benefited across the country from the creation of dairy infrastructure at the village level, mainly attributed to measures taken under the NDP-I.

The NDP-I, known as Mission Milk, was envisaged for meeting the growing demand for milk, estimated at over 200 million tonnes (MT) by 2021-22. A critical element of the programme was to create a village-based milk procurement system (VBMPS) through the setting up and strengthening of dairy cooperative societies in the areas hitherto not covered under the three-phase implementation of Operation Flood (OF).

Mission Milk provided rural milk producers greater access to the organised milk processing sector in 52,509 villages across 18 states in which dairy cooperative societies were set up and strengthened and 17 lakh additional members were enrolled, of which 45% were women and 67% were smallholders. Under the VBMPS, 4,171 bulk milk coolers (BMCs) were installed, which created about 12 lakh litres per day of additional milk chilling capacity at the village level.

Around 30,000 automated milk collection units (AMCUs) were set up, which ensured a fair and transparent milk collection system. Milk brought by the dairy farmers got tested for its quality, in terms of fat and SNF (solids-not-fat) content, using analysers; the quantity of milk was measured on an electronic weighing scale; and the payment slips were generated and given to the farmers on the spot. The payments linked to the quality of milk, not mere quantity, encouraged the producers to further improve the quality, which brought about efficiency right from procurement to transportation and processing. Market access to villages not covered under OF ensured that surplus milk of producers is collected round the year at remunerative prices. Mission Milk helped the country maintain its self-sufficiency in milk production in the post-OF era.

Under Mission Milk, to ensure the accountability of producer-centric organisations, the grant for AMCUs and BMCs was restricted to 50% and the remaining was contributed by the end implementing agencies. This financing pattern helped in ensuring that these equipment are effectively put to use by these agencies.

The other key intervention under Mission Milk has been training and capacity building of dairy farmers, members of the Management Committee, testers and secretaries of the village-level dairy cooperative societies and the field-level supervisors on various aspects of clean milk production, procurement, testing, cooling and transportation. More than 25 lakh participants attended the training and capacity building programmes under the VBMPS, which immensely helped in improving the depth and spread of operations and also in ensuring the quality of milk right from the villages.

Further, leveraging Information & Communication Technology, several innovative pilot projects were also implemented, such as data loggers to monitor and control the performance of BMCs on a real-time basis and the installation of rooftop solar PV systems to provide clean energy at an affordable cost.

An independent evaluation of Socio-Economic Impact of NDP-I by a leading research body, the National Council of Applied Economic Research (NCAER), has reported that the setting up of milk collection infrastructure at the village level resulted in greater transparency and fairness in milk procurement operations, while the installation of BMCs gave farmers more flexibility in terms of quantity as well as quality of milk. “It has provided rural milk producers access to organised markets, thereby increasing their income,” the NCAER study has said. The proportion of total landless households covered under NDP-I was 25.9% and the proportion of small and marginal farmers was 61.8%.

The study also states that the household incomes registered an increase of more than 68% for the landless labourers, 73% for small and marginal farmers and 77% for medium farmers in the project areas. The study reported a noticeable and sustainable enhancement of the living conditions of households and villages in the post-NDP-I phase.

The evidence suggest that the second phase of NDP (Mission Milk Phase II) will not only strengthen and modernise our unique smallholder dairying system but also increase our share of the organised milk business, especially in the context of Covid-19, which has created huge awareness among consumers about the benefits of hygienically packaged quality milk and milk products.

Along with market access and the creation of milk procurement infrastructure at the village level, NDP-I also extended balanced ration advisory services through local resource persons to 2.14 million milk producers and 2.87 million milch animals in 33,320 villages.

Much of India’s success in augmenting milk production for meeting the growing demand has been attributed to the successful implementation of NDP-I. During Covid-19, cooperatives have shown resilience in procurement and marketing of milk, notwithstanding the challenges.

The author is Chairman, National Dairy Development Board. Views are personal