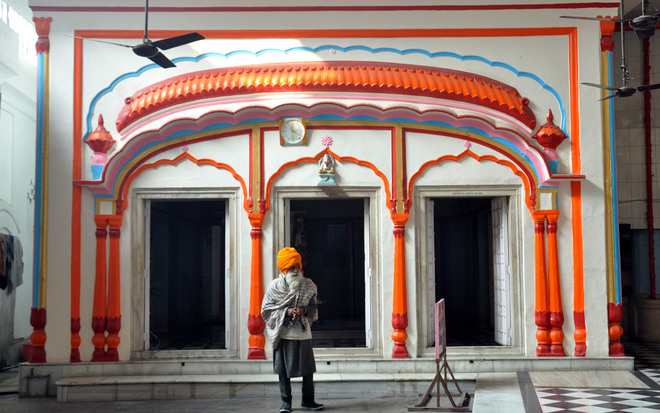 A view of old temple inside Akhara Sanglan wala in Amritsar.

Akhara, a spiritual circle of saints, generally belongs to the Udasi and Nirmala sects of Sikhism and were centres of education and religious activities till the end of 19th century. The word ‘akhara’ is popularly associated with wrestling but in terms of religion, it dons a completely different meaning.

The city has 12 Udasi Akharas, but only a few are now functional. Some of these shifted to Haridwar and Rishikesh after the formation of modern organisations to manage the gurdwara affairs, while some are now sands.

Earlier, Udasi and Nirmala saints associated with these akharas used to manage the Sikh shrines till 1920, the foundation year of the Shiromani Gurdwara Parbandhak Committee (SGPC). The akhara chief gives his seat to unmarried saints only. In modern days, several saints now find any inheritor to run it. So, after the death of mahants, people caught hold of these properties.

Sikh Historian Kahan Singh Nabha mentioned in his ‘Mahan Kosh’ that in the mid 18th century, eminent Udasi saint Mahant Nirvan Pritam Das noticed that saints face inconvenience during their visits at Sikh shrines and gurpurbs. To provide boarding and lodging facility in 1779, Pritam Das established a Panchayti akhara. He also constructed some akharas at Kashi Kankhal (Haridwar) and Hindu pilgrimage sites. Later, Mahants of Nirmala sect also established their akharas for educational and spiritual purposes in the city and other holy cities. However, most of the mahants believe that these were established by Sri Chand, the elder son of Guru Nanak Dev.

It is located on Katra Jallian, on the road heading towards Jallianwala Bagh. Once a prominent akhara, it lies abandoned now. The incumbent mahant resides at Malwa village. The samadhi (tomb) of Mahant Tehal Das is located at the plaza outside the Golden Temple.

It was located near Sultanwind Gate and established by Mahant Narain Das in 1795. The akhara provides lodging facilities for devotees in the holy city.

The original name of the akhara was Parag Das, given after one of the mahants. Due to a balcony over the old building gate, it came to be known as Akhara Shatte Wala. It is located near Chowk Parag Das.

Bala Nand was the successor of Tehal Das. He established a separate akhara in 1775. A great scholar of Sanskrit, Jalle Wale Sardar Albel Singh provided funds to run it. In 1888, akhara head Bishambar Das constructed a three-storey colossal gate, which is mind-boggling enough for the tourists. It also has beautiful frescos on its walls and rooms. The Sikh history is depicted through the paintings by Udasi saints. The akhara had a tradition of teaching Sanskrit, which was alive till 1984. “Later, the universities introduced Sanskrit courses and students don’t visit the akhara anymore,” said a custodian.

The oldest akhara in the city is Akhara Brahm Buta. It’s located on the northern corner of the Golden Temple. The historians believe that Baba Shri Chand stayed here when he visited the city during the regime of fourth Sikh master Guru Ram Das. Nirban Santokh Das was one of the prominent mahants of the akhara during the Misl period that fought against Ahmad Shah Durrani in 1762. The same mahant had constructed Hansli (water channel) to feed the sarovar of Darbar Sahib in 1783. According to the history written inside the akhara, Maharaja Ranjit Singh was born with the blessing of Mahant Santokh Das. Later, the maharaja allotted a large property to them.

It was established by Mahant Balak Nath on the backside of gurdwara Bibbeksar Sahib in Katra Ramgarhia, now known as Kulfi Mohalla. Maharaja Ranjit Singh gave grant for erecting the akhara’s gate in 1825. The huge doorway still exists, but in a rueful state. The mahants have another akhara in Haridwar.

The akhara was founded by Mahant Sharan Das during the Sikh empire. Maharaja Ranjit Singh gifted the land at Tung village. It is still a centre of Udasi sect’s activities.

The akahra was established by Mahant Pritam Das in 1788 in Bazaar Mai Sevan. Two heavy iron chains were installed on the main gate, so devotees named it Sanglan Wala Akhara. It owns good property near the Golden Temple, including the temple of Laungan Wali Devi near Town Hall. Mahant Pritam Das was a well-known Udasi saint, who also constructed a temple inside it. Astonishingly, the old fane is still intact.

Dhuna: Most of the akharas have a hearth, where saints of Udasi sect do sadhna and yagya.

Gerua flag: Gerua (a red ochre) colour flag topped with peacock’s wings can be seen waving at every Udasi dera and akhara.

Frescos and buildings: There was a tradition with Udasi saints to depict the Sikh history and mythology with the wall paintings murals and frescos inside their deras. The deras in city are enriched with the wall painting, though the inner circles of akharas are not open for all due to their spiritual beliefs.

It is located in Bazaar Mai Sevan. It was established by Mahant Ganga Ram Viakarani, an expert of Sanskrit and Gurmukhi grammar. Chiefs of Sikh misls gave him grant to run langar near the Golden Temple. A major tourist attraction, several classic frescos are painted on its walls. At present, Damodar Das is the mahant of the akhara.