Engineering the victory march in 1971 war

Such a rapid offensive in a riverine country — East Pakistan, later Bangladesh — with few roads and antiquated bridges could not have made headway but for the traditional skill of the Sappers in improvisation 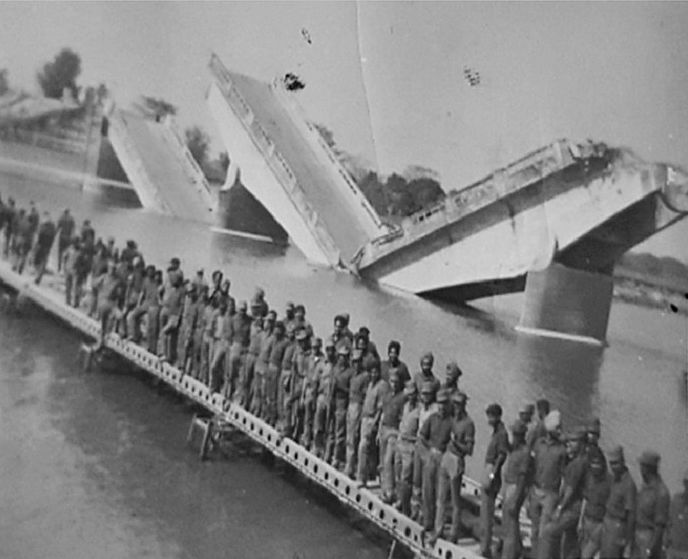 A demolished RCC bridge on the road towards Bogra and the replacement, Causeway Crossing

Commissioned in the Corps of Engineers (Bengal Sappers) in 1968, my first posting was in 235 Engineer Regiment. I had just picked up my Captain’s rank when orders came for the movement of our regiment from Misa, Assam, to Siliguri in October of 1971. We were told to move six train loads of stores (which included bridging, track material and miscellaneous stores) to the Malda railhead. This task was executed under Maj JM Sachdev, SM. In October-end, the regiment moved to assembly area Kamarpara, 12 km short of Hilli.

True to the motto ‘Sada Aage Sab Se Aage’, 235 Engineer Regiment was the first to step into East Pakistan on November 22 to assist 8 Guards in capturing Hilli, even before the war broke out on December 3. It was also among the last ones to leave Bangladesh in April 1972 after restoring full communication from Dinajpur to Dhaka.

The battle of Hilli was among the most ferocious ones fought during the 1971 war.

The 202 Mountain Brigade, of 20 Mountain Division, tasked 8 Guards with capturing Hilli, which was of strategic importance due to its potential of facilitating early capture of Bogra, considered crucial for isolating Pakistani troops deployed in the north from the rest of East Pakistan. Our 75 Field Company, commanded by Maj NS Sohal, provided close support to assist 8 Guards in capturing Hilli. Initially, on arrival at Hilli, they occupied a company defended locality. The attack on Morapara (which was a part of Hilli complex) was launched on November 22-23.

75 Field Company carried out clearing of all minefields, booby traps, IEDs, and improved and strengthened ‘kutcha’ tracks for movement of guns and tanks in the face of intense shelling and direct small arms fire of the enemy. The battle resulted in heavy casualties on both sides. A stalemate occurred and Hilli could be cleared only on December 10.

Thereafter, advance took place towards Ghoraghat, Palasbari, Gaibanda, Rangpur, Dinajpur and Bogra. The aim of 20 Mountain Division was to concentrate at Bogra and provide a joint effort with other formations to capture Dhaka.

East Pakistan had a primitive road network. The three major rivers — Padma (Ganga), Jamuna (Brahmaputra) and Meghna — along with their distributaries made cross-country movement very difficult. The rivers are so wide that at places you cannot see the far bank. Even their distributaries are as wide as 300-400 metres. There were no bridges except Hardinge over Padma and Ashuganj rail bridge over Meghna. All other bridges and ferry-crossing sites were demolished by the Pakistan army or Mukti Bahini.

There was, therefore, huge demand for Engineer troops, bridges and track material to provide quick movement to our advancing columns towards their objectives. This demand was three to four times the normal allotment of Engineer troops. The war in East Pakistan, therefore, became from the outset more or less an ‘Engineers’ War’, with bridges, tracks and Engineer troops as the most pressing requirement.

With each formation, we grouped our Engineer support elements carrying adequate bridging and track material stores to ensure quick mobility of the formations. Three of our officers (Maj Dharawadker, Capt Subhash Verma and Capt KK Paul) placed themselves in the leading tanks or vehicles to ensure clearance of all obstacles and ensure quick movement. The command, control, planning and execution of various tasks were carried out through our Regimental Headquarters. Our Commanding Officer, Lt Col RR Malik, placed himself next to HQ 202 Mountain Brigade so that he was available 24x7 for any advice.

The planning, designing and allotment of resources were being carried out under the supervision of our seasoned 2i/c, Maj VK Anand, in the Regimental Headquarters. In this task, he was assisted by Maj JM Sachdev, Capt Ravi Raichand, Capt TL Joseph and myself.

The motivation and morale could be gauged from the visit of Maj Gen Lehl, GOC of 20 Mountain Division, to the Military Hospital. He was told by one of our wounded soldiers: “Sir, do check how our men were lying dead at Morapara and Hilli. All would be facing the enemy.” Gen Lehl, in his book “Indian Sword Strikes in East Pakistan”, writes: “How right he was. No wonder 8 Guards and supporting troops fought so well.”

Such a rapid offensive in a riverine country with few roads and antiquated bridges could not have made headway but for the traditional skill of the Sappers in improvisation. At the surrender ceremony at Bogra on December 18, our 471 Engineer Brigade Commander, Col M Suri, and our CO, Lt Col Malik, happened to meet the Commanding Officer of 13 Engineer Battalion (Pakistan army). His appreciation spoke volumes: “Sir, I simply admire the way your boys brought the Division virtually on their shoulders over the most indifferent and unexpected approach. We could never imagine that such a large force could ever advance over a route we had ruled out as impossible.”

Another incident comes to mind that highlights the bravery and grit of the men. 76 Field Company was moving with their bridging column when they suddenly came under strafing by the Pakistan Air Force. As per the drill, all the men dispersed to take positions. In this process, an ASC driver stepped on a mine and got his leg blown off. Maj OP Batra, who was the Company Commander, wanted to go and recover the jawan but he was stopped by Capt Amrish Sharma: “Sir, he is from my platoon and I will go get him.” Amrish went inside the minefield and lifted this jawan on his shoulders and brought him on the road.

All communications were managed from Hilli to Ghoraghat, Palasbari, Gaibanda, Rangpur, Saidpur, Dinajpur to Dhaka by lifting mines, booby traps, IEDs and setting up replacement bridges in place of demolished bridges.

On December 11, to clear Hilli complex completely, a minefield had to be cleared in Naopara. Capt Barla volunteered. Some remnants of the enemy were still active. Luckily for him, he found the mine-laying record form in the pocket of the Company Commander of 4 FF, who was deployed at Hilli. This helped him and his team remove all mines and make the area safe though all this time, they were constantly under small arms fire and shelling. They carried out the task without caring for their personal safety. As they were returning after completing their job, a shell landed near them, killing two jawans, and injuring him and four more jawans.

We were very fortunate that the Mukti Bahini acted like our eyes and ears and helped us immensely in various forms. As a sub-sector commander, Capt BD Chattopadhyay trained Mukti Bahini personnel, who carried out many successful missions.

At one of the bridge sites where we were to launch a Bailey bridge, our vehicle carrying the launching gear got stuck and could not reach the site. Launching gear is essential because without this, you cannot launch the bridge. To our surprise, we found a launching gear left by the enemy while retreating as the Pakistan army also uses Bailey bridge equipment which is of World War II vintage.

As they say, the Army marches on its belly; this part of the administration was well looked after by the Headquarter Company Commander, Maj Hukum Chand. In this task, he was assisted by Capt Karam Singh and Capt M Sen.

Never in recent history will you come across a campaign planned so meticulously, resulting in the liberation of a country from the clutches of a ruthless army and surrender of 93,000 highly trained troops in a matter of 14 days.