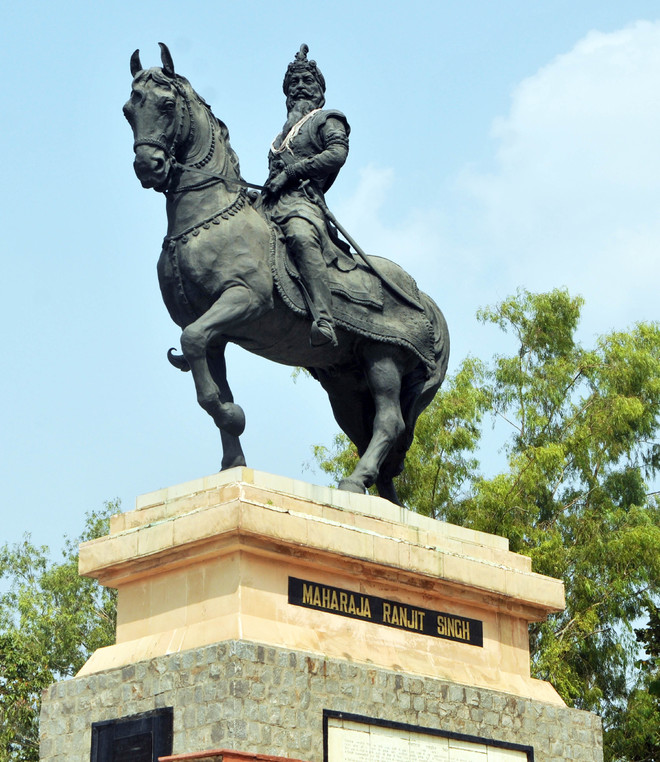 A view of Mahraja Ranjit Singh Statue at Ram bagh garden in Amritsar.

Maharaja Ranjit Singh (1780-1839), popularly known as Sher-e-Punjab or Sarkar, was the first native Punjabi who ruled over the land of five rivers. Because of a rare geo-strategic vision, he ruled from the Sutlej to Kabul Khandhar, Kashmir and Ladakh regions. He had a great association with the holy city. During his stay at Lahore, he often visited the Golden Temple and built a summer palace here for a long stay. The city administration failed to look after the belongings of Great Maharaja and several monuments were crying for attention, but one can feel the greatness of the Maharaja by visiting the Rambagh, where some monuments are preserved. Once the garden was spread over 84 acres, but with concrete roads and large encroachments around, 35-acre area is left open to the public.

The Panorama, a visual depiction of the important stages of the Maharaja was set up in 2006 at a cost of Rs5 crore by the then Chief Minister Parkash Sigh Badal with his personal interest. A two-storeyed circular building features paintings depicting the six major battles of the Mahraja. It is accompanied by a multimedia representation of the sights and sounds of war.

Acquisition of Koh-i-Noor (1814): Right from his childhood, Ranjit Singh had an ambition to acquire the Koh-i-Noor diamond. It was at that time in possession of Shah Shuja, the Durrani monarch, who was later defeated and captured by Ata Md. Khan, the Governor of Kashmir. Ranjit Singh provided asylum to his wife and got Shah Shuja released from Kashmir in lieu of Koh-i-Noor.

Victory at Lahore (1798): At a young age (18 years), Ranjit Singh challenged Afghan invader Shah Zaman, the grandson of Ahmad Shah Abdali, with a handful of soldiers and peasants from Musamman Burj on a foggy early January morning in 1798. With the courage and diplomacy of Ranjit Singh, Shah Zaman was driven out of Punjab in January 1799.

The Capture of Kangra (1809): Gurkhas, considered as outsiders by Ranjit Singh, had captured the Kangra fort in 1806. Ranjit Singh accompanied by some hilly chiefs and their contingent defeated them in a fierce battle at Ganesh Ghati of Kangra Valley. The total defeat took place in September 1809. Use of small khukries by the Gurkhas compared to long swords, guns and canons by the Sikh army, was the reason behind the failure of the Gurkhas.

Victory at Hazro (1813): The fort of Attock traditionally regarded as the sentinel of India on the border with Afghanistan, was recaptured in 1813 from Wazir Fateh Khan and his army marking the liberation of Northern India from Afghans. The battle was won under the overall command of Ranjit Singh with Diwan Mokham Chand in operation accompanied by Hari Singh Nalwa, Mian Gausha and Sardar Dal Singh with a strong Punjabi force.

Summer Palace (1819): The summer palace of the legendary Sikh king was built in 1819. The Maharaja used to stay here during his visit to the Golden Temple. It is located in the Chahar Bagh, a quadrilateral garden on the Mughal pattern. The British ruined the garden. It has been under renovation for the past 13 years, but is still incomplete. It has been out of bounds for tourists for years owing to its prolonged conservation work. Started in 2007, the conservation work is still not over. 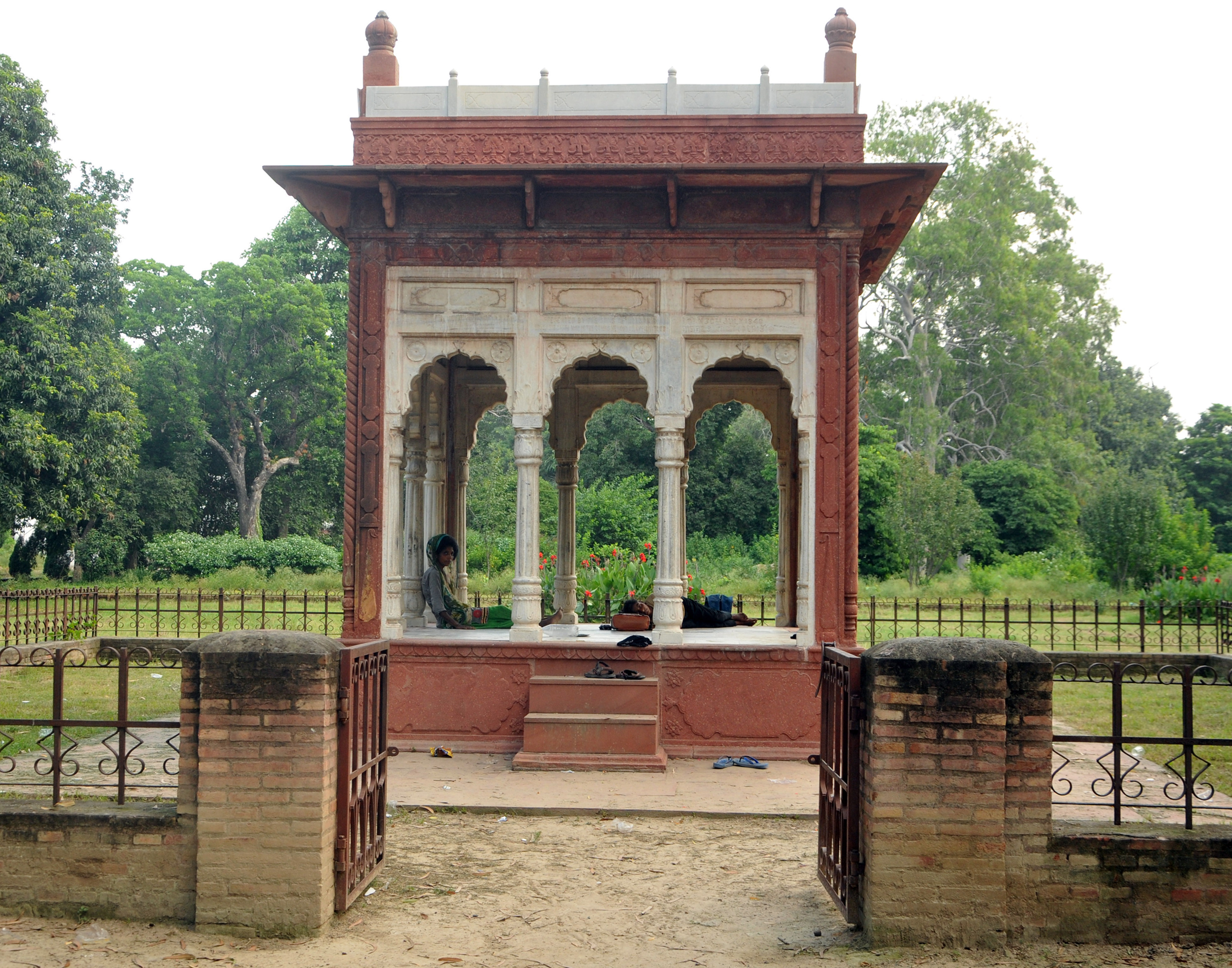 Capture of the Zamzama (1802): The Maharaja acquired the giant cannon ‘Zamzama’ from Mai Sukhan, widow of Bhangi chief, Gulab Singh Bhangi in 1802. Three small cannons were also acquired from them, which are near the giant Zamzama. A big gun — Zamzama — is being hauled up by a good number of Maharaja’s soldiers in front of the Govindgarh Fort of Amritsar.

Ranjit Singh’s marriage (1795): The marriage of Maharaja Ranjit Singh with Mehtab Kaur, granddaughter of Kanhaiya Misl chief, is being solemnised in a large decorated Baradari. The matrimonial alliance became a major event in the history of Punjab.

The Fall of Multan (1818): Ranjit Singh captured the fort of Multan situated between the Sutlej and Ravi in 1818 from Nawab Muzaffar Khan. The 16-year-old Prince Kharak Singh participated as one of the commanders along with Misr Dewan Chand and 20,000 men. The artillery under the command of Illahi Baksh and big Bhangi gun ‘Zamzama’ played a major role in capturing the fort. The conquest of Multan by Maharaja Ranjit Singh ended the Afghan influence in Punjab.

The Ropar Treaty (1831): Maharaja Ranjit Singh, riding an elephant, met William Bentinck, the Governor General of India, at Ropar on the banks of the Sutlej on October 26, 1831. Maharaja is followed by a battery of armed men with artilleries at the far end. A good number of royal canopies and tents of the British camp with senior armed officers can be found on duty. The Maharaja took this opportunity to display the prosperity and power of the kingdom of Lahore.

The Conquest of Kashmir (1819): In a fierce fighting on the plain of Shopian, the Sikh army defeated Zabbar Khan, the Afghan ruler and his army, who later fled to Afghanistan, thus leading to the liberation of Kashmir. Prince Kharak Singh, Misr Diwan Chand, Akali Phula Singh with his Nihang troops participated in the battle. The paradise-like Kashmir came under the possession of Maharaja Ranjit Singh in July 1819.

Modernisation of Army by the maharaja (1830)

Maharaja Ranjit Singh was a great general, who wanted to modernise his army after seeing the superiority of the British troops. He inducted several Europeans to facilitate this. JF Allard and JB Venture, the two French officers, who were inducted by Maharaja Ranjit Singh for modernising his army, had served Napoleon in his campaigns. In the painting, they are seen inspecting an organised infantry on the one side and cavalry on the other. All personnel are in right army outfit. Many of them are carrying long arm guns.

Gold plating service at Darbar Sahib (1830): The Maharaja used to go to Harmandir Sahib on every special occasion, especially Diwali and Baisakhi, and present gifts before prayers and the holy dip. The most important offering was the laying of gold plates on the Golden Temple in 1830. Under the supervision of Ranjit Singh, the work of laying gold on the Darbar Sahib is in progress (in the painting).