Fake works and the real threat they pose : The Tribune India

Fake works and the real threat they pose

Imitation art has been destroying reputations, collectors are being duped, galleries have gone bankrupt 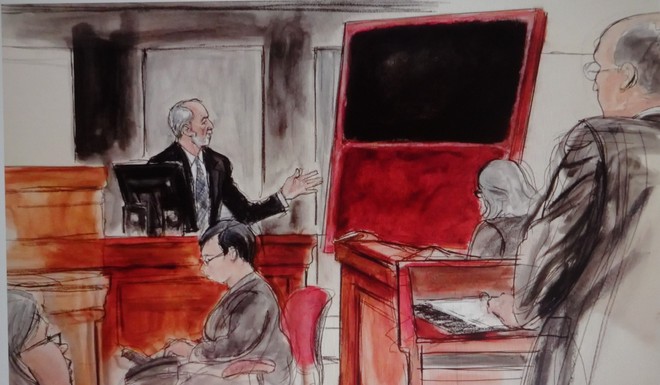 An artist’s impression of a court-room with a trial involving the famous Knoedler Gallery of New York and a forged Mark Rothko painting.

In lockstep, the incentive to be a proficient forger has soared; a single, expertly executed old master (painting) knockoff can finance a long, comfortable retirement. The technologies available to abet the aspiring forger have also improved. Naturally, then, the frauds are getting better, touching off a crisis of authentication for the institutions of the art world: the museums and galleries and auction houses and experts who are expected to know the real thing from its imitation. — The Guardian

Wolfgang Beltracchi is considered one of the most audacious forgers of recent decades. In 2011, he was found guilty by a German court of forgery and corruption relating to 14 fakes that had sold for a total of $45m, sending shockwaves through the art world. Beltracchi has since claimed to have forged around 300 works by artists, including Max Ernst, Max Pechstein, André Derain, and Fernand Léger. — The Art Newspaper

We might pretend otherwise, but, we all know that the world, including, of course, the land we live in, is swarming with fakes: fake claims, fake products, fake news, fake gurus, fake politicians, fake passports, fake degrees, fake guarantees, fake documents, to name just a few. It should come as no surprise, therefore, when someone says that so is the world of art: full of fakes. Just look at the headlines, or reports, in art journals. Not long ago, The Telegraph reported that all works, except one, in a collection of 21 paintings by the great Italian painter, Amedeo Modigliani, which were on exhibition at Genoa’s Palazzo Ducale, were fake. ‘Modigliani is one of the most copied artists in the world and his paintings sell in the millions. Marc Restellini, a French expert on Modigliani believes that there are over 1,000 fake Modigliani paintings in the world. The exhibition closed in July and the paintings were handed over for investigation.’ Again, another newspaper, reporting on a case involving a con-man, John Drewe, who got an art teacher to produce forgeries, wrote: “John Drewe has now begun his six-year sentence for what Scotland Yard has described as ‘the biggest contemporary art fraud of the twentieth century’. Although it may be a slight exaggeration to describe it as the biggest case of the century, Drewe is believed to have sold 200 forgeries of works by modern masters, of which only 60 have been tracked down and the remainder are still in circulation. Among the artists involved are Chagall, Dubuffet, Bissière, De Stael, Le Corbusier, Giacometti, Sutherland and Nicholson.” The art teacher whose talents John Drewe drew upon for forging works was John Myatt, who had once put in an advertisement in Private Eye, offering to paint “genuine fakes” for £150!

These names and these cases come, one realises, from other lands. But ours is no exception, for stories about faking not only works belonging to the tradition — sculptures, paintings, drawings, calligraphies — but also modern and contemporary, are beginning to tumble out in alarming numbers. One is beginning to dread pronouncing judgments or giving opinions. Because the three words that keep emerging from this murky segment of the art world are Fraud, Fake, and Forgery. The question, however, is whether one can distinguish one from the other. On my part, I tried to look for precise definitions and this is what I landed upon in a serious, concerned, article on the question. “What is a Fake?” the question was asked. And the answer: “A fake is a new creation based on an object that already exists. It is, in the words of Theirry Lenain, meant to steal the identity, place, and status of the original it simulates.” And what is a Forgery? “A forgery is another type of deception. It is an exacting new copy of an original, a copy that purports to be the original itself.” Finally, what is a Fraud? The answer: “A fraud is the final piece in the triad. Fraud is a crime in which the perpetrator is charged with seeking to benefit from conveying a fake or forgery.” I am sure legal minds will be able to put this to some use, but, personally, I do not find it too enlightening.

The common man, unconcerned with niceties, is having fun with all this, I am sure. There are galleries which have, for years, been having annual shows of fakes and forgeries, inviting entries for a modest price. It is the 30th year of doing this for a gallery in Newport, for instance. Book after book is turning up, telling you cases of faking and forging and offering advice about how to discern and how not to get caught in this web. A gentleman once held a competition publishing two paintings looking exactly alike, and offering a prize of US dollars 500 to anyone who could, within a given time, tell the original from its copy — a portrait of a girl by Modigliani; in another case the famous Vermeer painting of a Girl with a Pearl Ear-ring. “The odds are terrific: 50-50,” it was announced. “Is it the left one, or the right one? Are you ready? Begin.” And then, after a little while: “Sorry, your time is up. If you selected the one at left, you are wrong. And if you selected the one at right, you are wrong. In fact, they are both fakes.”

With all this going on, fakes have been destroying reputations, collectors are being duped, galleries have gone bankrupt, and panels of experts who authenticate works are being held to ridicule, if not worse. But then, this is only about the world of art: “the curse of museums and the plague of art collectors”. How about all the other fakes that I mentioned at the beginning?