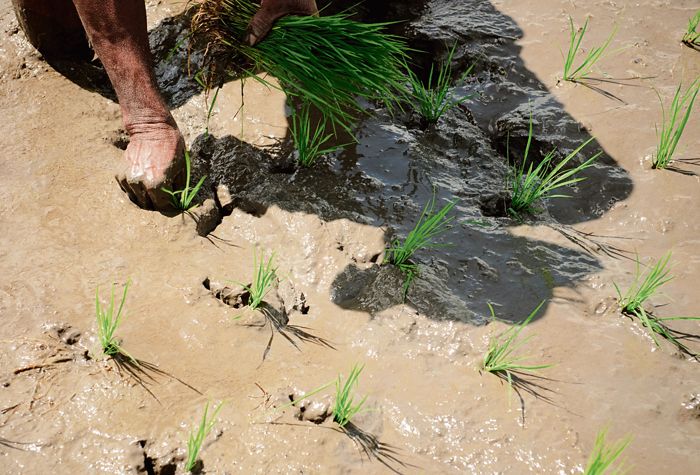 WITH the arrival of monsoon, paddy transplantation has picked up pace across Haryana, a major contributor of paddy to the Central pool and a leading basmati exporter. Farmers are mainly cultivating rice varieties PR 126, 128, 129, 113 and 114, and Pusa 44 in the coarse grain category and PB 1718, PB 1692, PB 1509 and PB 1121 in the basmati group on an average area of around 13 lakh hectares across the state. The productivity (4-5 tonnes per hectare) was higher than the national average of about 2.7 tonnes in 2021, says Virender Singh Lather, former principal scientist, ICAR-IARI, Karnal station.

To minimise the use of groundwater for paddy cultivation, Haryana had enacted the Preservation of Subsoil Water Act-2009, which prohibits transplanting of rice before June 15. Further, the state has also encouraged groundwater-saving rice cultivation practices such as Direct Seeding of Rice (DSR), giving financial incentives to the farmers, Lather adds.

He says the water requirement for DSR crops with early maturing varieties PR-126 and PB 1509 is equivalent to that of maize or other summer kharif crops during a normal monsoon in mid/north-eastern Haryana. DSR crops, if planted between May 25 and June 4, need three irrigations (pre-sowing, at 20 and 28 days after sowing) before the onset of the monsoon and two irrigations in September after the withdrawal of monsoon in comparison to 20-30 irrigations for transplanted rice, which needs standing water.

For dealing with the weed menace, which is the main stumbling block to DSR’s adoption, he recommends advancing the date of sowing to take advantage of climatic factors, instead of chemical treatment.

An official of the Department of Agriculture and Farmers’ Welfare, Haryana, says the department has set a target of DSR on 1 lakh acres of the total paddy area across the state with the aim of conserving water.

An incentive of Rs 4,000 per acre is being given by the state government to the farmers for switching over to DSR from the traditional method. The farmers have to register themselves on the Meri Fasal Mera Byora portal (the last date was June 30).

“So far, the department has achieved nearly 90 per cent target, which is a sign that the farmers are coming forward to save water. The actual situation will be known only after the verification of the crop which is being done by the department,” says Aditya Dabas, Deputy Director, Agriculture, Karnal.

“I have been cultivating paddy with DSR on 100 acres; it results in saving of not only water but also of cost of cultivation,” says Mehtab Kadyan, a progressive farmer of Karnal’s Nagla village.

As per experts, it requires 3,000-4,000 litres of water to produce 1 kg of rice — a major reason for the drastic decline in the water table in the majority of the areas in Haryana in recent decades.

Dip the seed in suitable lots in water contained in a tub/bucket. Stir the seed and remove immature grains which float at the top. The heavy seeds will settle down at the bottom. Eight kg of heavy seed is sufficient for transplanting an acre. Heavy seed ensures healthy, sturdy and uniform seedlings. Treat the seed with Sprint 75 WS (carbendazim+mancozeb) by making slurry of 3-g fungicide formulation in 10-12 ml water for 1 kg seed (24-g fungicide in 80-100 ml water for 8-kg seed) before sowing.