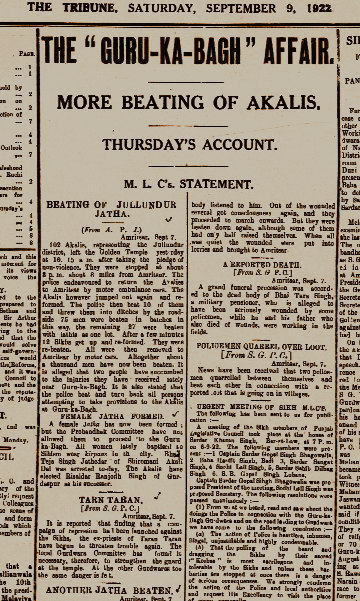 So powerful was journalism during the early 1920s that even the unlettered were forced to learn reading Punjabi. What spurred it was a long list of editors and newspapers, including The Tribune, who were either prosecuted or warned for supporting the Akali movement.

Around 30 new Punjabi newspapers were launched under the influence of the Akali movement between 1920 and 1925.

Producing a newspaper was considered an act of resistance in those days, says Prof Narinder Singh Kapoor, a retired teacher of journalism from Punjabi University, Patiala, and author of Punjabi Patarkari Da Vikas (The Evolution of Punjabi Journalism). “Perhaps it was the only time in the history of Punjabi journalism when newspapers would sell at a premium and even the elderly turned to learning the language. The fearless writing created lakhs of new readers as well as literate men and women.”

How The Tribune reported the Akali resistance

He says though the Akali resistance lasted five years, but those five years gave birth to a new kind of journalism which thrived on the strength of the readers. “Punjabi journalism overcame the narrow religious barriers and started looking at events from a political point of view,” points out Prof Kapoor.

The Akali leadership, Prof Mohinder Singh writes in his seminal work The Akali Movement, was fully alive to the important role of the press in the success of their movement. Akali was such a popular paper at one point of time that its circulation touched 25,000. As per a popular anecdote, all the printing presses in the state together could not meet the demand.

It was also the time when a new trend of hiring ‘dummy’ editors set in. There were over 40 editors who were jailed for writing in support of the Akali resistance. “Heavy penalties were imposed upon these papers and editors were sent to jails. The Tribune, Kesri and Bande Matram were warned for showing sympathy with the Akali movement,” writes Prof Mohinder Singh.

Some of those who were prosecuted included Teja Singh of Gargaj Akali, who was fined Rs5,000; editor of Daler Akali, Amritsar, Rs500; editor, publisher and printer of the Kirpan Bahadur was sentenced to a year-and-a-half in jail and fined Rs150. Jawala Singh, editor of Desh Sewak, was fined Rs150.

From eyewitness accounts to field reports, from editorials to articles, The Tribune extensively covered the movement. “From March 1921 onwards, it gave wide coverage to the Akali movement. Prof Ruchi Ram Sahni, working as a representative of The Tribune (who later served as a Trustee), regularly dispatched long accounts of the happenings,” historian Prof VN Datta notes in The Tribune, 130 Years: A Witness to History.

There were around 10 papers, including British mouthpieces Civil and Military Gazette, The Panjab Gazette and The Panjab Chronicle, which opposed the Akali movement.