Indian elements abound in this collection of Ragamala paintings, but visual rendering carries an unmistakable stamp of Nepal 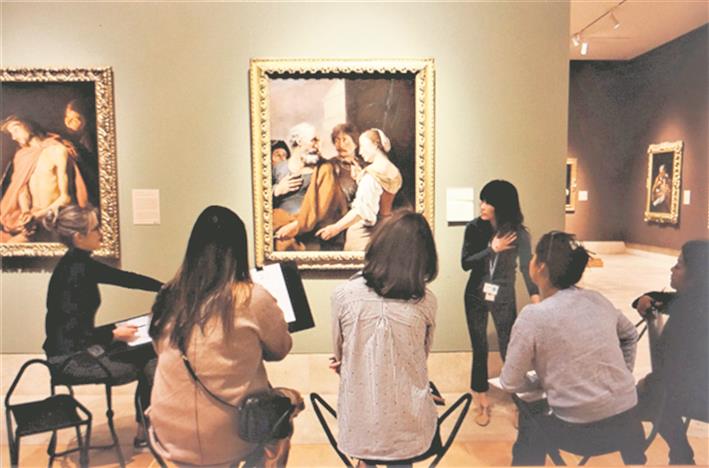 A guided tour in a gallery of the Norton Simon Museum, Pasadena.

“Rhythm and harmony find their way into the inward places of the soul.” — Plato

“Music was my refuge. I could crawl into the space between the notes and curl my back to loneliness.”— Maya Angelou

I confess I know nothing about classical music in Nepal; nor do I know much of painting in that enchanted land, save some Buddhist thangkas or those long, painted scrolls on cloth that tell of tales old and new. But I was greatly drawn to a series of paintings from Nepal that I chanced upon recently: paintings that dealt with music in the time-honoured Indian tradition of Ragamala paintings which bring everything brilliantly together — music, image and text. Ragamalas, as we know, are ‘garlands of melodies’, each melody a complete entity in itself but strung together with others to form a blooming, fragrant whole, as it were: starting with the six principal ragas — Bhairava, Deepak, Sri, Malkaunsa, Megha and Hindola — and incorporating at least five ‘wives’, called raginis, of each raga. There are variations of course, but, in general, a complete set will consist of 36 modes which are rendered in the form of 36 paintings. Sometimes ragaputras are also brought in, and the list expands, but we leave that out, at least for the time being.

These Ragamala paintings from Nepal are now housed at the famous, elegantly appointed, Norton Simon Museum at Pasadena in California, forming as they do part of the Museum’s substantial South Asia holdings. In most minds, at least in Indian minds, that Museum, which holds untold treasures of western art, might be associated just with the famous case of a contested Nataraja image — the Shivapuram Nataraja as it came to be called — which the Museum had acquired through dubious channels but had eventually agreed to return to India following a case and a compromise. But these Ragamala paintings are all securely there, having been acquired some 40 years ago. The set is not complete, falling a little short of the number 36, but whatever their number, they are of commanding interest.

Ragamala paintings are not abundant in Nepal, to be sure. But, somewhere in the first half of the 17th century, when Malla kings with their cultural roots strongly embedded in India ruled large parts of Nepal, these paintings based on Indian classical melodies appear to have been made. There are no names, whether of painters or patrons, that have come down, but everywhere, in each detail virtually, one sees a fusion of Indian and Nepalese elements. To begin with, the very idea of creating visual parallels to musical modes must have come from India, and the folios of this Ragamala are visibly based on Indian models. The names of the ragas and raginis — Bhairava, Sri, Patamanjari, Kakubha, Devakari, Velavali, Gurjari, and the like — come from Indian texts and Indian practice. In the figures one sees — personifications of musical modes — are reflected different moods, different situations, as in Indian series of the same theme, but they are isolated and placed routinely within frames of scalloped arches. In Indian fashion, the paintings bear texts which here are inscribed in Sanskrit written in bold Devanagari characters, describing each mode followed by its name and number in the sequence and placed in the spandrils and registers above the arches. The Indian impress — one is hesitant to call it a shadow — is visible all over each folio. The facial types, especially of women, are however all Nepali-looking, fleshy and not particularly delicate — not the lissome nayika-like raginis of Indian ragamalas; the costumes, especially of men wearing tall conical turbans, are all local. A prominent giveaway is the series of stylised soft lotus petals, or mountain peaks, spreading out at the bottom, below the frame of each image: their source is emphatically local, coming as they do from Nepalese-Tibetan Buddhist thangkas or icons in bronze.

Quite remarkable, and so different from Indian renderings, is an image like that of Bhairava, the first among all ragas. The description of Bhairava in the text above — “his hair tied in a jata, body adorned with ashes, carrying in his hands a trident and a khatvanga, three-eyed, the goddess Ganga in his hair, appears (the lord) Bhairava” — comes from familiar iconography in Indian texts, but the visual rendering here closely follows Tantric Buddhist sources. The deity, fierce-looking, adorned with elaborate jewellery, rich strings of which wrap themselves around each limb and hang down, mouth wide open, bulging eyes, the body in alidha posture, legs stretched far apart, one bent and the other extended, could, one imagines, have walked into this series from a Vajrayana thangka, ready to cast demons out. It would be hard to find a Bhairava image like this in an Indian ragamala, but here, for a Nepali audience, an icon such as this, conveying ferocity, would have been the most natural of choices to bring in.

It is not all like this, however, and one sees raginis cast more or less as winsome nayikas: Gurjari sits by herself, lost in thought, musical instrument in hands, flanked by flowering trees; Sarangi engages in conversation with the sage Narada, perhaps discussing fine points of music; Hindola, thinking of her absent lover, sways, seated in a cushioned swing which an attendant keeps gently pushing; Gandhari, ‘full-breasted, slim-waisted, of a face beauteous as the moon’, treads lightly in a landscape; Devakari, accompanied by a sakhi, stands under a flowering bough, extending an arm to pluck a leaf. It is a world created for a connoisseur of music, or painting: just possibly of both.

Texts define a raga as something that ‘colours the mind’.