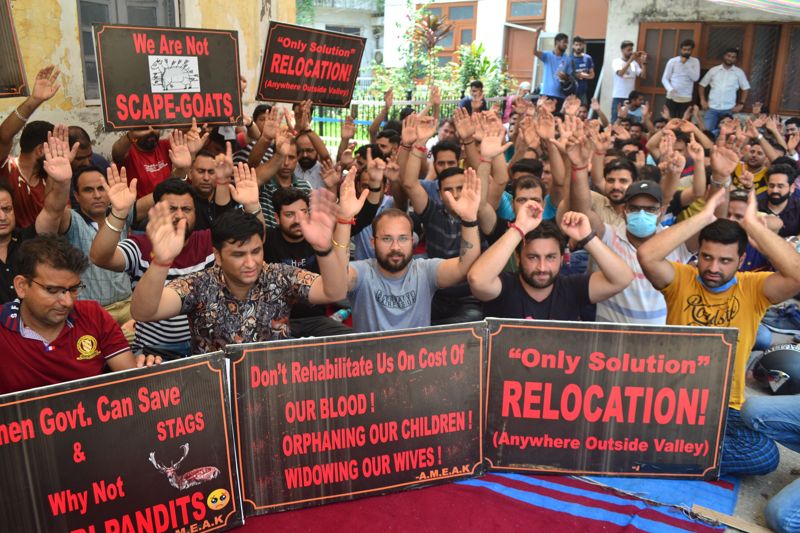 The employees serving in Kashmir under the PM package have been holding protests in Jammu for over a month now. Their key demand is relocation to Jammu till the situation becomes conducive in the Valley. Photos: Mohit Sharma

The targeted killings of Kashmiri Pandits and Hindus employed in the Valley have triggered a wave of fear, with the staff unwilling to return, holding protests demanding their ‘safe relocation’. Renu Sud Sinha reports from Jammu

THEY shot Rahul in the arm on which he had a tattoo of Shankar (Lord Shiva),” says his wife Meenakshi Bhatt. Rahul, a Kashmiri Pandit (KP), was killed in Budgam, Kashmir, on May 12. “But he never cared to hide the tattoo. He’d say that ‘even without it, everyone knows who I am’.” A clerk in the Revenue Department, Rahul Bhatt was one of the 6,000 employees working in the Valley under the PM package for Kashmiri migrants; non-migrant Kashmiri Pandits came within the ambit only this year. His killing, the first of many in recent months, has been the trigger point for protests and yet another ‘exodus’ from the Valley. At least 80 per cent of these employees have since returned to Jammu, where they have been holding sit-ins, seeking a ‘return to safety’.

“He’d help everyone, often coming home late at night. Everyone around loved him, at least that’s what he believed, and had never any doubts about his safety. In the end, this blind faith killed him,” says a forlorn Meenakshi. “While the people and officials in Jammu have rallied around us, there has not been a single phone call offering condolences from his seniors and colleagues from Budgam.”

Married in 2013, she has slowly started picking up the pieces and arranging them, as Rahul would have wanted, beginning with dance classes for their little daughter, who wants to be an IAS officer when she grows up.

Sana (13), Rajni Bala’s teenage daughter, on the other hand, is yet to process the blow life has dealt her. Bala, a teacher from Samba who was recruited under the inter-district recruitment policy in 2009, was shot dead on May 31 on the school premises in Kulgam, where she had been posted.

Her husband Raj Kumar, also a teacher, was posted in another school nearby. “Ever since a Rajput driver was killed in Kakran, barely a kilometre away a month earlier, my wife had been fearing for our safety and had put in an application to the Chief Education Officer for a posting at a safer place. But our plea was ignored and we were told that the threat perception is only for KPs and not Jammu Dogras like us, or other communities. We believed them and that cost us dear,” says Raj Kumar.

June 2 saw another targeted killing, that of a young bank manager, Vijay Beniwal from Hanumangarh in Rajasthan. Married just two months before, Beniwal was posted in Kulgam.

“It’s now either our jobs or our lives,” says Rubon Saproo, a teacher posted in Srinagar, who has been on a protest sit-in in Jammu for a month. Saproo was one of the first to join under this job scheme in 2010. After the targeted killings of KPs, Kashmiri Hindus and non-Kashmiris started last year, the horrors of 1990 have come back to haunt him and the 6,000 other migrants rehabilitated under the scheme.

The employment scheme, announced in 2008 by the then Prime Minister Manmohan Singh to facilitate the return and rehabilitation of KPs and other migrants in the Valley, was implemented in 2010. However, after the killings that started last year and escalated in May this year, most of these employees have returned to Jammu and have since been protesting there.

“The package was more of an exploitation of our needs than a rehabilitation of the KPs. My family experienced the 1990 exodus. We are grateful to the people of Jammu for giving us shelter. But they could share their resources only so much. The number of schools and colleges in Jammu was quite less in those times. We studied in the school corridors in the afternoon shift. It took me six years to graduate for no fault of mine. We were studying in Jammu but were attached to Kashmir University, where there were frequent disruptions in exams due to the situation in the Valley. By the time we graduated, we were over-age for most government jobs and private jobs were scarce in Jammu. So, taking employment under the PM’s package was the only option,” adds Saproo.

For Rakesh Pandita, another employee, posted in Baramulla, the reasons for taking the job were both financial and emotional — the security of a government job and the pull of his roots. Twelve years down the line, he feels it was a “wrong decision”. “The job was not what we imagined or what was promised. We have been living away from our families as the accommodation in the transit camps is scarce. Social acceptance is zero,” he says.

Saproo and Pandita feel their journey mirrors that of the other KPs posted in the Valley — social isolation, loss of cultural and religious identity. “I would tie a hanky on my wrist, lest the sacred thread gives away my identity. When Virat Kohli hits a six or India is winning, I have to muffle my child’s celebratory shout. You can’t work or live in an atmosphere of fear. But no one cares, since the miniscule numbers of KPs hardly form a vote bank,” says Saproo.

Sunil Kaul, posted in Anantnag, has a similar story. “Once after a visit to a local temple, I was sporting a red tilak. My Muslim colleagues kept taunting me the whole day about it. All KPs observe a special puja on our major festival of Shivratri and birthdays. But we can’t do that in the Valley. The administration usually gives advance salary on Eid but extends no such favour to us on Shivratri.”

“Our colleagues in the Valley call us ‘Hindustan ya RSS ke agent’. Our neighbours and others in Jammu dub us as freeloaders,” says an employee, working under the employment package. Posted in Anantnag, he does not want to reveal his name.

Vinit Raina, posted in Kulgam and a neighbour of banker Beniwal, came back to Jammu after his killing. “The taunting is constant. We all feel marked and betrayed, as it is clear that some locals are providing information to terrorists.”

At the protest site outside the office of the Relief Commissioner in Jammu, most protesters prefer to brave out the extreme heat conditions than living in an atmosphere of fear in the Valley. Women employees, some with little kids in tow, add strength to the tumult of voices that have only one demand — relocation to safety. While most share their woes, not many are willing to speak out. Those who do are cautious, preferring to cover their faces. One of them, posted in Kupwara, says that she is already getting threat calls for speaking to the media. However, behind the flimsy protection of a dupatta, her clear voice rings out: “This package is a political stunt. There is no rehabilitation or safety. We only get bullets, jeers and leers. My Muslim colleagues openly say that ‘you are a Hindu girl from Jammu... we will teach you a lesson’. But why? I want to live like the rest of the Indian citizens.”

Dr Agnishekhar, convener of Panun Kashmir (PK), an organisation representing displaced KPs, says, “We were part of the initial round table conferences to seek a relief and rehabilitation package for the KPs but minus its draconian conditions. However, both the Central and state governments betrayed us. A starving community was ensnared to go back to a place where a jihadi mindset had already forced them to flee.”

Former DGP of Jammu and Kashmir SP Vaid agrees with some demands raised by the protesting employees. “This hybrid war was started by the ISI last year. The low-cost, high-impact new strategy of not directly engaging with the security forces and attacking soft targets can be contained over a period of time, as has been done in the past. The relief package staff can be deployed at safer places till conditions improve in the Valley,” he says.

The government, however, seems to be in no mood for a complete give-in. According to the Relief Commissioner, Jammu, Ashok Pandita, “No one had offered any security to the KPs in 1990 but now, from the Union Home Minister to the Lieutenant Governor to the Home Secretary, everyone has assured safety to these employees. We are also constructing 5,000 more quarters as well as increasing the number of transit camps. However, once the Amarnath Yatra is over, the government may mull some concrete action.”

But the defiant Kashmiri Hindu employees seem to be in no mood to relent, for now.

The PM package for Kashmiri migrants and non-migrant Kashmiri Pandits has 6,000 supernumerary posts. Under this package, these are temporary posts. If an employee quits or retires, the post ceases to exist. The employees are recruited and deployed by the J&K administration but the Central government allocates the budget for their salaries.

Under this package, the employees have to sign a judicial agreement before joining. Some conditions have created resentment among employees: