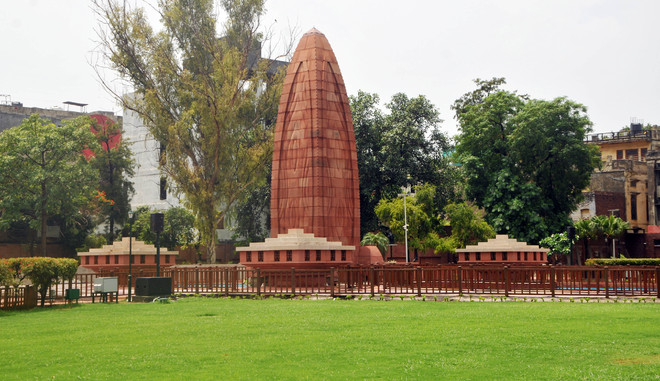 The central memorial inside the bagh is a stone structure symbolising the eternal flame in memory of those who lost their lives during the massacre.

The Jallianwala Bagh, enclosed within an area of seven acres, is the site of one of the most brutal massacres in the world history. Located in the vicinity of the Golden Temple complex, it is managed by the Jallianwala Bagh National Memorial Trust, which was established under the Jallianwala Bagh National Memorial Act, 1951. Several structures such as the Amar Jyoti, Martyrs’ Well, portico pillars representing the British soldiers, bullet marked walls and statues of nationalist leaders have been preserved inside. The premises contain several structures, a martyrs’ gallery and museum dedicated to the memory of 1,600 people, who died at the hands of the British soldiers led by General Dyer on the fateful day of April 13, 1919. The martyrs’ gallery contains a number of paintings, including those of some political leaders and one showing a number of people dead at Jallianwala Bagh. A portrait of Udham Singh is on display at the gallery and his ashes are kept in the museum. Last year, the Centre approved a renovation project that aims at building an additional museum inside the bagh and preserve the sanctity of the place, which is a memorial of national importance.