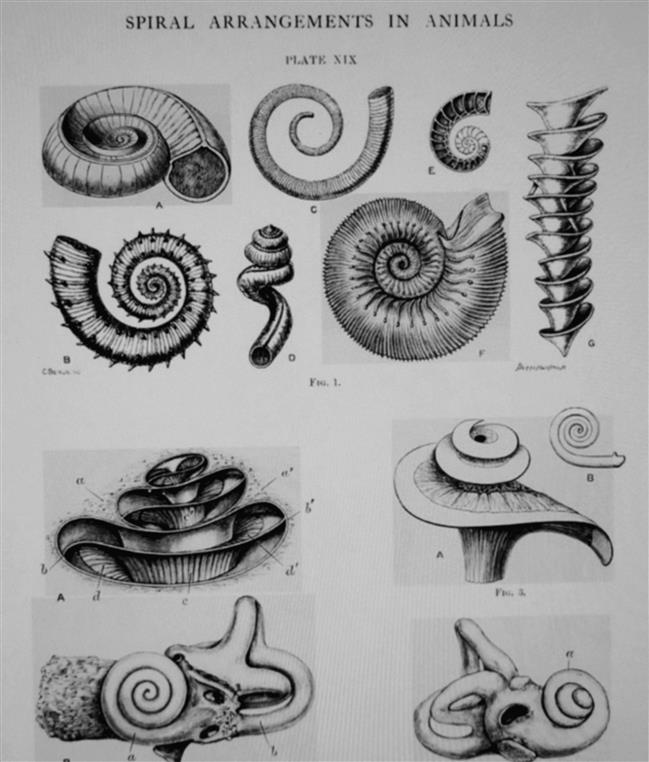 Design in Nature: Illustrated by Spiral and Other Arrangements in the Inorganic and Organic Kingdoms as Exemplified in Matter, Force, Life, Growth, Rhythms, &c., Especially in Crystals, Plants, and Animals. With Examples selected from the Reproductive, Alimentary, Respiratory, Circulatory, Nervous, Muscular, Osseous, Locomotory, and other Systems of Animals. Illustrated by nearly Two Thousand Figures, largely Original and from Nature.

Wherever we look in nature, we can see spiral forms: in the unfurling fern, the snail, the nautilus shell, the hurricane, the stirred cup of coffee, the water that swirls out of a wash bowl… Perhaps we shouldn’t be surprised to see spirals in the great star systems whirling in space.

The spiral is a spiritualised circle. In the spiral form, the circle, uncoiled, has ceased to be vicious; it has been set free.

We know, at least remember, remarkably little of James Bell Pettigrew (1834-1908), and the title of the book cited above sounds singularly un-inviting except to the pronounced specialist. And yet he — Laureate of the Institute of France, Chandos Professor of Anatomy and Medicine at the University of St Andrews, Fellow of the Royal Botanical Society, and President of another Royal Society — was one of the most engrossing scientists and writers of his times, whose work, at one time forgotten but now reprinted several times, ‘has been selected by scholars as being culturally important, and is part of the knowledge base of civilisation as we know it’.

He was, as one reads, obsessed with design in nature, finding spirals and symmetries everywhere. From observation, and his interest in locomotion, this noted naturalist had come to conceive of ‘all creatures — whether on land, in water, or in the air — as propelling themselves by throwing their bodies into spiralling curves, such that their movements were akin to waves in fluid, or to waves of sound’. But being an aviation experimenter from his early years, he decided in 1903 to emulate spiralling movements in the air by inventing a flying machine of his own, something he gave the name ‘ornithopter’. This was meant to move in rhythmic figure-of-eight curves. There is a very engaging account of that ‘halcyon day’ when he decided to fly the machine. Unfortunately, the machine was able to cover only 20m before crashing and injuring its pilot’s own ‘spiralling hip’. But Pettigrew remained unconvinced by this seeming failure. The more he explored forms and creatures in nature, the more he was convinced — in clear opposition to Darwin’s then recently advanced theory of evolution — that there was a large design in Nature, worked out by the ‘Great First Cause’, by the ‘Omni-present Framer and Holder of the Universe’. Man, he pronounced, ‘is not in any sense the product of evolution. He is not compounded of an endless number of lower animal forms which merge into each other… There was in nature no accident or chance. On the contrary, there was forethought, prescience, and design”. A controversy was raging, and Pettigrew was ranged on the opposite side of Darwin, naming his theories as ‘lame, halting, and impotent’.

Pettigrew, as one reads, ‘confessed himself totally spellbound by the mystery of Nature’s most ubiquitous, liquid, and quixotic form: the spiral’. From pointing to photographs of the Great spiralling Nebula in Andromeda, down to speaking of a cascade of more humble spiral forms, he kept emphasising the all but universal presence of the spiral in nature. The examples he took were remarkably varied: ram’s horns, bacteria from the river Thames, spiral fronds, floral stems, leaves, and tendrils. The nautilus shell, the horns of goats, gazelles and antelope, the phalanges of the Indian elephant, the turbinated inner bones of the human skull, he kept citing as great examples. But at the centre of this ‘dizzying array’ lay the sacred secret that had ‘so profoundly occupied Aristotle and Aquinas, Leonardo and Vesalius: the human heart’. The heart’s sevenfold spiral structure, this doctor pronounced, was ‘the mystery of mysteries’.

There are no final answers, no end to the secrets that lie embedded in Nature. One is constantly amazed by things one learns, or learns about. I, for instance, was not aware of what an extraordinary thing the ‘nautilus shell’ is. The nautilus is a marine creature related to squids and octopuses, said to have been originally much larger but now reduced in size to no more than 10 inches or so. Referred to often as a ‘living fossil’, the species was around long before the first dinosaurs appeared, going back, it is said, to 450 million years. The astonishing thing is that it has survived virtually unchanged. It lives in a beautiful, spiralled shell divided into increasingly larger chambers. This is how its life and work has been described. “When it first hatches from the egg, it has four chambers already formed. As it grows, it moves into the next largest space in the shell and builds a wall to seal off the old chamber.” The creature continues to grow and is known to build ‘up to 30 chambers in the course of its adult life’. But these chambers do not go waste. Because ‘the nautilus keeps these chambers filled with gas to help control its buoyancy; when it wants to dive, it adds water to the chambers’. When you see the nautilus shell in real life, a writer said, ‘it is a sight to behold. It is shaped like an elegant spiral, lined with bright mother-of-pearl’.

From here, one moves into the area of what is often called ‘sacred geometry’. For, the spiral of the nautilus is not just any spiral. Measuring it reveals that it conforms to the shape of the Golden Ratio spiral, the ‘same that can be found in the shape of our galaxy, of hurricanes, in the arrangements of sunflower seeds in the flower, in cauliflower, and pine cones’.

For the likes of me who barely know anything about the Fibonacci series, or the double-helix, this is not easy to comprehend. But the spiral, somehow, keeps returning to the mind.