The festival means different things to different people. And all of it stands to change, for once Prof Varyam Singh still remembers those days when he would walk for one full day along with his uncles to see Kullu Dasehra. There was just one rickety bus that plied on the route in the 1960s. The hordes of mela-goers, for whom it was a time to pay obeisance to local deities that converge at the mela, binge on jalebis, shop, watch folk dances and, finally, sleep in the open under the moonlit sky, outrightly outnumbered its capacity. A young Varyam and his uncles would spend a few days at the fair and then retreat to their homes in Banjar town of Kullu district.

The other Rath yatras

While Kullu Dasehra at Dhalpur grounds is the biggest celebration in the district, the festival is also marked by rath yatras at Thauva in Naggar, Haripur, Vashishth near Manali, and in Manikaran. Revellers from Kullu’s remotest valleys and farthest corners, across the state, India and the world still descend upon Dhalpur grounds, venue of the international fair. But this year will be different, very different than it has been in a long time. As elsewhere in the world, the pandemic has cast its shadow over the Dasehra celebrations here as well, with just a handful of deities allowed to come; more than 250 usually participate. No commercial activities will be allowed. 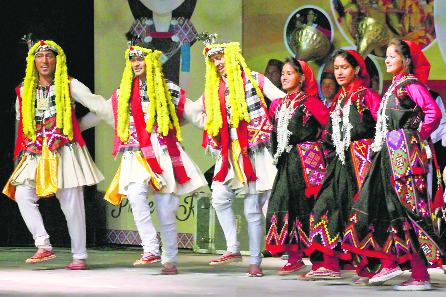 Every year, the day Dasehra is celebrated across India, seven-day celebrations centred around Lord Raghunath, the chief deity of Kullu, begin. To pay obeisance to him come deities from various villages of Kullu district. During the week that ensues on Vijaydashmi (it falls on October 25 this year), gods meet gods, the faithful meet the curious, and all of them intermingle, basking in the colourful traditions of colourful gods.

Prof Varyam Singh, former dean, School of Languages, Literature and Cultural Studies, at Jawaharlal Nehru University, says this intermingling of the deities and their people is what will be missed most this year. “Kullu Dasehra is an opportunity for people to be together. This milan — ritualistic or traditional — is at the heart of Dasehra. It is the biggest gathering this region sees. People come from as far as Saraj, Manikaran and Manali. Their coming together is coming together of different raths, different kinds of music. The richness is astonishing,” he says. 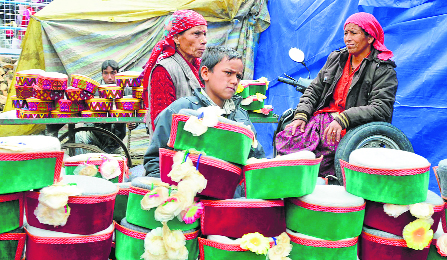 Amid the coronavirus pandemic, this richness won’t be on display in abundance. There will be music, but no dancers swinging to its beats. Seven deities have been allowed to come, but the number of visitors will be watched by the administration.

Former district language officer and researcher Sita Ram Thakur says times like these need to be treated differently. “Covid-19 poses a threat to mankind. We can’t take things lightly. Some deities will come with their raths, some will show symbolic presence and some are yet to decide on their course of action,” he says.

Members of Kullu Kardar Sangh, the umbrella body of local deities, feel a balance needs to be struck between tradition and safety. Heeralal, a member of the body, says tradition will be followed, but not in entirety. “Earlier the administration just wanted symbolic presence, the raths were not being allowed. They have now been allowed, but what about those who carry the palanquins to town, walking for days altogether? They can’t be expected to not stay.” Agrees Dot Ram Thakur, former head of the association. “We know that we all have to keep safe but one needs to see whether the curbs are realistic or not. There are so many ceremonies related to the deities. Aartis and pujas are held. Without people, nothing is possible,” he says.

Ishita R. Girish, a storyteller from the valley, agrees Dasehra is an integral part of our lives, but understands that this is a year of doubts and concerns. She just hopes people act responsibly and stay at home. “It is a wise step to decide that the Dasehra ceremonies will be carried out with least possible people present. It’d be wiser if the administration stays strict about gatherings.”

The tradition of Dasehra goes back to the 17th century. In recent history, however, the only time Lord Raghunath did not attend the festival was in 1973. This was a year after a firing incident during the festival had left one person dead. A tiff between the royal family and the administration had led to confrontation and the police had opened fire.

Incidentally, this had happened the very year Kullu Dasehra was declared ‘international festival’. The following decades saw the best of national and international cultural troupes perform at the Lal Chand Prarthi Kala Kendra, the open air auditorium. It has subsequently come to host a plethora of other activities — from talent competitions for youth in the day to Bollywood nights.

Yatin Pandit, a researcher of Kullu's history, dedicated to the culture, traditions and history of Kullu, says this year will impact the spiritual and tribal culture of the place. “Some deities have been invited. The others will obviously feel left out. Dhur vivaad [the years-old tussle between deities Shringa Rishi and Balu Nag on who will stay on Lord Raghunath’s right side during the rath yatra] has hogged the limelight for long. That will be missing. The scale of celebrations will obviously come down. Something, somewhere will be lost,” he says.

Hasn’t a lot been lost, anyways, we ask, and Pandit agrees. “A lot. For instance, the performance of folk dance laaldi is more ritualistic now. Earlier, there would be two pandals, one by Kullu royals and the other by Raja Shangri. That tradition died with the death of his descendents. Someone who has seen the British Pathe documentaries on Dasehra would have noticed Ladakhis in the video. That has faded away.” The Punjab District Gazetteers, 1917, also makes a mention of this: “... additional interest is lent to it by the presence of picturesquely clad Yarkandis and Ladakhis who have just finished their long journey from Central Asia with ponies and charas, silks and carpets for sale in the plains. The large concourse of people enables them to do some trade on the spot, and a good deal of business is also done in the sale of shoes, brass and copper vessels, cloth and jewellery.”

Shopping still is a major draw at the festival and the bulk of buying of household items (utensils, spices, furnishings, etc.) is done by locals during Dasehra only. Commercialisation has taken a toll on the festival, and not just in a negative way. “The yearly nazrana that the deities are given by the administration won’t be given to those not attending. That nazrana too comes from the activities at the mela. The loss is going to be tremendous for all,” says Heeralal.

Amid all this, Prof Varyam’s heart goes out to the poor who would buy their winter stuff from the huge market for second-hand clothes that comes up in the jhoola ground every year. “A new winter coat comes for Rs4,000, but here one would get it for Rs500. It worked for the poor man. It will be missed.”

The kids will miss the massive swings, the youngsters their days and evenings spent in gay abandon. Meeting long lost friends at exhibition ground; marvelling at the jumbo farm produce in the exhibition halls, trying one’s luck along with hundreds of others at Sutradhar tambola; spending chilly evenings at the open-air auditorium; getting goosebumps by the Well of Death... so much will be missed.