Donning the dual hats of being an architect and an artist, Martand Khosla dwelled into the realms of the mind to curate ‘The Thought of Architecture’ as a series of 10 virtual experiences created with the works of 10 artists over the span of a year. These are a part of New Delhi-based Nature Morte gallery’s virtual viewing room experiences. 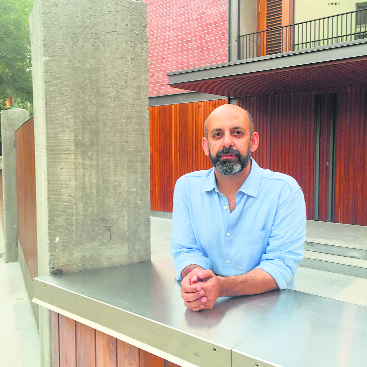 The pandemic has compelled artists and galleries to introspect the online space as a means of creating an interface between people and processes and the backlit screens have become one’s prime and most critical tool of communication. When Martand was internalising as to how a virtual site is actually a “siteless site”, wherein the usual trappings of materiality, light, structure and dimension become redundant, he decided to break free from the conventions of architectural norms to keep his viewing space fluid and free-flowing.

“I started researching histories of architecture, cinema and virtual gaming to form the reference point for my series, when I realised that it is only ideas, stories and emotions that are the genesis of any creative project, architectural or otherwise. What begins as a thought is then translated into sketches followed by actual drawings, and once the idea is firmed and confirmed, three-dimensional models are deployed to give it tangibility,” he says.

Since none of this was needed here, he opines, “An object starts the idea of space while an event starts the idea of time. If we remove the object and time from any idea, then it can be articulated in abstraction, without limits and boundaries. I decided to deliberately break away from the idea of a viewing room with walls and displays under perfect focus lights. Instead, I created rectilinear grids within Euclidean geometric constructions and decided to juxtapose the artist’s creations against it. This formed the basis of this iterative 10-series project.”

The series kickstarts with Jitish Kallat’s ‘Circadian Series’ comprising a series of drawings created by the artist in March, when he was in isolation in his studio following an overseas journey. Here, he started watering the plants on his terrace and embarked on tracing shadows from fallen twigs. How the sunlight played with the water and created reflections in deeper or lighter shades as dawn turned to dusk was a study in deep observation — a meditative process, which is a part of Jitish’s practice of marking passage of time as part of a narrative. What is interesting to observe is that Martand uses nothingness as the genesis of his virtual viewing series and there lies a huge similarity and synchronisation with the philosophy of the world being born out of nothingness, not even time. As German polymath and logician Gottfried Leibniz describes: “Space exists only as a relation between objects, and has no existence apart from the existence of those objects. The space, defined as a series of coexistence is not an empirical but a rational truth: it is a virtual entity.”

Going forward, Martand leaves his grid more and more unstructured and blurry, trying to undo and un-structure from any sense of confinement. This is deliberate as it sets ground zero for the second artist, thereby starting from a clean slate every time…