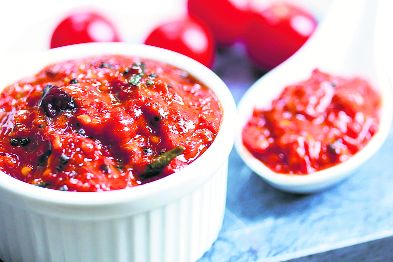 There is something about dark rain-bearing clouds that makes one nostalgic and at the same time pine for hot (piping hot as well as chilli hot) food. The trouble is, at the same time one is much too lazy to exert in the kitchen. It was one of those days that we discovered the joys of tamatar sarson ki chutney. Don’t go by the name, it is far removed from the chutney that is traditionally served with snacks or in a meal in minuscule quantities — just enough to lick that justifies the name. This one is more like the South Indian chutney, which is served as an accomplished accompaniment with dosas, idlis, et al.

The lady who introduced us to tamatar sarson ki chutney hails from Jharkhand and assures us that this is a favourite among the villagers in her state. More often than not, the farmers have a bumper crop of tomatoes, and this, unfortunately for them, reduces the price of the product. A few of them have the know-how and the resources to make sauce puree and pickles and there have been times when they have scattered truckloads of ripe red tomatoes on the road to protest against government apathy to their plight.

But that is another story. To return to tamatar sarson ki chutney — really potent pungent stuff that can be enjoyed equally with roti or rice. Increase the quantity of tomatoes and thicken the gravy, and the chutney is transformed into a wonderful desi salad. Don’t be discouraged by the cooking time. This beauty involves very little work and almost cooks by itself. Do try this one when it is pouring the next time.

The dish should always be cooked in mustard oil, much of the unique charm is lost if refined oil is used.

Wash and cut the tomatoes into thick slices. Remove the eyelids and slit the green chilli in half. Heat oil in a kadhai till it reaches smoking point. Add cumin seeds and methidana. When these splutter, reduce heat to medium. As the seeds change colour, add the tomatoes and green chilli to kadhai and cook for five minutes. The tomatoes should lose their rawness but not become mushy. In a blender, add mustard seeds, black peppercorn, and garlic and grind with 2 tsp of water to obtain a smooth paste. Keep aside. Add salt, haldi in kadhai. Add masala paste and cook for five minutes on high flame. Reduce heat.

Add 1/2 cup water and let it simmer for five minutes or until half the water evaporates. Add quarter cup water and bring to boil till the desired consistency is obtained. Remove from flame. Serve and enjoy!