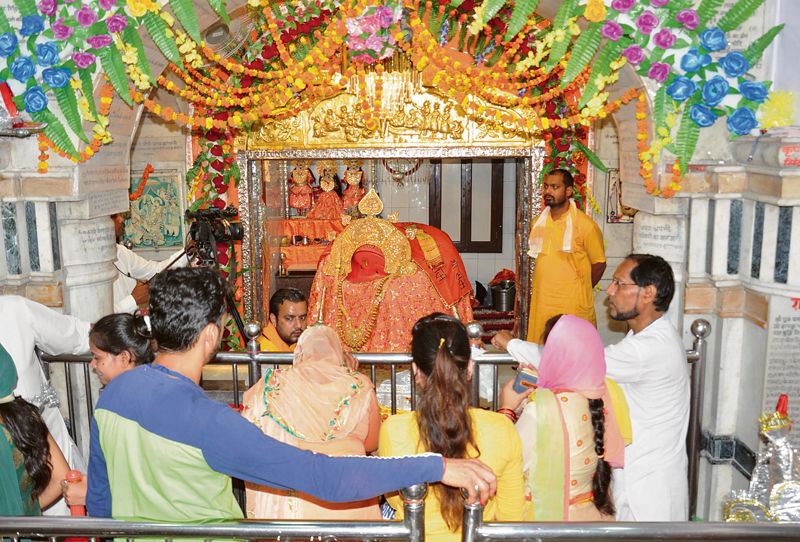 The sanctum sanctorum of Bada Hanuman Temple, where one can see the idol of Lord Hanuman in a resting state.

As navratris begin, the holy city is hosting its 10-day Langoor Mela that has now achieved popularity across continents. Tribune correspondent Neha Walia and lensman Sunil Kumar explore the history and significance of the fair along with the roots of Bada Hanuman Temple, which hosts this annual event

Of all the rituals, festivals and traditions that Amritsar is famous for, the Langoor Mela is definitely the most interesting one. For 10 days, hundreds of children come to the historic Bada Hanuman Temple. According to the temple priests and historic accounts, the mela tradition began centuries ago, with a belief that those couples, who wish to have a male child, come to Bada Hanuman temple and pray. The ones, whose wishes are fulfilled, then bring their children dressed as langoors in a way to thank Lord Hanuman.

The temple’s history is as interesting as its traditions. It is among the only three temples in the country to have Lord Hanuman in resting state. The other two temples are in Prayagraj and Hanuman Garhi. Legend has it that the temple was built at a place where Luv and Kush, sons of Lord Rama, lived with their mother Sita. They had tied Lord Hanuman to the banyan tree, when he came to take them back to Ayodhya. The tree is still inside the temple premises and preserved by the temple management.

A matter of faith, parents believe that if you bring your children, dressed as a langoor during the navratris to the temple, Lord Hanuman will bless them in all their endeavours throughout their life. Children, who dress up as langoors and their parents, have to follow a strict regime by following all rules that sworn celibates or Brahmcharis do during these 10 days. They have to remain bare feet and sleep on the floor, eating satvik food, shun finery and paying obeisance at the temple every day.

The popularity of the mela is such that even NRIs visit the city to participate in the mela with their kids. Adding to some entertainment and fun to faith, parents hire dholis and form a vaanar sena comprising kids dressed as langoors being led by adults, who, too, don langoor avtar, when they visit the temple.