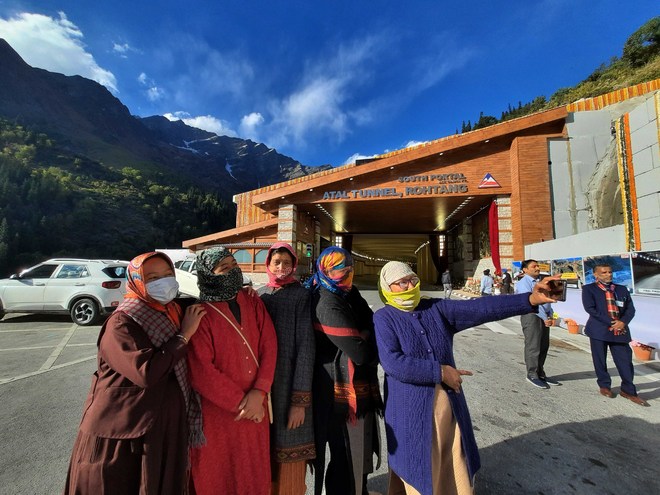 Lahauli women take a selfie at the tunnel gate. File photo: The Tribune

This winter, it was different in Lahaul, and it will be so for all times to come.

On October 3 last year, the Atal Tunnel at Rohtang, connecting Kullu valley with Lahaul, opened to the public. For more than a generation of Lahaulis, what was for long a mirage, became a reality — apparently both bitter and sweet. Earlier, the valley remained cut off for a good six months a year. That’s no longer the case. Whether it is an emergency or an occasion for celebration, the tunnel is a magical portal to the other side.

Abhishek, a local based in Manali, says, “Earlier going to Lahaul was a week-long trip. Now, you can leave in the morning, get work done in Lahaul during the day and be back in Manali by the evening.”

Dried peas and leafy vegetables, as also dried meat, would perhaps be a thing of the past in Lahaul now, for fresh vegetables were available through this winter for the first time. The locals have always grown some varieties for personal consumption, but the options have been limited.

Five lakh tourists have visited Atal Tunnel in the last five months, and most have made it a point to visit at least Sissu, the nearest village, or Keylong, the district headquarters. In a bid to attract more tourists, a snow festival began on January 25. Hayerpa says they plan to run it across different panchayats and make it the longest running winter fest in the world. “It showcases traditional sports, folk dance, music, cuisine, artifacts, dresses and much more — all organised with zero budgetary support from the government. We also hope to be in contention for the SKOCH Awards.” But not everyone is on the same page. Ajey, a Hindi poet from Lahaul, says, “The fest’s prolonged nature is tiring and repetitive. We are opening ourselves to the outside world for the first time. It deserves to be showcased on a superior platform that is aesthetic, shorter and dignified.”

The administration recently organised a single-window camp for homestays and over 400 were registered with an overall target of 600. A number of hotels are also coming up along the highway. Sushila Rana, pradhan of Goushal gram panchayat, says, “There is considerable interest, but it’s too early to say how this will pan out. There is much to learn and adjust.”

The logistics to handle the crowds are also not available. Even basic facilities like toilets, garbage bins, parking space or guidance are missing. Prem Chand, president of Save Lahaul Spiti Society, says, “Three years ago, we urged the government to form the District Tourism Development Council for Lahaul and Spiti, but no action has been taken till date.”

A clash of cultures is inevitable too. It is not uncommon to notice cars blaring loud music, or shirtless tourists dancing on the roadside. There have also been reports of eve-teasing and thefts. Vijay Kapoor, ex-pradhan, says, “It is normal for us to leave sacks of potatoes near the pick-up points. But this time there have been reports of hundreds of sacks getting stolen. Even bags of vermi-compost have gone missing. In Phuda, apple orchards were emptied.”

The most serious risk, however, is the renewed enthusiasm among developers to take up hydro-electric power projects.

Needless to say, Lahaul is undergoing a churning. As former Union minister MS Gill suggests in his book on the region, the Lahaulis are hardworking, proud and receptive to new ideas. Those traits could yet be our guiding light.