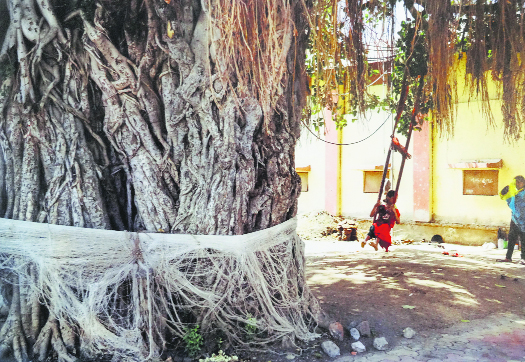 The banyan tree under which Gandhiji gave his speech, at Samni

I use the presence of your friend (Sundaram) in our home to send you these lines. You have shown through your works, that it is possible to succeed without violence even with those who have not discarded the method of violence. We may hope that your example will spread beyond the borders of your country, and will help to establish an international authority, respected by all, that will take decisions and replace war conflicts.

“Generations to come will scarce believe that such a one as this ever in flesh and blood walked upon this earth.”

In the dark, brutal times in which we are living, anything that reminds us of higher things — ideals, lives led in the light of a moral code, even a sense of balance — comes as a breath of fresh air. At least I could feel a gust when I picked up a just released book on Gandhiji’s celebrated Salt March to Dandi. 23 Grams of Salt is how it is tantalisingly titled; it could even — considering what Gandhiji was, and stood for — have been called More than a Pair of Spectacles, the latter object being almost all that one sees of him these days. The book published by — who else? — the Navajivan Trust of Ahmedabad that Gandhiji had founded in 1929, owes itself to the imagination and dedication of young Anuj Ambalal, a gifted photographer who worked on this wonderful project for close to two years, literally retracing Gandhiji’s iconic march to Dandi, photographing sites in every single village and town that fell on the 390-km route from Ahmedabad to that seaside village. The book could be seen by most people as a dense photographic essay, but if one does that, one would be in error. For the narrative text that Anuj has put together, in collaboration with Rijuta Mehta, is arresting on its own: detailed, textured, and filled with sensitive observations as it is.

Patiently, with none of the sense of haste that characterises our lives, Anuj travelled the entire route of the March, stopping at nearly every place that Gandhiji and his co-marchers — 80 they were in the beginning when they set off from the Sabarmati Ashram, but the numbers kept growing, swelling to tens of thousands by the time the March reached Dandi — talking to people, locating dwellings and rooms where Gandhiji had stayed, trees and fields redolent of his presence, and photographing. Much has changed from those times — the event occurred after all in 1930, 90 years back — for buildings have got demolished, streets re-done, fields encroached upon, but, interestingly, at nearly all places people were able to point to exact spots where Gandhiji had rested, or slept the night, or addressed throngs of people. In schools he would see images — murals or plaster busts, of whatever quality — of Gandhiji installed, his words emblazoned. Rarely was he able to meet someone who had actually seen Gandhiji, or taken part in the March, but there were a few: a caretaker who had opened a room for him, a lady whose mother-in-law had cooked a meal for the satyagrahis, a lowly worker who had milked a goat for Gandhiji. Memories grow dim and fade but, as if by magic, the mere mention of Gandhiji and the Dandi March, they flickered into life again. Interwoven with this narrative of visits are Anuj’s own private experiences: the mysterious but unexplained knocking on the door of his room at 2 in the morning at one place; the jumping over railings put up on the Ellis Bridge in Ahmedabad, a site which the satyagrahis avoided getting on to, because it had been built by the British; locating a centenarian who had seen Gandhiji and the satyagrahis but then losing him. As you read the narrative and see the images — ‘consistently beautiful: very aestheticised, very stilled, very silent’, as Timothy Hyman puts it, or ‘peeling walls of amnesia layer by layer’, in Gulam Sheikh’s words — you get the sensation of being there with Anuj, who himself must have had the sensation that he was present when it was all happening. However, there is no attempt at creating drama in these photographs, no technical pyrotechnics. All that is there is an air of simplicity, almost as if the sattvik quality of the event and of Gandhiji’s presence needed to be captured, and preserved, as it was.

The volume, apart from Anuj’s own highly engaged narrative, is enriched by contributions — short but energising — by Thomas Weber who wrote that wonderful book, On the Salt March, and by Tridip Suhrud, distinguished scholar and former Director of the Sabarmati Ashram. Suhrud’s reading of a painting by Haku Shah — Meetha no Satyagraha (meethu in Gujarati stands for salt) is moving, showing a barely clad Gandhiji bending to pick up, as a symbol of defiance of British authority, a lump of salt: those 23 grams spoken of in the title. “Haku Shah’s MKG (Gandhiji) is the mendicant,” he writes, “not because he would not return to Hriday Kunj at Sabarmati, but because he has no need for a home, a dwelling now. The barest of loincloth captures the state of being a mendicant who seeks sacrifice from us and would grant us the boon of Swaraj in return. There are no surging ecstatic crowds, no poet Sarojini Naidu exclaiming ‘Hail, Deliverer’. But there is a bird, proud of its crown. A bird that is udgriva, one whose neck is turned upwards, a bird that is all of us who experience in that moment a surge of freedom that allowed us to look heavenwards.”

A sense of calm descends.