Positives & negatives, let’s all make it work : The Tribune India

The Group of Ministers, post Kargil review, had elaborated four roles for CDS. All these have been incorporated in the charter, along with op control of tri-service entities like space and cyber. These would give the Chief of Defence Staff a modicum of control over the three services 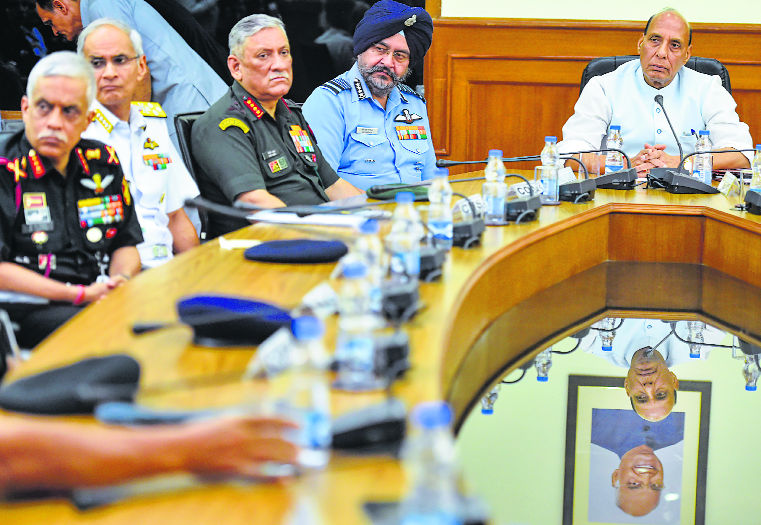 The word CDS — Chief of Defence Staff — raises passions of varied kind in any discussion, but now that the government has announced the appointment, the right thing would be to move ahead and make it work. Even though the terms and conditions, responsibilities and span of control of the CDS have been promulgated, they appear to be just the outline, with the fleshing out yet to be done.

The Group of Ministers, post the Kargil review, had elaborated four roles for the CDS. First, that he should be the principal military adviser to the Raksha Mantri. Second, to exercise administrative control over strategic forces; third, enhance the efficiency and effectiveness of the planning and budgeting process through intra and inter-service prioritisation of acquisitions and lastly, ensure required jointness amongst the three services. A point to remember is that no operational control of the war fighters was envisaged for the CDS, with that mantle staying with the service chiefs. All these have been incorporated in the charter of the CDS, along with op control of tri-service entities like space and cyber that were not at the forefront when the Kargil review was done. These are all for the good and would give the CDS a modicum of control over the three services. There are, however, three issues that need looking into.

First, as expected, the CDS would be a four-star officer; what is a good surprise is that a new Department of Military Affairs (DMA) has been created. The CDS would offer military advice to the Raksha Mantri but would have no direct access to the Prime Minister unlike in the US, where Chairman Joint Chiefs of Staff is the principal military adviser to the President, the Secretary of Defense and their National Security Council. This is an issue that needs looking into since matters military are in a league of their own in the governance of a country and the PM, after all, is the executive head of the nation.

Second, while transferring to the CDS various entities like the three services, Territorial Army, etc, which presently are with the Defence Secretary in the Department of Defence (DoD) vide the Transaction of Business Rules, the Coast Guard has been left out. Considering that coastal security is a vital task, the Coast Guard too should have been placed under the CDS to ensure seamless security of our long coastline and huge EEZ.

Third, the task of ‘procurement exclusive to defence services’ has been transferred to the CDS, but without capital acquisitions. This undercuts one of the most important charge of the CDS — equipping the three services in a timely manner to meet envisaged challenges.

So, as things stand, the CDS can only do inter se acquisition prioritisation “…based on the anticipated budget”. This leads to two inferences. The positive one is that it would give the CDS indirect control on how the three services would shape up to meet the anticipated challenges. The negative aspect is that the financial purse strings would remain with the Defence Secretary, who would control the acquisitions by virtue of the fact that he would still be the chief accountant of the MoD and that the DG Acquisitions would continue to be ‘under his command’. In a doctrinal sense, the absence of ‘ownership’ of the acquisition process would continue to plague the system and, just as at present, no one entity would be accountable for the capability-building process; this is a fatal kink. Just to give one example, can blame be pinned on anyone of why the IAF lost the Beyond Visual Range edge in air-to-air combat, seen on February 27 over Naushera this year — a fact spoken about by no less than the then Air Chief in the Military LitFest at Chandigarh recently?

If total ‘ownership’ of building capability (prioritisation and budget utilisation) devolves on the CDS, then he automatically comes firmly into the driver’s seat in the following manner. First, planning how the services, together, are going to address various contingencies and conflicts that may arise in future; so, the major sticking point, that of each service fighting its own war, is taken care of. Second, once jointly thought-through plans are drawn up, the capabilities, and hence the acquisitions required by each service get prioritised (under tutelage of the CDS) to execute the envisaged war tasks. Third, since service chiefs would still be the executors of the war plans, the core competencies of each service would be utilised optimally, with the CDS having a bird’s eye view enabling him to make the required changes in a joint manner; prioritisation and budgetary expenditure, thus, would fall in place. Sadly, as pointed out earlier, the two have been split, leaving no one entity having ‘ownership’ of the process.

Can all this be achieved without an overhaul of the higher defence organisation, which includes the Department of Defence, which is under the Defence Secretary? While the DMA under the CDS would have military and civilian personnel, there is no word in the notification on the inclusion of military specialists in the DoD; this goes against the basic grain of integration as the Defence Secretary would still have vital roles to perform in keeping the services fighting-fit. This would be possible only if the DoD has its own civilian cadre of defence specialists; this requirement of permanence to build specialisation applies equally to civilians who come into the DMA.

The critical importance of specialisation in a technical service is amply visible in the Indian Railways where the Railway Board does not have a single bureaucrat and is staffed only with experts; ISRO and DRDO are also configured in a similar manner, as is the MEA (where there are only IFS officers). As author Anit Mukerjee, while discussing civil-military relations in his recent book The Absent Dialogue, puts it, “Appointment to a post does not make for instant expertise!” He adds that in the MoD, “there is Defence Wisdom Deficit”, alluding to the fact that an IAS officer from any other ministry, be it agriculture or power, road transport or social welfare, arrives one fine day and starts taking decisions on matters military. This does not happen in mature democracies; the civil servants in the UK MoD are permanently in the ministry while the US has a specialised Defence Acquisition Corps in which are posted personnel trained by their Defence Acquisition University. So, inducting military expertise is an imperative in the DoD if the combination of the two principal advisers, civilian and military, is to deliver the expected results. Their major task would be to ensure that the aspect of ‘capability’ that the services want, and ‘processes’ that the MoD insists on (rightly), are seamlessly dovetailed for timely execution of plans.

Capability building requires money, a lot of it. So, it is good that that the CDS would be a member of policy-making bodies like the Defence Planning Committee and the Executive Council of the Nuclear Command Authority. Hopefully, the capability accretion requirements of the services would get their due importance in terms of financial allocations in the tussles within the government in the guns versus butter debate.

The government has taken the first important step of going ahead and announcing the setting up of the CDS. It is imperative that all involved — civilians, uniformed personnel and politicians — avoid turf wars and keep an open mind, as many changes/additions would be required to fine-tune the implementation of the concept. All must put their shoulders to the wheel to make it succeed for the nation’s good.