Punjab’s farming is already highly mechanised, putting farmers under heavy debt. We need to go for low-cost, on-field solutions to deal with paddy straw instead of using machines that lie idle for the rest of the year, consume a large amount of fuel and deny essential nutrients to the soil. The state government and agriculture experts should avoid batting for market-oriented solutions which are only going to worsen Punjab’s socio-economic and ecological crisis. 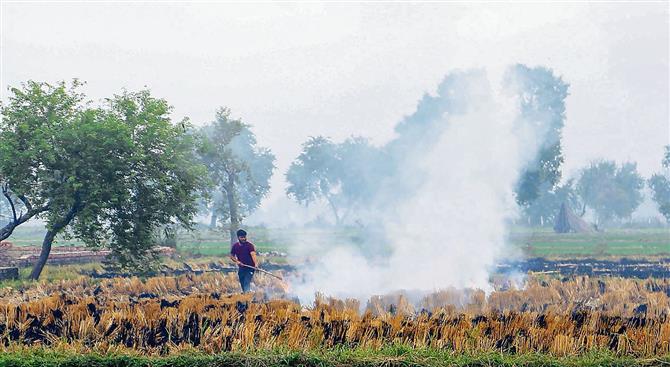 THE market forces have found an opportunity in adversity. Paddy straw burning in Punjab is a problem that continues to make farm machine manufacturers richer by crores of rupees. Every year, we get new and costlier machines which are marketed as the ‘ultimate solution’ to dispose of the surplus straw, but the menace persists. This is because all these farm machines have a limitation. Whether it’s a Happy Seeder, Super Seeder or Baler-Raker combination, these can’t cover more than 100 acres in a season, even as Punjab grows paddy on around 77 lakh acres.

By this estimate, the state would need 77,000 machines which cost Rs 2-16 lakh. Even if we take the lowest cost (Rs 2 lakh), 77,000 machines would cost Rs 1,540 crore. Moreover, these machines go out of use after just one month of paddy harvesting.

Why do governments look for solutions to straw burning in heavy and costly machinery? A possible reason is the lure of subsidy. Punjab has received over Rs 1,000-crore subsidy from the Union government for these machines since 2018. All machines available under the subsidy scheme to individual farmers and groups are priced at rates much higher than the market rates. While the sellers enlisted under the scheme claim better standards of their products than machines available in the open market and hence the high rates, the truth is that technology rates usually go down with time. But that’s not the case with machines recommended to managed paddy straw. This difference in rates is what benefits the corrupt elements who pocket public money while also fleecing the farmers.

Add to this the cost of operating these machines, including fuel consumption, and we will know that these presumed solutions are creating a new problem. Punjab is already saturated with machines. It has the highest farm power availability at 2.6 kW per hectare as compared to the all-India average of 1.5 kW. There is one tractor available for every 9 hectares of cultivable land in Punjab and the average use of tractors is less than 40 per cent of the 1,000 hours required for economic viability, according to the draft Punjab State Farmers’ Policy. While the machines have helped deal with labour shortage in the state and made work easier and faster, these have also resulted in high indebtedness among farmers because of high one-time investment as well as recurring operation and maintenance cost. A recent paper by NABARD suggests that the farm mechanisation sector in Punjab has an aggregate credit potential of Rs 4,747 crore, thanks to the push towards more machines, including those meant for straw management like Happy Seeder and Super Seeder.

Ex-situ solutions like biomass power plants and industrial boilers using straw as fuel also need high investment and remain unsustainable due to transportation and storage costs. In addition, taking the straw away from the fields denies the soil much-required nutrients from the straw and hence a higher volume of fertilisers has to be used.

What we need is a simple field-based solution that can dispose of the straw within the limited time window between paddy harvesting and sowing of the wheat crop.

The bio-decomposer solution promoted by the Indian Agricultural Research Institute (IARI) had raised hopes as a cost-effective cocktail of microorganisms that can decompose paddy straw in the field itself. Decomposers developed by private developers also claim to do the same job, but none of these meet the time criterion. The IARI’s bio-decomposer takes 20-25 days to decompose paddy straw, while the farmers in Punjab usually sow wheat within 7-10 days of paddy harvesting. This is why the bio-decomposer has not found much favour with the farmers in the state.

On the other hand, a cost-effective technique developed by a farmer does the same job in a shorter period. Gian Singh of Jairampur village in Kapurthala district used to burn paddy straw on his 30-acre land and get wheat yield of 20 quintals per acre. In 2017, he experimented with sprinkling wheat seeds with diammonium phosphate (DAP) fertiliser when the straw was still standing in the field. The straw is then cut with a reaper and covers the ground. The moisture maintained by water decomposes the straw over time, while wheat shoots sprout from below. The cost of this technique comes out to be Rs 700 per acre as compared to Rs 2,500-4,000 expenditure on hiring labour or seeder machines. The crop reaper, a common low-cost machine, is the only implement used here. This has not only helped Gian Singh achieve a better wheat yield of 23 quintals but also saves on irrigation water because the straw decomposes and increases organic matter in the soil, making the soil softer and more fertile, besides increasing its water-holding capacity.

Several farmers from Punjab, Haryana, Rajasthan and Madhya Pradesh are now dealing with surplus paddy straw through this method over one lakh acres of farmland. Starting from one acre in the first year, they cover their whole field area under this technique after getting good results. Farmers have also reported a decline in the fertiliser need and less incidence of weeds in the treated field, reducing the requirement of agro chemicals.

This method not only frees the farmers from the need to reach for the matchstick but also empowers them to modify it according to specific conditions in their fields, including the type of soil, wheat varieties they are sowing and whether they are going for chemical-based cultivation or organic farming. Those going for organic farming can use shredded mustard oil cake in place of DAP fertiliser.

It’s also essential to treat the seeds (40 kg per acre) with 10 gm per kg each of trichoderma and metarhizium anisopliae, which are biological agents that help prevent diseases in plants and promote growth. The straw left in rows by the combine harvester need to be evenly spread in the field. After broadcasting the seeds in north-south and east-west directions, the stubs of paddy straw standing in the field should be cut 3 inches above the ground with a cutter machine and the residue spread evenly before irrigating the field. This completes the sowing stage.

Since the soil is already high in moisture, the field requires less water and hence the next irrigation needs to be controlled. The first watering after sowing should be done only when the crop starts showing signs of water distress. Depending on the variety of wheat sown, the plants will either roll their leaves, droop or start to turn yellow in certain pockets of the field. The water given at the time of this irrigation should not stay in the field for more than 24 hours.

The government and agriculture experts should promote such techniques instead of batting for market-oriented solutions which will aggravate Punjab’s socio-economic and ecological crisis.

The author, an independent trainer in natural farming, is the state resource person for Punjab Agro and National Rural Livelihood Mission