The long-term solution lies in diversifying away from paddy, which has led to a precipitous decline in the water table across Punjab and adds a significant burden to the exchequer in the form of electricity subsidies. Farmers who have experimented with diversification in the past often switch back to paddy on account of poor market prices. The government must ensure that farmers who diversify away from paddy are protected from price volatility of the free market. 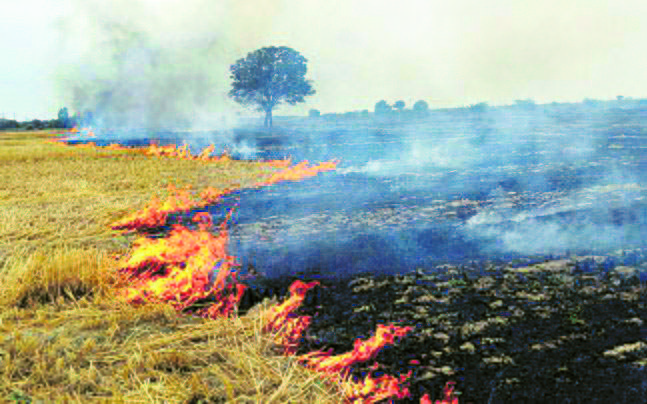 THE first fortnight of November witnessed a surge in cases of crop residue burning across Punjab. The number of farm fires in the state jumped from just over 200 in September to over 16,000 in October and a staggering 76,000 by November 20. This spike, coupled with unfavourable meteorological conditions such as northwest winds, low wind speeds, declining temperatures and emissions from local sources, has deteriorated air quality in North India, including Punjab, to alarming levels. 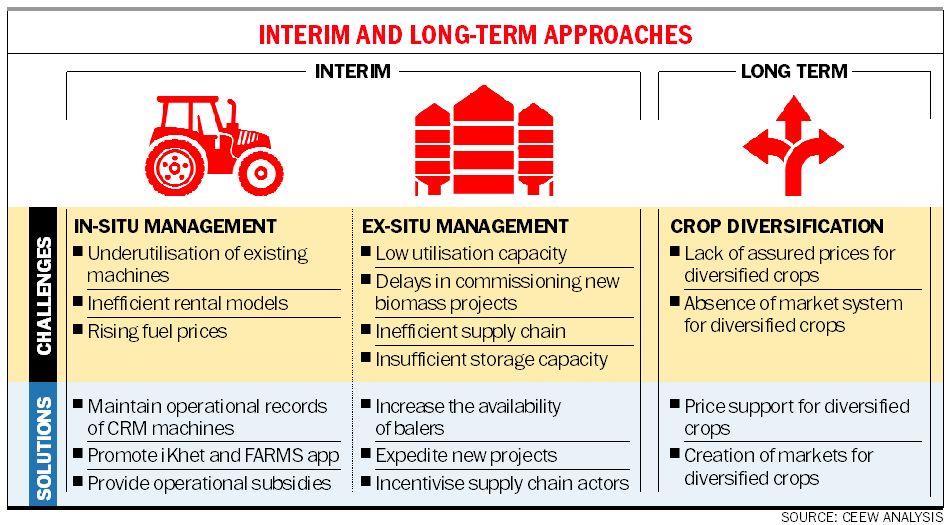 In the past few years, Central and state governments have taken several measures to discourage farmers from burning stubble. These range from the promotion of in-situ and ex-situ crop residue management to an outright ban on burning. In-situ management involves incorporating the residue back into the soil using Crop Residue Management (CRM) machines or through composting techniques. In ex-situ management, the residue is collected and supplied for other applications such as boiler fuel in industries and power plants, and in packaging material, among others. However, it is evident that these measures have failed to dissuade farmers from burning residue.

As the current kharif harvest season comes to an end, it is important that our policy-makers engage in a rigorous analysis of the reasons that kept the fields on fire yet again. While some of the measures taken by the Central and state governments are laudable, there are shortcomings within the existing solutions. Overcoming these challenges requires a combination of technologies and incentives. So, what could be done to improve the efficacy of the existing policies?

Ensure that existing CRM machines are operated at their maximum capacity. Financial assistance from the Union government through the ‘Promotion of Agricultural Mechanisation for In-Situ Management of Crop Residue’ scheme has led to a spurt in the availability of in-situ machines such as Happy and Super Seeders in Punjab. These are tractor-towed machines that plough the stubble into the ground and sow wheat. A recent study by the Council on Energy, Environment and Water (CEEW) indicates that the current stock of over 13,000 Happy and 17,000 Super Seeders can cover 66 per cent of the 25.81 lakh hectares under non-basmati paddy this year. However, most of these machines are likely to remain underutilised due to farmers’ unproven fears about the yield of wheat sown by these seeders and inefficient rental models. The deployment of these machines also faces logistic barriers. Two-thirds of these machines are owned by custom hiring centres (CHCs) and renting them from a CHC is an economically viable option for the 33 per cent small and marginal farmers of Punjab. By enhancing the subsidy on these machines to 80 per cent for farmer groups compared to 50 per cent available for individuals, the scheme also nudges buyers to approach CHCs. But these machines are unable to cover the designated geography due to inefficient logistic management, lack of manpower and delays in transportation. Farmers are often unsure of the timely arrival of the rented machines. This pushes them to either own a CRM machine or resort to burning the stubble. At present, there is no data on the deployment and usage of these machines; this makes it difficult to analyse their adoption rate. The government should mandate CHCs to maintain the operational record of these machines. This should include the name, contact details, landholding and rental dates of the farmers who rent these machines.

The state should use simple yet reliable technologies to popularise CHCs. The government’s emphasis has been on mobile applications such as FARMS and Ikhet to improve rental access to these machines. However, with the Central government’s FARMS app being used just 21 times between September 2019 and September 2021 in Punjab, there is little evidence that such platforms work. During our interactions with the farming community in the state, we noted limited awareness about these apps. We suggest that the government should launch campaigns to popularise these apps and familiarise farmers with their interface. Further, the state government must broadcast the contact details of CHCs at the block level via text messages and WhatsApp which have much higher acceptance.

The state should look at the prospect of providing operational subsidies to small and marginal farmers. The steep rise (60 per cent since March 2020) in diesel prices has increased the operational cost of these CRM machines by up to 8 per cent this year. High fuel prices are proving to be a hurdle to the sustained use of these machines. Given the state’s inability to alter fuel prices substantially, we suggest direct benefit transfers to farmers who use these machines to compensate for the rising fuel prices. The state can utilise its network of panchayats, patwaris, agricultural officers and specially designated officers to identify and compensate users of these machines.

The state should ensure that ex-situ utilisation capacity is increased swiftly. Ex-situ crop residue management is highly acceptable among farmers as it does not alter their farmland and provides scope for additional income. The state has 11 biomass-based power plants with a capacity to manage 0.88 million tonnes of residue annually. This amounts to less than 6 per cent of the residue generated this year. The state was to commission two biomass power plants and two bio-CNG plants in the current year, and one bio-ethanol and four bio-CNG plants in late 2022 and 2023. These projects will increase the crop residue utilisation capacity to around 1.5 million tonnes per annum. However, these projects have faced delays. Ex-situ management also suffers from the lack of balers, storage capacity, supply chain actors, and skilled workforce to aggregate, store and supply the residue efficiently. The state needs to expedite the construction of new ex-situ facilities and incentivise such projects through various forms of subsidies to protect their competitiveness with other sources of energy.

The state government must provide matching incentives for diversifying away from the paddy-wheat monoculture. The long-term solution lies in diversifying away from paddy, which has led to a precipitous decline in the water table across the state and adds a significant burden to the exchequer in the form of electricity subsidies. Our interaction with farmers indicates that current price signals, marketing and procurement for crops other than paddy are not lucrative enough to support a transition away from paddy. Farmers who have experimented with diversification in the past often switch back to paddy on account of poor market prices. The government must ensure that farmers who diversify away from paddy are protected from the price volatility of the free market. This could take the form of input subsidies, Minimum Support Price or an insurance-like scheme.

Paddy residue burning has been a decades-old practice and the inadequacy of existing policies needs to be addressed swiftly. This issue needs collective action from various stakeholders within and beyond Punjab. Instead of breathing a sigh of relief after the conclusion of stubble burning this year, we must reflect on the learnings and prepare for the next one.

Kurinji is a Programme Associate and Prakash is a Consultant at the Council on Energy, Environment and Water