Retracing the steps of migrants 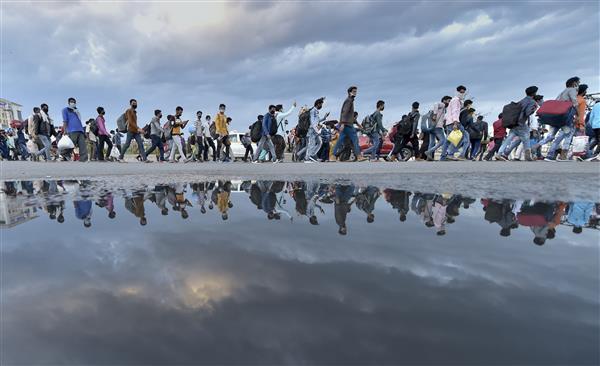 Migrant workers walk to their native places amid the nationwide complete lockdown, on the NH-24 near the Delhi-UP border on March 27, 2020. File photo: The Tribune, PTI

Four nights, three days, 500 km. Pappu Kumar Chauhan, a painter by profession, has faint recall of the toll the long walk home from Himachal Pradesh to Bihar took on his body. What he can’t let go of is the feeling of helplessness and insecurity injected by the March 24, 2020, lockdown. So, the moment he heard rumours of another impending shutdown in Punjab following a surge in Covid-19 cases last week, a panic-stricken Pappu — only recently employed, upon his return, for paint works in Zirakpur near Chandigarh — impulsively took the first bus home. “I’ve been through it once, not again,” he said over the phone. “No one bothered then, I didn’t expect anyone to this time too. I showed undue haste perhaps, but my mind told me to just leave, and I did.”

Last year, though, Pappu was averse to any such rush. He had stayed put in Sanjauli near Shimla once the lockdown was announced, hoping for the situation to improve. Soon, the city’s ‘heartlessness’ started to pinch. “We spent the first phase totally indoors. The contractor who had hired us provided us food and rations. But then he too couldn’t continue. Out of boredom, we would step out sometimes, but people in Sanjauli, even homes that had employed me as a gardener in the mornings, would threaten to call the police. I hadn’t expected them to help, but this behaviour hurt,” he rues.

Finally, out of money and stressed out, he and 11 of his co-workers from Bihar began their descent down the hills. They trekked down the thick forest; the road and the cops were to be avoided. From Pinjore, they turned towards Yamunanagar, and then Saharanpur, from where, he was told, buses were taking migrants to Purnea, Bihar. That was not to be. The bus dropped him way short, and he had to walk another 250 km to his village.

Those four days were long and tiring, the nights even longer, the feeling of morbidity gaining strength as the sun went down. The night before, the 12 men had hugged each other and cried, wailed actually, he confides. They had heard that the world would soon come to an end. “I didn’t want to die in a land that’s not mine. I wanted to go home, one last time if it was to be so,” he says. The wait had been deathly for him, his parents, two younger siblings, his wife and their newborn, who he has, ironically, named Lockdown. “He was born the day the lockdown was announced,” he tells.

Millions walked home between March and June. The Ministry of Labour and Employment puts the number at 1.06 crore, an independent estimate at 3 crore. A majority of them hailed from Uttar Pradesh and Bihar.

Ramesh from Hardoi, too, left his home of more than four years at Jagatpura in Chandigarh in the dead of the night on March 27 last year. “There were five of us. We didn’t have any money and the administration’s rations never reached us. My entire family was in the village. What if something happened to them? We left at night on our bicycles, paddling through villages, trying to stay away from the highways as cops had put up nakas there,” he says, speaking on the phone from his village, which he hasn’t since left (only one of his co-travellers has gathered the courage to return to Chandigarh; the others, his neighbours, want to wait for a little while more).

Langars on the way is where they ate food, by the roadside they slept. Sometimes villagers wouldn’t let them pass by, the good ones guided them towards detours, at times the cops helped too. Sleeping when tired, cycling when up — the entire journey took them a week.

The day the lockdown was imposed, Beyash, a rickshawpuller, remembers being taken aback at the unexpected rush at the market near the Amritsar railway station. “I was waiting for that one last passenger when I heard that curfew had been imposed,” says the 53-year-old from Motihari district in Bihar. Panicked residents were buying food, vegetables and other items. When he reached his room, all four of his roommates were already there. They spent the next 50 days in that dingy one-room accommodation amid anxiety, boredom and uncertainty. He finally boarded a train home on May 16 and returned to Amritsar in October. “All my savings are over. I need money to feed my family and for the treatment of my mother. I need to earn and save,” he says. But it is not the same anymore. There are fewer trains running, comparatively lesser people in the markets, says Beyash. Is he bitter? “The city was nice to us. There were langars to feed us. I am not bitter with them. We are poor people, we can’t ask for more. I can only complain to God. Who else?” he says.

The unorganised sector was hit the hardest. Pappu and his friends had money to survive on, but Santosh Kumar didn’t. The 26-year-old, a farm worker from Shahjahanpur in Uttar Pradesh, had just returned to Bathinda after spending the winter at his village. He had Rs500-600 with him when the lockdown was announced. He borrowed Rs3,000 from a relative to travel in a truck to UP. Fearing a police crackdown, the driver dropped them midway, after which he had to walk home for three days.

Tales of despair abound. And every migrant tells the same story — of money drying up, acquaintances turning their backs, hearts aching for home, of being fleeced en route to home. Pappu paid Rs300 for withdrawing Rs3,000 from an ATM. Twenty-five-year-old Anil Kumar was luckier. Though he went walking from Amritsar to Ambala, he was able to get government help — stay and transport — thereafter. However, the government machinery moved slow; it took him nine days to reach his village.

Radhe Shyam, from UP, lost his unborn child — the journey had been too much for his eight-month pregnant wife. Siya Ram, from Madhya Pradesh, became father to a son as soon as he reached home, but the child was diagnosed with jaundice. Home they were, but all the savings soon dried up and the two are back in Ludhiana.

In all these stories, the protagonists change, but their fate remains the same. The harrowing journeys home brought them face to face with realities that had forced them to leave their villages in the first place. Villages no longer provide subsistence. With no or little landholdings, survival is a tightrope walk.

Santosh, upon his return home after the long, arduous journey, was greeted by a family living on dal and rice donated by villagers. He panicked, and two months later, boarded a bus for Punjab sent by landlords for transplanting paddy. “I come to Punjab every year as I make Rs35,000 to 40,000 from transplanting paddy over 40 days,” he says. Girish Chander, who repairs folding beds in Jalandhar, had cycled via Yamunanagar. “For nine months, we survived on meagre income from our 2-acre field. Soon, it was clear that we won’t be able to live here for long.” They soon returned by bus. But people have been avoiding inviting them inside their homes. Work as such is slow. “I have kids to feed. I have been going house to house, asking people if they need my services. Life has been unfair to us migrants, suffering for no fault of ours. But we have to make peace with it,” Girish Chander says.

Longed to be home

I didn’t want to die in a land that’s not mine. I wanted to go home, one last time if it was to be so. —Pappu Kumar Chauhan, Purnea, Bihar

We left at night

There were five of us. We didn’t have any money and the UT Administration’s rations never reached us. —Ramesh | Hardoi, UP

No help at all

We stayed in our village for two months, without any work or help from the government and relatives. —Sukhya | Raebareli, UP

Not bitter with city

Amritsar city was nice to us. There were langars to feed us. I am not bitter with people. We are poor, can’t ask for more. —Beyash | Motihari, Bihar

Earning two square meals in the village is tough. Whatever work is available is away from villages. Sukhya, who works at a gaushala in Sangrur, feels life in his UP village isn’t worth living. “We stayed there for around two months without any work or help from the government, friends and relatives. We decided to come back and finally reached here after paying Rs8,000 to a tempo driver,” he says, as he vows to never leave Sangrur again. “This is home for me now.” Similarly, Suresh, who carried his specially-abled five-year-old child on his shoulder to Bihar last year, is back. “We had left Ludhiana in a state of shock. But the village had no jobs for us,” he says.

Back in the village for the second time, Pappu Kumar Chauhan sounds restless. “I earn around Rs11,000 and save nothing. In the city, the savings are double of what I make here,” he says, the irritation in his voice discernible. Unsure and insecure in the city, unhappy in the village, his choices are limited. Return, he says, he will have to. “Gareeb aadmi hain. Aayenge nahi toh kya karenge.”