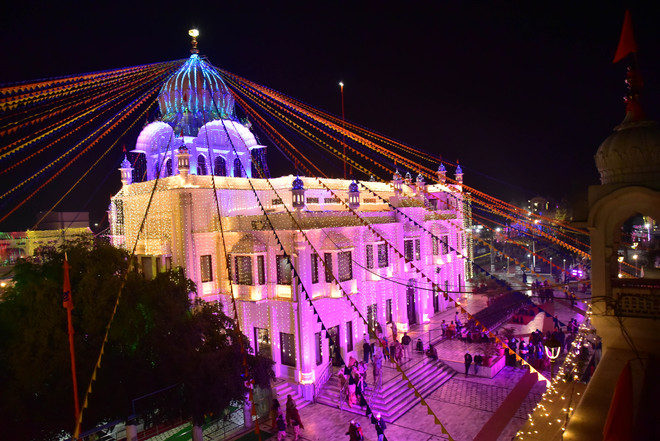 NIGHT VIEW An illuminated historical Gurdwara Ber Sahib, a day ahead of Parkash Purb of Guru Nanak Dev. It is here that the first Sikh master attained enlightenment.

As 552nd Parkash Purb of Guru Nanak falls today, devotees from all across the region have already started visiting the holy town of Sultanpur Lodhi. Tribune lensmen Malkiat Singh captures the various historical and sacred sites in the town, which hold reverence for the followers.

Amritsar Bungas: On the brink of extinction

SINCE the 550th Guru Nanak gurpurab celebrations, Sultanpur Lodhi town falling in Kapurthala district has emerged as one of the most common pilgrimage sites. It is here that the guru attained enlightenment after taking a dip in the holy waters of Bein.

He stayed in this town for 14 years and used to meditate under the Ber tree, where Gurdwara Ber Sahib stands. The present building of the gurdwara was built by Maharaja Jagatjit Singh of Kapurthala.

After attaining enlightenment, the guru had emerged from a spot 2-km upstream where now Gurdwara Sant Ghat has been renovated. The guru uttered his first words, “No one is Hindu, no one is Muslim” here.

Besides, Gurdwara Ber Sahib and Gurdwara Sant Ghat, the town has other historical gurdwaras all of which have been renovated nearly two years ago. These include Gurdwara Hatt Sahib where the stones used by the guru as weights during his job in a provision store have been kept.

Gurdwara Kothri Sahib, Gurdwara Guru Ka Bagh, Gurdwara Antaryamta, Gurdwara Sehra Sahib and Gurdwara Bebe Nanki are also other shrines where the sangat visits on this holy day and round the year.

Ahead of the gurpurab, nagar kirtans were taken out today. One nagar kirtan was also taken out by environmentalist Balbir Singh Seechewal where in a palanquin of Guru Granth Sahib decorated with strings of flowers went past several villages.

The participating jathas recited hymns spreading across the guru’s message and teachings among members of the community.