Save every drop of water

Punjab needs to go all out to curb overexploitation of groundwater 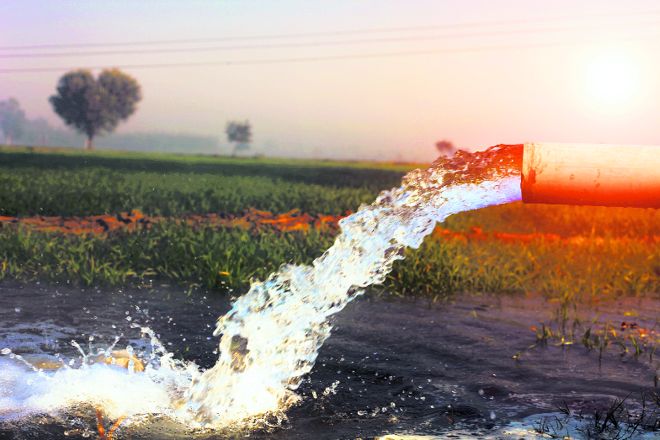 The state of affairs regarding groundwater extraction in Punjab remains dismal, despite the alarm bells rung by the Central Ground Water Board (CGWB), the Union Government’s groundwater monitoring agency that fears the state may turn into a desert in the next 20-25 years.

In Punjab, the extraction of underground water, as per the CGWB report, was 149 per cent in 2013 and 152 per cent in 2016-17; the latest figure is even higher — 165 per cent. Underground water recharging was 21.58 billion cubic metres (BCM) annually, while the gross water withdrawal was 35.78 BCM. As per a study of Punjab Agricultural University (PAU) regarding groundwater fluctuations over a period of 28 years (1988-2016), there has been an average fall of 51 cm annually.

The Atal Bhujal Yojana, launched recently by the Union Jal Shakti Ministry, is aimed at groundwater revival by strengthening resource management and bringing about behavioural changes at the community level. However, the scheme has not yet included Punjab.

The Green Revolution of the 1960-70s drove Punjab’s farmers to the monoculture farming of wheat and paddy, demanding increased irrigation water. During the 1970s, there were an estimated 1.92 lakh tubewells in the state. The number increased to 6 lakh in the 1980s and is now above 14.3 lakh.

Paddy (coarse rice grain) is a great guzzler of water. Research has shown that it takes more than three times the water to grow paddy in Punjab compared to the flooded plains of Bihar or West Bengal.

Paddy cultivation was also incentivised due to the state’s policy of free power, besides efficient procurement. Successive governments have avoided tinkering with the power subsidy so as not to lose the key vote bank of farmers.

Avtar Singh, a marginal farmer owning 4 acres at Naushehra Dhalla in Tarn Taran district, says, “It’s true that cotton, maize and pulses consume lesser amount of water in comparison to paddy, but what has the government done to make it a profitable venture?”

Agriculture Secretary KS Pannu agrees that the main culprit is paddy, but he hastens to add that farmers are being discouraged from sowing paddy well before the onset of monsoon. Modalities are also being worked out to offer techniques which require judicious use of water for irrigation of paddy, he adds.

“Around 7.5 lakh acres have already been diversified to alternative crops and an equal chunk is aimed to be added. We are also working out if paddy can be planted without puddling (waterlogging), like wheat,” he says.

He says the state government’s water regulatory commission is in the offing as the notification in this regard has already been passed. “This commission will monitor the water balance and its utilisation in different pockets of the state. Policies would be framed accordingly,” he says.

An agriculture official, preferring anonymity, says that in the current Budget, the state government has kept a provision of around Rs 8,900 crore to supply free power for irrigation.

Rattan Singh Randhawa, general secretary of the Border Area Sangharsh Committee, says, “Why doesn’t the government withdraw power subsidy to 46 per cent landlord farmers? It has not been done because a majority of them are politicians, industrialists and bigwigs associated with the government machinery. Also, steps should be taken to offer canal-based irrigation methodology, preserve rainwater and fill the dried-out village ponds,” he adds.

Dr Adarsh Pal Vig, Professor, Botanical & Environmental Sciences, Guru Nanak Dev University, says the Centre has intervened with Atal Bhujal Yojana as states are not competent for water management. “We are not short of water, we are short of management. The three- month monsoon would be enough if we properly implement the water recharging projects. The solution is to conserve and recharge groundwater by rainwater harvesting, building small check dams, constructing village ponds, waste water recycling and using it more wisely by less pollution. The crisis is due to overexploitation of groundwater — an increase in the number of tubewells, a decrease in the number of village ponds, wells, water structures, non-utilisation of surplus canal water etc.,” he says.

The groundwater depth ranges between 10-20 mbgl (metres below ground level). Cities like Amritsar, Jalandhar, Patiala, Ludhiana, Patiala and Sangrur have a depth of more than 20 mbgl. In Garhshankar block of Hoshiarpur, the water level is deeper than 50 metres.

The CGWB had included 138 blocks in its assessment, of which 103 are overexploited, five are critical, four semi-critical and 25 blocks, including Ferozepur, Bathinda, Muktsar and Fazilka, fall in the safe category as water is extracted less due to its salinity, thus improving the water table.

Around 21 pilot projects on artificial recharging are in the pipeline, including at Bhattian Canal Colony, Ludhiana; Patiala Nadi in Patiala; and Channian village in Jalandhar district.