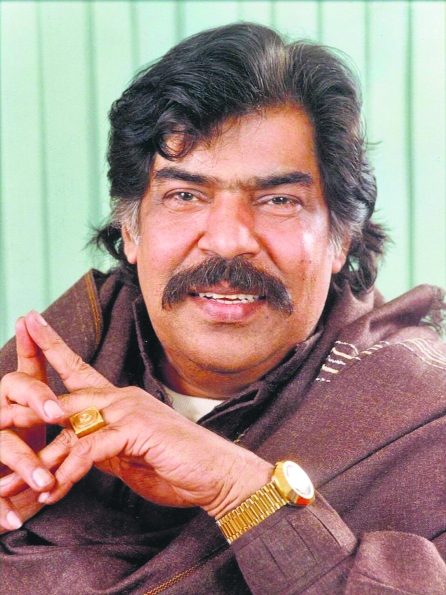 And Shaukat Ali was a true son of the soil, who, when he lived, he lived for the idea of Punjab, and now when he is no more, he unites his fans on either side of the border. The song, ‘Ni waghe diye sarhade’, was written by Chan Jandialvi and sung by many, but it is Shaukat Ali’s rendition that gives goosebumps each time. The voice still resonates, it will resonate for long.

Shaukat Ali was born in Pakistan but represented what is hailed as the shared cultural heritage of the two Punjabs. His career spanned six decades. He found fame early on with his song, ‘Kannu door door rende ho’, recorded by HMV. His oeuvre included Punjabi folk, Urdu ghazals and nationalistic songs. However, his heart beat for Punjab. He hated the border, but would often light candles in the wind at Wagah when Kuldip Nayar gave the call. He hated Samjhauta Express, but made endless journeys on it to meet his extended family here. He would say it should rather be called ‘Bichhoda Express’ and would confess being the saddest on his return journey.

His most famous rendition would perhaps be Mian Muhammad Bakhsh’s ‘Dushman mare te’, from his qissa ‘Saif ul Malook’. The 40-45 minute record has been sung by hundreds in India and Punjab, but Shaukat Ali’s version is said to be the best. He also sang ‘Chhalla’ long before it became a sort of ritual to sing one. Bollywood had a date with him too when his song ‘Kadi te has bol’was featured in Imtiaz Ali’s 2009 film ‘Love Aaj Kal’.

Shaukat Ali’s fame predated the era of TV. Riding on radio waves, he was making fans all over Pakistan and in India. As he would break into ‘Dushman mare te’ over Radio Lahore, a young Gurdas Maan, who was to soon earn his own legions of fans the world over, would get goosebumps here in India. “I was in college and a fan of Shaukat Ali saab. The pitch that he so effortlessly touched was a rarity. His voice had the ‘radka’ of vanjhali and the ‘khanak’ of been lahariya. He was unmatched,” he remembers. Maan was to meet him a few years later, at singer-turned-politician Bhagwant Mann’s wedding. “He was already singing when I reached and luckily found a place right in front of him. Just then someone spilled juice all over me. He left singing midway and gave me a cloth to clean myself. He exuded such warmth,” Maan recalls.

Fans they all were — singers Maan, Hans Raj Hans, Jasbir Jassi, poet Gurbhajan Gill — and friends they become. His passing away saddens Gill, whose friendship with Shaukat Ali dates back several decades.

Gill shares that in 1996, when Shaukat Ali was here for a programme in Mohali along with Pakistani singers Reshma and Akram Rahi among others, he had gone to receive them at Amritsar and wanted to take them out for lunch when Shaukat Ali saab expressed his desire to pay obeisance at the Golden Temple and have kadah parshad before he put a morsel in his mouth. “At Darbar Sahib, at the request of the public relations officials, he recited a few shabads from Gurbani, beginning with Sant Kabir’s ‘Awwal allah noor upaya’. The other singers joined too. It was an overwhelming experience,” he recalls. His meetings with Shaukat Ali were many and all memorable ones, his son calling him ‘Chacha’, the meetings turning less formal as time passed away.

His warmth spanned seasons of hate and camaraderie between the two nations, says Member Parliament Bhagwant Mann. “During my wedding in 1998, India and Pakistan were not on very cordial terms, but he still came — with pagdis and clothes for all of us here. And we sent him back with laddoos,” he recalls. The friendship continued. “Shaukat saab was so happy when I got elected to Parliament. He called me to congratulate.” His death, says Mann, has been a great loss for both the Punjabs. “So many singers have earned their bread and butter by singing his compositions.”

Canada-based broadcaster Iqbal Mahal, who was a close friend of Shaukat Ali, says his songs were all steeped in Punjabiyat. “If he was nationalistic, he was also a votary of good ties between India and Pakistan. And his music became the bridge between the two countries.”

With the passing away of Shaukat Ali, does the bridge stand weakened, we ask Maan and he says many more would come up. “And they are. Look at Coke Studio. It is full of talented Punjabi singers. They will reach their heights in due time,” he believes.

Gill says the younger generation singers in Pakistan are reinventing their roots. He feels they are well adapting to changed tastes and says the onus is now on the government and the media to present them as the new icons. “People need to know about them. I have also requested for portraits of Pakistani Punjabi icons such as Mehdi Hassan, Nusrat Fateh Ali Khan, Reshma, Shaukat Ali, Noor Jehan and Inayat Hussain Bhatti to be put up on the walls of Punjab Arts Council, Chandigarh. These people are as much our icons as Yamla Jatt and Surinder Kaur,” he says, adding, “They can’t be bound by territories. People love them in both India and Pakistan and this love is strong.”

Maan couldn’t agree more. He says music is like birds and streams. “None has been stopped. None can be stopped.”