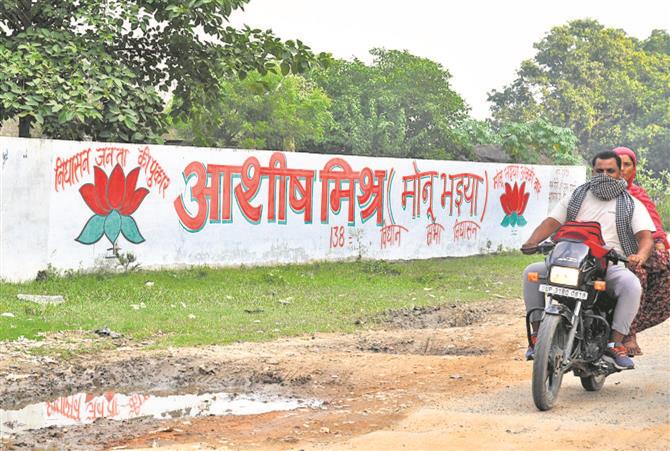 A boundary wall with the name of Ashish Mishra, the son of Kheri MP Ajay Mishra. Ashish faces murder charges over the October 3 incident.

Across vast swathes of Uttar Pradesh’s Nighasan Assembly segment in the Kheri parliamentary constituency which he represents, Union Minister of State for Home Ajay Kumar Mishra is popularly called ‘Teni Maharaj’ or ‘Maharaj’.

The sobriquet reflects a simultaneous sense of awe and fear that Mishra, 60, inspires among his constituents.

A highly prosperous trader of UP’s Terai belt with stakes in rice mills and petrol pumps, Ajay Mishra, at the heart of the October 3 violence, entered electoral politics in 2012, winning the Nighasan MLA seat on BJP’s nomination.

An important Brahmin face of the party, his forays into politics date to 2009 when he won the zila panchayat member elections as an Independent. For someone nine years old in electoral politics (he won the Kheri Lok Sabha seat in 2014 and 2019), Mishra’s rise to the top and recent inclusion in the Union Council of Ministers has been spectacular.

With the Yogi Adityanath government on the backfoot over several crimes against Brahmins, the fear of alienating the community is one reason why the BJP is finding it hard to sack Mishra on election eve.

Ask around in the area for his strengths and people are hardly surprised at his meteoric rise. They speak openly of his “resourcefulness, ability to deliver quick justice and organisational abilities”.

Locals point equally to his complex and disturbing past, including the gravest charge of murder he has faced so far among other serious accusations.

Mishra was named as an accused in the July 8, 2000, murder of Prabhat Gupta, 23, a Nighasan resident, over local rivalries. After he was acquitted by the district court in 2004, Prabhat’s family filed an appeal in the Allahabad High Court.

Judgment in the case stands reserved since March 12, 2018, with the family appealing against the delay too.

“Ask around how Comrade Gurdev Singh died, about what happened to Harpal Singh, and why Harpal Singh’s family left the area for good. There are layers and layers waiting to be unravelled, but who will do that is the question. I am alive because of the High Court’s protection. Otherwise anything could have happened to me,” says Rajiv Gupta, the brother of Prabhat Gupta.

The first FIR Ajay Mishra faced was in 1990 for alleged hurt with dangerous weapons. In 1996, a history sheet was opened at Tikonia police station. It was soon closed. In 2005, a village head accused him of assault. No charges were proved against Mishra, whose house in Nighasan is 3 km from the Nepal border.

“Most people fear him in Banbirpur, but we are not afraid,” says Nighasan resident Chandra Mohan Maurya, pointing to Mishra’s recent threat to protesting farmers.

While his strongman image is a given, many locals also vouch for the Minister’s helpful ways. Mishra is famous in the area for quick redressal of grievances through weekly outreaches. “Teni Maharaj ko kushti bahut pasand hai,” says Nighasan resident Kuldeep Rathore, pointing to Mishra’s favoured sport: wrestling.

Every year on October 2, the junior Home Minister organises ‘dangal’ at Banbirpur in the memory of his late father. This year, it was held on October 3. It was in protest against this event that the farmers had gathered at a nearby college playground in droves.

Eight people were killed that day, four allegedly mowed down by the SUVs belonging to Ajay Mishra and his aides.

Mishra’s son Ashish, accused of being in one of the SUVs, now faces murder charges. The sudden developments have put brakes on his plans to launch Ashish as a BJP candidate from Nighasan next year. The seat is held by BJP’s Shashank Verma, the son of the late Cooperatives Minister Ram Kumar Verma, Ajay Mishra’s mentor in politics.