The fascinating story of Sophia Plowden, chronicler of Persian and Hindustani songs of nautch performers at 18th century Lucknow court 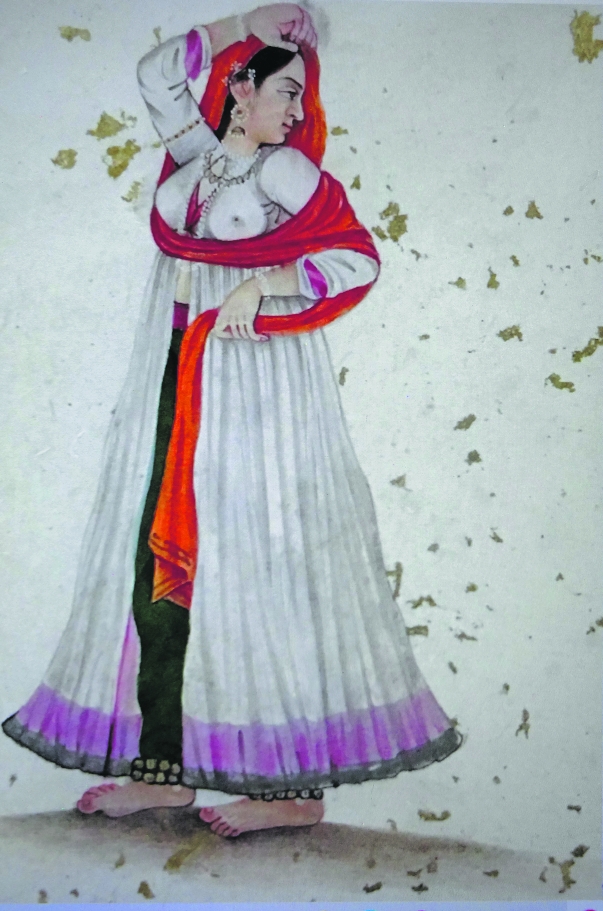 Among the British Library’s extraordinary collection of materials relating to the history of Indian music in the eighteenth and early nineteenth centuries lie dozens of European accounts of the nautch — intimate musical parties at which troupes of high-status North Indian courtesans would sing, dance, recite poetry, and match wits with the assembled company, often to mark special occasions.

Having read, and sometimes written on, many accounts of Europeans, including Englishmen, who came and lived in India in the 18th century, I was often struck by how little interest, serious interest I mean, they took in Indian music. This, despite some visual evidence that has survived showing men like the British General, Sir David Ochterlony, and the Swiss engineer/adventurer, Antoine Polier, seated more or less Indian fashion on the floor, watching dancing girls performing for them. The general feeling one got is that whenever musicians — playing by themselves or accompanying dancing girls for the nautch — were called in by their Indian patrons for entertaining foreign guests, the visitors began to wilt as the night advanced and the music went on: ‘endlessly’ from their point of view. Everything was unfamiliar to them: the language, the cultural context, the music, all the movements and gestures, or their meanings.

It is against this background that I was taken by surprise when I came upon a delightful account of a performance in the British Library — which, as we know, is a real cultural institution, very different from the libraries that we know from our own land — that brought to life Indian music of the 18th century through a performance. This was two years, or thereabouts, ago and was the work of a scholar dedicated to the history of Indian music of the past: Katherine Butler Schofield. She had, other things apart, made a serious study of the surprisingly detailed work of an Englishwoman — Sophia Plowden, whom I confess I had never heard of till now — who, married to an officer of the East India Company, was a resident in India from 1777 to 1790, and spent valuable time in Lucknow when it was ruled by Nawab Asifuddaula.

It is not easy to visualise Sophia as a serious researcher — she is described as ‘a middle-aged matron of 10 children’ — who returned to London and settled down in Harley Street. But, as the note on her says, in her younger days she spent her time ‘collecting and performing the Persian and Hindustani songs of nautch performers at the Lucknow court’. Among those performers was one in particular who caught her attention: Khanum Jan, a courtesan of Kashmiri origin. It is she who figures in the title of one of Katherine’s presentations: “The Courtesan and the Memsahib”, she being the ‘courtesan’ and Sophia Plowden being the ‘memsahib’. Sophia, one learns, got very close to Khanum Jan — the tall young woman performing for Col Polier in an oft-reproduced painting — and records in the diary she wrote while in India how, and how often, she used to meet Khanum. The lissome courtesan was evidently at home both in Persian and Urdu and would sing compositions ranging from those of great Persian poets like Hafiz and Khusro, to those of Urdu — then called rekhta — poets like Mirza Muhammad Rafi “Sauda’’, famous for his paengyrics and ghazals.

Whether Sophia learnt the languages of those songs herself one does not know, but certainly she heard them with care and passion, got the import if not the exact words, and then got calligraphers to write them down. What stands out in all this effort is the fact that Sophia herself wrote down Khanum’s songs in European notation: something that seems hardly ever to have been done. These notations led to these songs being turned into ‘harmonised arrangements for the harpsichord’. As Katherine notes, they “were published to great acclaim by William Hamilton Bird in Calcutta in 1789”. And then they were played — these European style salon pieces which came to be called ‘Hindustani Airs’ — becoming ‘all the rage in drawing rooms across the British Empire from Inverness to Singapore’. At the presentation in the British Library in 2018, “The Courtesan and the Memsahib”, some of them were performed by Katherine with the celebrated harpsichordist, Jane Chapman. Other voices were featured too, but outstanding is the fact that in the singing, the recordings of great vocalists like Kesarbai Kerkar and Gangubai Hangal, were also played for completing the experience of the listeners. One can imagine that it must have been quite an experience.

There is still more in the experience, however. For when Sophia Plowden returned from India to her home in London, she took back with her several loose leaf folios that featured whole poems — some in Persian, others in Urdu — calligraphed in a fine hand. There were captions at the top and — a poetic bonus, so to speak — a painting in the top left corner, illustrating or feeding the verse: women singing together, all seated on a floor, jostling one another; a saqi — ‘wine bearer’: what else can one call her?; a nayika, for instance. These folios were once, as Katherine says, treated simply as ‘miniatures’, but that they related to music, and to the lyrics sung at that time, was not quite realised till late. They are now in the Fitzwilliam Museum in Cambridge, just as the music notations are in the British Library. A fragment of India; ‘a journey to the underworld of the Indian musical past’, as Katherine calls it: whatever. What these objects evoke are images and sounds: certainly an image like that of the seductive Khanum Jan dancing and singing those simple but movingly lyrical words of Mirza Sauda’: Maine tumko dil diya/tune mujhe ruswa kiya// Maine tumse kya kiya/aur tune mujhse kya kiya.