The one and only: Paramjit is working for revival of embroidered artworks & has created an elegant masterpiece, a one-of-a-kind with thread 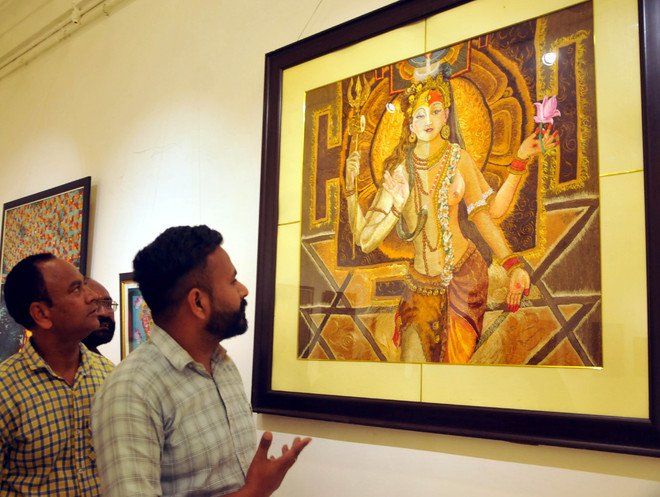 The Ardhnareshwar painting made through intricate thread embroidery on display at Art Gallery in Amritsar on Wednesday. Tribune photo: Vishal Kumar

This piece is sure to leave you open-mouthed. So will its price tag — Rs25 lakh — that seems valid when the artist has rolled away five to six hours each day for a year. To top it, the artwork was done through with only a cotton thread, which only veneers its distinction.

Ardhnarishwara, a half Shiva and half Parvati composite form represents the male and female energy and has been ever popular among artists. Its different variations and depiction through modern as well as folk art forms have been symbolic. But city-based handicrafts artist Paramjit Kaur has disintegrated from the lot to muster ardhanarishwara with thread embroidery.

The meticulously done painting has been displayed at the art exhibition hosted by IAFA at the Art Gallery to mark the International Women’s Day. “In this painting, I used a cotton thread as medium and phulkari stitches in an attempt to popularise the traditional work from Punjab. This particular painting took six months of conception and attempts, as even one stitch gone wrong could impact the entire painting’s composition,” she tells.

She has been involved in creating and designing handicrafts and handloom products for past 20 years. “The stitches used in the painting were complicated as I had to use thread for details like creating the conjoining of the two forms and even the body postures and hand gestures…these are very difficult to get using a thread,” Any artist who would dwell upon the end result would know what’s she’s talking about.

The exquisite work is surely going to drill a deep hole in the pockets of those enamoured by it. But: “it’s the first and only ardhnarishwara painting done with thread,” justifies the recipient of the National Merit Award. The honour was given away by the Ministry of Textiles in 2018 for her painting, a 4X4 depiction of the Golden Temple along with 10 Sikh gurus using a silk thread.

Paramjit is a woman on a mission working with embroideries and seeking revival of heritage embroideries of Punjab for past 10 years through various projects. She believes that purpose of art should not be forgotten. “Bebe Nanki had hand-embroidered the chola for Guru Nanak Dev and it’s still revered as piece of our history and heritage. Similarly, the handicrafts, especially the embroideries from Punjab must be preserved and given their due place today.” She has been working in association with Ministry of Textiles’ project to develop and promote handicrafts, as an empanelled designer with them.

Through her self-help group — Gramin Vikas Handicrafts Women and Children Welfare Society — she has skilled and registered 2,000 women in this craft and continues to train more.