Covid-19 has questioned the relevance of high-investment, high-density cities with their gleaming skyscrapers. There is talk of return to smaller organic satellite and suburban towns with greenery and cleaner air . 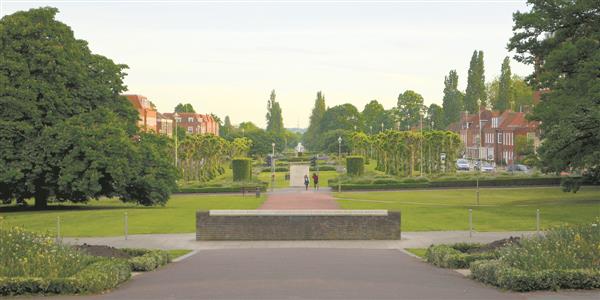 “If mankind is to live on, the urban pattern

he occupies will require major unravelling

Does it take calamities to create new city models? History of urbanisation seems to suggest so. Most global metropolises underwent major renewals following manmade or natural catastrophes: be it London, Paris or Chicago. And now, the post-Covid-19 city, too, will have to be reimagined.

Even when the pandemic subsides, the assumption that city life will return to the old ‘normal’ is unlikely to happen. The propensity for pandemic hotspots to sprout predominantly in dense, poorer and polluted urban clusters will make people tell themselves, ‘governments cannot ensure our health safety, we must secure ourselves’. In India, heart-wrenching defining images of lakhs of migrant workers trudging back to their rural homes, hundreds of miles away, echo that.

Not surprisingly, most Covid hotspots in India are congested, low-income, slummy urban clusters that not only bear overwhelming disease burden, but also the brunt of air pollution and water contamination issues. Cities, especially metropolitan ones like Mumbai and Delhi, are also abodes of sharp inequalities and rich-poor divide. Antillia — Mukesh Ambani’s skyscraper villa — soars high above the shanties of Dharavi of Mumbai, symbolising discordant scales of privilege and poverty.

In the developed world, too, there have been sharp differences in Covid-19 cases depending upon urban densities. New York, one of the most crowded cities in America, remained at the global top of the pandemic’s mayhem curve with 20,000 dying over three months till the recent dip. By night, the Manhattan Island holds 1.6 million population that doubles in the morning, with people pouring in like high tide, crowding up its offices, coffee shops, streets and iconic plazas like the Times Square. Most of them are empty now.

Ironically since late 20th century, urban planners and economists serenaded the rise of big cities globally. Harvard University don Edward Glaeser, in his book Triumph of the City, called them ‘engines of growth.’ Other planners, too, drum-beated that urban density increases, ‘workers’ productivity and minimises their carbon footprint’. It was argued that megacities with high densities enable economies of scale and bring together talent, generating new ideas and innovations through multi-disciplinary interactions. By 2016, more than a fifth of humankind was living in cities of 1 million people or more. The largest 300 metropolitan areas now generate half of the world’s wealth. But Covid-19 has questioned the relevance of such high-investment, high-density cities with their gleaming skyscrapers in the world? There is talk of return to smaller organic satellite/suburban towns with greenery and cleaner air, assuring romanticised countryside lifestyles.

The urban-rural redux is not new. In the 19th century, coal-driven factories cast palls of smoke and pollution over most western industrial towns. However, Ebenezer Howard, an English court reporter, planner by avocation, changed all that with his book, Garden Cities of To-morrow, published in 1898. The Garden City aimed to marry the health benefits of nature with urban conveniences. It was to be encircled with an agricultural belt and industry was to be planned on its preserves, so that the poor could earn their living though at a little distance. Howard managed to get two Garden Cities built — Letchworth and Welwyn — in England; and in the United States, the suburb of Radburn in New Jersey, besides other such inspired townships. It is ironic though that the centenary celebrations of Welwyn city, slated for April 29 this year, had to be cancelled due to Covid!

The garden city in India

The Garden City idea took root in India during the colonial era with examples of Bengaluru (then Bangalore) and Edwin Lutyens’ New Delhi. In 1947, with the Partition of India, the East Punjab Government decided to build a new capital city at Chandigarh to fill up the void of Lahore going to Pakistan. A.L. Fletcher, a top bureaucrat tasked with the preparation of the brief for the new city was very impressed by Ebenezer Howard’s concept for Garden City and championed it as the inspirational model for Chandigarh project.

The original team of American architects and planners for Chandigarh comprising Albert Mayer and Mathew Nowicki, too, had been big proponents of the Garden City ideology. However, owing to tragic death of Nowicki in a plane crash the American team had to be soon replaced by Le Corbusier. But many of the green city ideas underlined by the Mayer team became precursors of what Corbusier also developed later on. In 1922, Corbusier had presented his model of the Ville Contemporaine, “a city of three million inhabitants that featured tall office towers surrounded by lower residential blocks in a park setting” that he fondly called the ‘Vertical Garden City’. Though eventually he had to make a horizontal ‘Garden City’in Chandigarh, it imbibes many of the core values he advocated for new-age cities. The fact that Chandigarh has done much better in containing Covid-19 endorses the relevance of such green cities in the future too.

Many experts forecast that the current, ‘working from home evolution is likely to turn into a working from home revolution’. In the future, the economic benefits of being packed tight in centralised offices might be lost if distant working that facilitates better living conditions, doesn’t dent urban economy much. The decline of densities in the urban realms will be loud and clear.

Since the paucity of land will inhibit establishment of large number of ‘green field’ cities, retro-fitting existing ones will become de rigueur. The sustainable city or green building will no longer be mere avant-garde buzzwords for city administrators. Rather, substantial reconfiguration of urban masses and open spaces will have to be fast tracked. Numerous technologies for erecting vertical green buildings are already in place and can be further refined and made cost-effective. London architects Foster + Partners’ vision sees city space transformed, “With parking consolidated in empty plots nearby, the street regains a community focus, with cyclists and pedestrians prioritised and the area reclaimed for planting, seating and more efficient waste management”.

It’s time then to reinvent the city.

Frequent epidemics were endemic to the old, filthy and dingy crowded London city. Soon after the bubonic plague in 1665-66 killed nearly 1,00,000 people, another catastrophe soon followed: the Great London Fire. Sir Christopher Wren prepared a new plan for old London as sought by the King. Similarly, Paris got rebuilt number of times due to calamities. In the middle of the 19th century, Voltaire, the great thinker, bemoaned of Paris “established in narrow streets, showing off their filthiness, spreading infection and causing continuing disorders”. However, when Napoléon III came to power, he tasked Georges Eugène Haussmann in 1853 to redevelop the decaying city. The Emperor instructed Haussmann to ‘aérer, unifier, et embellir Paris: to give it air and open space...to make it more beautiful’. Similarly, Chicago in America was rebuilt after the Great Chicago Fire of 1871. Daniel Burnham the visionary, master planner commissioned to reconfigure the city, had famously said, “Make no small plans; they have no magic to stir men’s blood.”

In India, the earlier JNNURM scheme and the present much drum-beated ‘Smart City’ project by the current government were expected to create magical urban transformations, but these have remained mostly paper exercises.