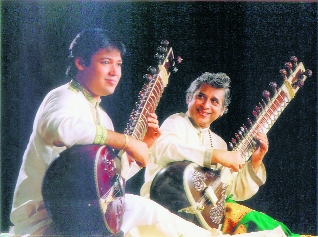 Pt Debu Chaudhuri with his son Pt Prateek Chaudhuri (L) Both died of Covid-19 within a week of each other recently. Photo courtesy: Avinash Pasricha

Born in Bangladesh, Pt Debu Chaudhuri moved to Delhi in the 1960s. He virtually established the music department at Delhi University. In the 1960s, teaching music en masse was looked down upon by elitist musicians, but Debu da was bold enough to choose this path.

Though representing an illustrious musical lineage (his guru Ustad Mushtaq Ali Khan was a descendant of Tansen), Debu da had no patrons. It was gradually through his hard work and talent that he established and distinguished himself and was awarded Padma Bhushan and Sangeet Natak Akademi award in recognition, among the many honours received.

Pt Rajan Mishra, also Padma Bhushan and Sangeet Natak Akademi awardee, belonged to a musicians’ family. He and his brother Sajan were invited by their uncle, sarangi maestro Pt Gopal Mishra, to Delhi in 1973. A welcoming response made them decide to stay on.

The journey of both maestros is somewhat similar — choosing to present a style of music that, at that time, was not the easier or the popular option. Pt Debu Chaudhuri had to establish his style of sitar when maestros like Ustad Vilayat Khan, Pt Ravi Shankar and Pt Nikhil Banerjee were already ruling. Rather than copy them, he stuck to his ‘taalim’. Choosing to continue playing the 17 fret rather than the 19-fret sitar, Debu da’s presentations were concise, never prolonged or gimmicky. He chose to play traditional compositions, as created by the elders of his gharana.

Similarly, Pt Rajan Mishra, the elder and the strategist of the duo, chose not to sing thumri and dadra in the initial years. During the 1970s, the Banaras gharana was famous for its thumri; made popular by stalwarts like Rasoolan Bai, Siddheshwari Devi and Girija Devi.

Pt Rajan Mishra’s senior disciple, vocalist Viraj Amar, recalls, “Guruji said initially we would choose to end our recitals with a bhajan or tappa, but never with a thumri. We had to establish ourselves primarily as masters of khayal.” This decision eventually paid dividends. The Mishra brothers’ opening of a raga through its composition, khayal, was unparalleled.

Both maestros were determined to make classical music popular among masses as well. Debu da did it through the university department while the Mishra brothers set religious texts to music to appeal to a wider audience. Both believed in the importance of teaching in the guru-shishya parampara and had established teaching institutions to pass on their learning.

Both, with charming, gregarious personalities, were immensely popular. Their wide circle of friends was not limited to the music world. They attributed everything to their gurus; with no attempt to take credit for the musical innovations they made. Both remained humble despite their enormous stature as musicians.

Pt Prateek Chaudhuri (49) passed away just a week after his father’s demise. Continuing Pt Debu Chaudhuri’s legacy of playing the 17-fret sitar, Prateek was an established artiste. His death has sent the music world into deep shock. Mourning the loss are also his students at Delhi University, where he taught in the department established by his father. He leaves behind two children; his young son Adhiraj also plays the sitar.

Their passing is an immense loss to the music world.