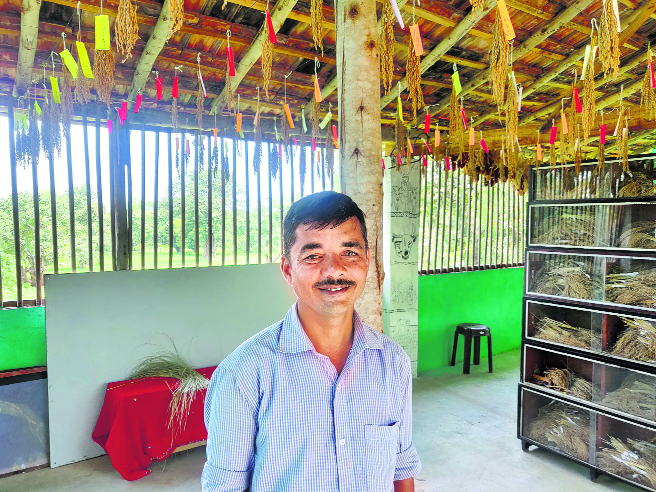 Did you know that there are more than 19,000 variants of traditional rice in India? And that there were lakhs of varieties of rice that have been lost? Well surprising as this may seem, it is true, and there are two Karnataka farmers who are working tirelessly to save the traditional paddy variants from extinction while adopting organic farming practices.

“Our focus remains on reviving the ‘lost’ traditional varieties and my main interest is exploration of man’s relationship with the land, food and the environment that surrounds us.” These words on a poster with a picture of Bhattada Boregowda, a paddy farmer who has set up a rice museum in Shivalli village in Mandya district catches your attention immediately. Started in 2009, this is the first rice museum set up by a farmer. The stairway to the museum has a colourful painting of Lord Balarama with his trademark ‘hal’ (plough) with the title ‘Farmer’s God’. Started by Boregowda, who is called Paddy Boregowda or Bhattada Boregowda (Bhatta means paddy in Kannada), the museum is home to a variety of rice variants. It also showcases some old farming tools in a large hall in his brother’s house. The walls are lined with awards and citations he has received and there are placards that detail the name, crop duration, yield per acre and season of the paddy varieties. The walls are beautifully painted with activities of paddy cultivation as well as ancillary activities like basket-weaving, cow-milking and the like. At one end of the wall is a massive painting that depicts a village that was executed by a Mumbai-based artist. “Once I learnt of lakhs of rice varieties that have been lost, I started collecting traditional varieties of rice and growing them. I felt that was necessary as the coming generations may not even know of the existence of these varieties if these are not conserved,” says Boregowda. He currently has collected more than 210 traditional varieties of rice. “In 2018, I noticed a distinct ear of paddy that seemed like Sona Masuri which I isolated and grew separately. Then I cultivated it in smaller patches, got the seeds and was able to grow over two acres. The new variety is called Sidda Sanna.”

The Rice Diversity Center in Kirugavalu in Malavalli Taluk has been setup by another farmer Syed Ghani Khan. This rice museum is located on the first floor of his house and displays more than 1,300 varieties of native rice. Incidentally, he also has an outdoor display of paddy that he grows in sacks and calls it a live museum. “I have grown 1,134 varieties of rice in a 30 by 40 square feet land, and this is to show how the different kinds of paddy look. Visitors can actually see paddy growing, which is a great way to showcase the variants,” says Khan. The museum has been developed after he received a grant from Nabard to the tune of Rs5 lakh and showcases paddy variants that are named with details like crop duration, stalk height, rice colour, region of origin, season, yield and typical characteristics. Placards are being developed for all variants and are printed in Kannada and English. In the museum, there are paddy ears hanging from the roof with small labels as well as lined up in bottles. One part of the museum’s ceiling also has a colourful display of corns growing in the farm. One can see paddy of different colours — white, brown, black and green as well as variants like saline, dry land, deep water and medicinal rice.

A visit to the two rice museums is an eye-opener in conservation and the need to preserve traditional paddy variants for generations to come.